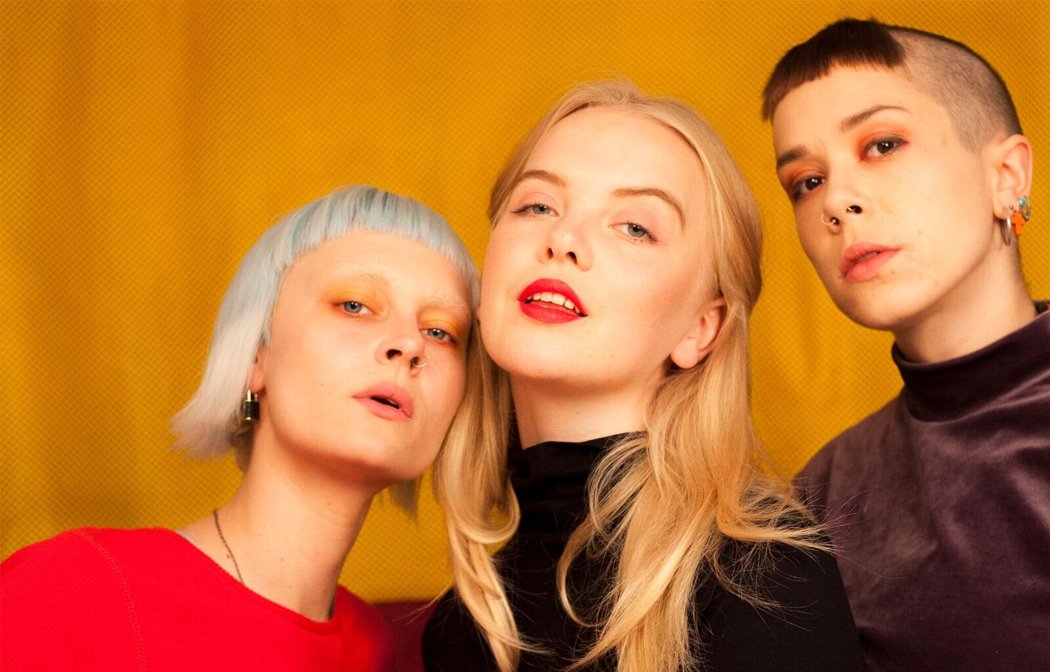 If there’s something the people of Brighton are ever proud of and thankful for, it’s the city’s roaring music scene – from the abundance of venues who showcase a variety of music for every taste, to the opportunities given to the many budding musicians who reside here. The same can be said for punk-pop trio Dream Wife. This fierce and fun-loving band consisting of Rakel Mjöll (vocals), Alice Go (guitar, vocals) and Bella Podpadec (bass, vocals) met in Brighton whilst studying a few years back and are a refreshingly original example of why our music scene here rocks.

Alice explains how the band are based in London now, but Brighton will always have a soft spot in their hearts. Having played at The Great Escape last year, the band were back again this year and played as part of Annie Mac’s Beach Party. “It’s nice for us to be back in Brighton, there’s always a good feeling there… kind of nostalgic,” she tells me. Although the three of them fully formed together here, Bella and Alice met back at a battle of the bands when they were only sixteen. Later, Bella and Rakel lived together at university, then on a sober night out they spoke about being in a band and went on from there.

I speak with Alice and the band about their self-titled debut album which came out in January this year. “We released the album and then four days later we went to Australia. It was an amazing time out there, but strange coming back to UK… It was an exciting time and has been ever since”.

Dream Wife had previously let out a self-produced EP, which they’ve described as a huge learning curve for all of them. With the album they’d wanted to bring the songs’ live energy to the records, so they recorded a lot on tapes. “It’s something you’ve been left alone with for a long time… then it’s out for everyone to listen to, it’s so surreal.” There was also the matter of understanding their own relationship with the songs, and the fragility musicians can feel when their work is exposed to the public. Alice offers that you need to be vulnerable when putting ideas together with the rest of the band, writing and creating songs in the practice room. “We all understand it together, and it makes it easier, and then easier to share with other people… there’s that strength and solidarity in terms of sharing songs that are personal to each of us for so many reasons… it can mean so many different things to so many different people.” That blissful sense of collectivism is one of the reasons the band are super excited to get into some festivals, including the excellent Standon Calling on Thurs 26 – Sun 29 July.

After they saw a circle pit happen at a gig in Germany, it stirred something inside them. Apparently Rakel is amazing at rallying a crowd, and it’s not as easy in a music venue, or club, so they plan to have the audience going wild at their performances, so watch out. They’re also elated by upcoming shows in Chicago and Japan, especially as none of them have ever been to Japan before, let alone performed there. “Everywhere we go its always exciting seeing how people respond to songs and what the audience is like because it’s always different in different places.”

We speak about their inspiration for their songs, Alice assuring me that they don’t question it too much. “It’s the stuff we’re into, the stuff we know, the stuff our friends are talking about and what surrounds us. It’s kind of our culture coming through into our music.” We then go on to the topic of gender – an all-female punk band is something that does not seem too frequent in the music industry or the media. “It’s impossible for us to say anything else. Growing up as women – that has just shaped who we are, but gender should be a secondary to us… a band shouldn’t just be a gender and we don’t want to shy away from questions about gender, but don’t want it to define us” says Alice. “It’s another way of not taking a woman seriously as a musician. It’s a way to digest a woman not as a hard-working musician, but kind of like an accessory to music.”