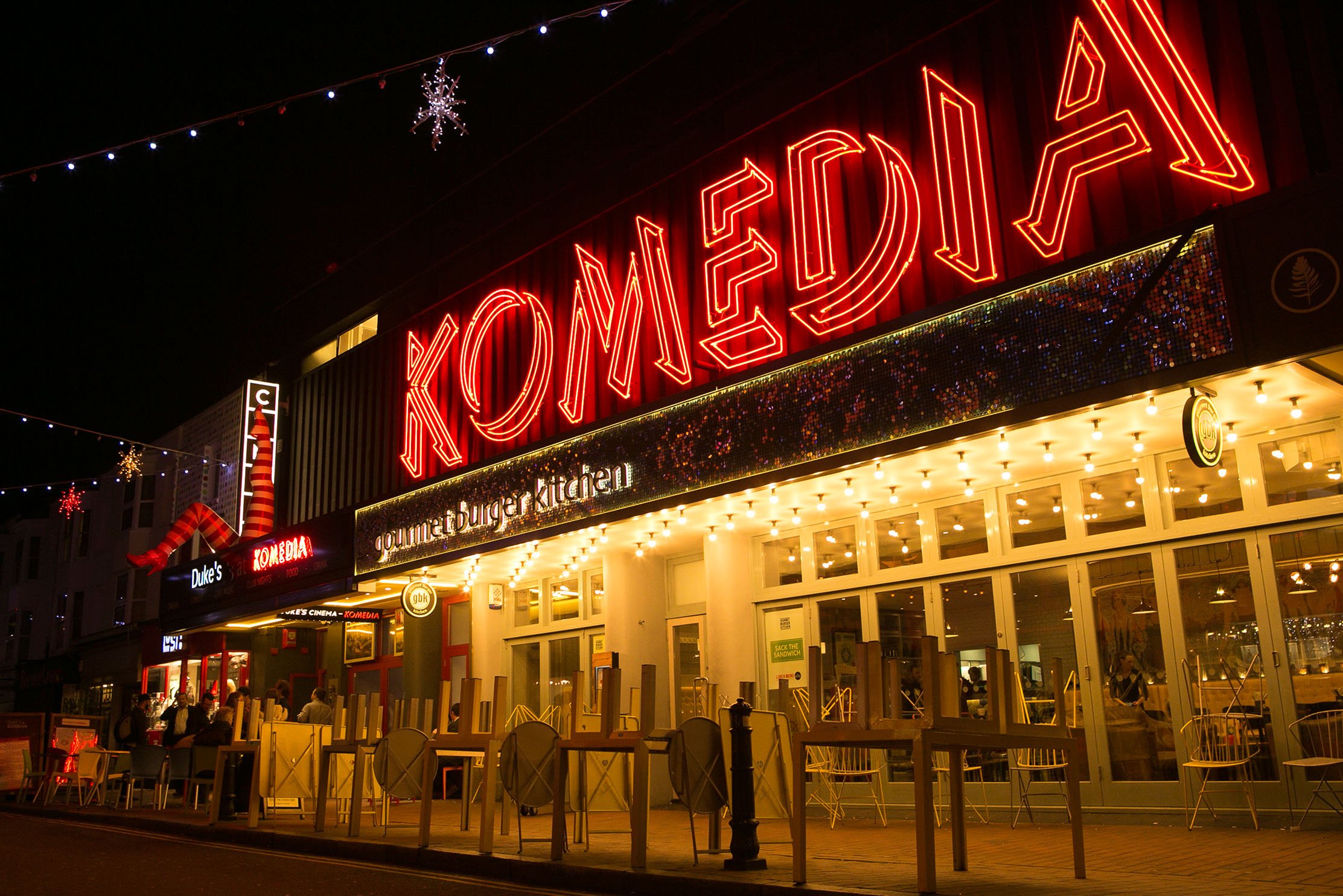 It’s hard to miss the Komedia and its sizeable neon signage on a stroll through North Laine, just as it’s hard to ignore the impact the venue has had on Brighton & Hove’s cultural landscape. This May sees the iconic mixed arts venue celebrate a weighty 25 years on the scene, and they’ll be marking the occasion in typical style. “It’s always been a very important month for us,” its co-founder, Colin Granger, tells me. “We spend a lot of time watching stuff and programming it. We’ve always taken May really seriously.” It’s all a long way from 1994, when he and his colleagues Marina Kobler and David Lavender purchased a former billiard hall in Brighton’s Kemptown.

Previously touring together as directors with Umbrella Theatre, the trio were wowed by Europe’s markedly different nightlife. “We saw these wonderful cabaret venues. People would have a meal there. We had an idea it would really work in this country.” While his background is in theatre, he appreciates it doesn’t reach out to everybody. He was impressed how these clubs could draw a diverse audience, not just middle-aged people who support the arts, but people from all walks of life. He wanted to create something similar.

Granger admits they weren’t completely aware of the situation’s complexities. Being a theatre company concerns you with only shows, not the building housing you. Opening Komedia meant he wouldn’t have time to properly tour again for two decades. The premises they’d bought on Manchester St were beautiful, but derelict and listed. After an intricate and expensive restoration came the long process of forging a reputation. “It took a long time to get known,” he says with a chuckle. “If I took a taxi down there, the driver would never know where it was.” Their space was informal and offered a varied programme for all people. The attitude was to ensure no one felt excluded. If a show was good and legal, it would be staged.

Then 1998 offered them Jubilee Shopping Hall, a former Tesco supermarket turned flea market. This huge building, on a then scruffy Gardner St, had just seen a failed attempt to develop a ‘super-pub’. Granger and his colleagues convinced locals that a mixed-arts venue would help smarten up the area. “We have always had a good relationship with the community association and the business association here. North Laine is such a great area, so it was absolutely perfect for us.” Offering inspiring and adaptive auditoriums, Komedia’s new home made an indelible impact on the city. Over the years it’s staged an extraordinary range of acts, including: Catherine Tate, Stewart Lee, The XX, Kate Nash, Anna Calvi, Harry Hill, Johnny Vegas, Jimmy Carr, Bonobo, Mumford and Sons, Foals and Sia.

Komedia’s defining moment was the launching of its Krater comedy night, hosted by local legend Stephen Grant. “That saved us. We managed to get it to three nights a week, and we can use the money from that to subsidise other stuff and keep our programme interesting.” Still repeatedly selling out, it’s line-ups read like a who’s-who of international comedy talent. Michael McIntyre, Jack Whitehall, Dara O’Briain, Micky Flanagan, Milton Jones, Stephen Merchant, Russell Howard and Alan Carr all gracing the basement during their careers. Added to these successes are a nod from the in industry with an unprecedented 16 Chortle Awards for Best Venue in the South.

The last 25 years have brought exhausting work for Granger, Kobler and Lavender. Much credit is given to their bank, who were understanding from the beginning. The last five years have seen a consolidation of the venue’s future, while still maintaining its simple ethos. “Our mission was based around the word ’welcome’. We wanted to welcome customers and we wanted to welcome performers – because we’d hadn’t been welcomed by a lot of places when we’d been touring – and we wanted to welcome our staff. I believe Komedia does that today. I’m very proud we’ve managed to keep that tradition going.”