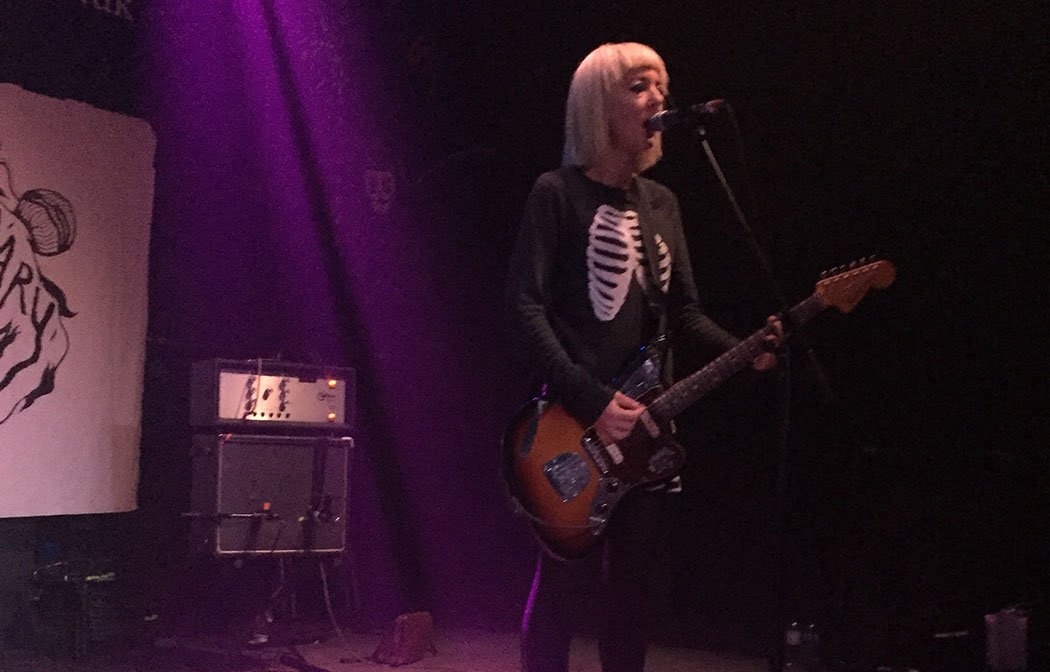 Psych-punk band The Lovely Eggs were back in Brighton on Saturday with a new self-released album This is Eggland. Playing at The Haunt, they had post-punk noise rock band Mush and spoken word comedian Rob Auton in support.

NME has named them: “One of the country’s most beloved underground bands” and it’s easy to see why this fierce duo get such an independent following.

“Good evening Brighton,” guitarist/vocalist Holly Ross bellows, “it’s good to be back, you’re like family to us you lot.”

Opening with I’m with You off their new album, Ross throws herself furiously forward as if about to pitch into the packed room.

Full of stops and starts and surprise flashes, Ross says of their new album: “It kind of sounds like a chip shop on fire.”

If chip shop is the fuel, then Ross’s voice is the lit match lobbed at the heart of it – she’s upfront, irreverent – rallying the crowd.

“Brighton, we love seeing you, you bring such a positive vibe and you always bring it.”

Their new material is heavier than their usual lo-fi sound, not least because it was produced in collaboration with Dave Fridmann, who has worked with the likes of The Flaming Lips and Mercury Rev.

And you can hear this in Hello, I am your Sun.

Ross’s bold vocal salutations become distorted and messed about, she delights in this, rippling her outstretched fingers at the crowd in a kind of greeting.

Wiggy Giggy, the second single off their album, is gloriously poppy. Ross gets some handclaps going, and it’s hard not to smile as David Blackwell sits behind the drums chanting ‘wiggy giggy’ over and over.

Then Ross stops to recount something of political and personal importance.  The council has issued a six-month eviction notice to close the only rehearsal room in Lancaster, the band’s hometown. “When I was 14-15 one of the first things I did was go down and form a punk band with some of the girls. We have one rehearsal room in Lancaster and once it’s gone, it’s gone.”

She wants every person in the room to sign the petition: “Because family help each other don’t they? And it’ll spook the council if we get the numbers up.”

Then they play the uncompromising Would you Fuck and there’s no doubt we’re all in. There’s no encore, there’s nothing nice or crowd-pleasing about this gig. It’s real, and it’s good – as Ross yells out to remind us halfway through: “I tell you fucking now – this is not entertainment.”

Words and image by Karen Goodwin