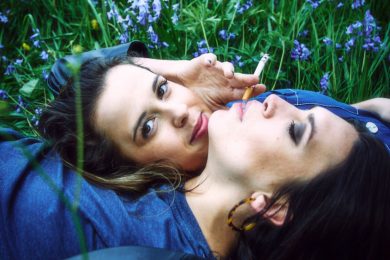 A Long Way Down at Brighton Fringe – review

Proudly lo-fi, the second outing from DOGMA theatre productions is a touching, intimate portrayal of confused identity and the difficulties we face in accepting ourselves for who we are. ‘Intimate’ is really the operative word; set and acted out in a ten-man tent, the audience become as much a part of proceedings as the cast, involved but unable to intervene in a uniquely organic example of storytelling.

Performed with warmth and conviction by Lily Catalifo and Léoni Hughes, A Long Way Down invites the audience to hear the stories of Billie and Eva, two complete strangers who meet at Beachy Head for their last night on Earth. What follows is a compelling account of their experiences, at turns personal and darkly comedic. Billie is from a devoutly Christian family, outwardly bright and friendly but hiding a deeper personal turmoil; she feels herself to be a burden to her friends and family, and is ostracised for her sexuality. Eva, contrastingly, comes from a broken home and has struggled with addiction. She serves as a cynical foil to Billie’s outwardly optimistic cheer. The juxtaposition of these two personalities lends itself to a chemistry that evolves over the duration of the show, as the two gradually open-up to one another.

The dialogue is sincere, and both Cataligo and Hughes draw on real-life experiences in their stories and anecdotes, which are alternately sad and darkly comedic. Some of the most memorable concern an elderly Chihuahua and a freezer, or, at the complete opposite end of the tonal spectrum, a bloodstained carpet. The unpredictable nature of events keeps the audience guessing as to the motivations behind Billie and Eva’s actions, particularly during tangential conversations over card games or the abrupt breaking of the fourth wall when Eva goes for a cigarette.

The strength of the production is all the more remarkable considering the script was only completed three weeks ago. A Long Way Down was directed by Brendan Lucia, who chose the setting of Beachy Head while adapting the story from an earlier version, rejected because that screenwriter didn’t like the idea of two women kissing. Lucia helped to write the play, including an impassioned speech delivered by Billie on the strange call of the void felt at Beachy Head. Of the performance, Lucia said: “We wanted to have the audience present in an observational capacity, but in such a way that they feel powerless to stop the events that are playing out.”

The Girl On The Train at Theatre Royal Brighton – review

Overall, the show’s message is one of solidarity. Many of us struggle to reconcile the way we perceive ourselves with the expectations of the people we care about, closeting our thoughts and feelings through a denial of self. A Long Way Down serves as a gentle reminder that however we choose to cope with our issues, they need not be confronted alone. By taking a compassionate approach to the conventionally delicate topics of addiction and suicide, DOMGA Productions succeed where a bigger company may have stumbled.