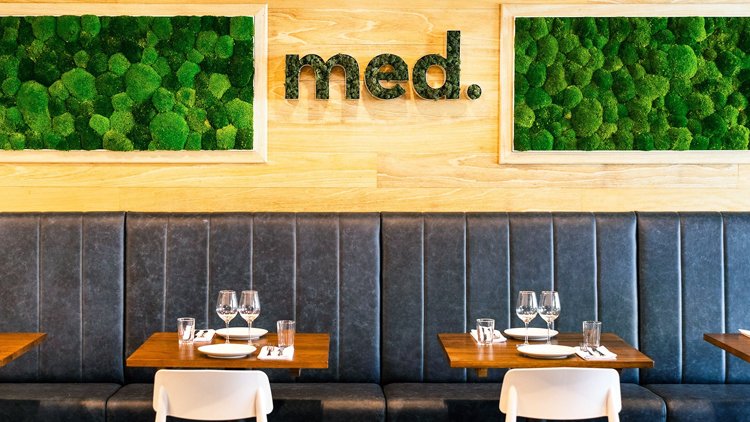 A Match Med. in Heaven

Despite the best efforts of Chancellor Rishi Sunak’s Eat Out to Help Out (EOHO) scheme that has proved so popular, it remains a challenging time for the hospitality industry. Many restaurants are understandably struggling with some even closing their doors permanently, as we continue to do battle with the Covid-19 pandemic.

It was somewhat surprising then, to hear that in the midst of such tribulations for the sector, a new restaurant was opening up. But, delighting their first customers just as the EOHO promotion kicked in, that is precisely what Med. did, helping the regeneration of Little East Street in the process, their premises having laid vacant for the last two years.

Asking the restaurant’s charming and passionate general manager, Momo, about the timing, he explained that the directors signed the lease on the day lockdown was announced. But rather than being put off, they spent lockdown designing and building the restaurant, configuring the layout to allow social distancing, opening just as EOHO began, and they were immediately booked out Monday to Wednesday for the whole month. “In the end, it was possibly the best time ever to open a restaurant,” said Momo.

Med. is a small plates restaurant and, as the name suggests, offers diners a Mediterranean menu (I suppose it could technically have been Medieval, but it seems unlikely that that will be a common misunderstanding). Launched by the experienced and well-established partnership of Will Dennard and Jack Southan (Wolfsmouth, The Paradiso Social), and run by a friendly and knowledgeable team, you know you’re in good hands the moment you walk into the simple and stylishly designed space, and are greeted with a warm and sincere welcome.

My partner and I were there on a Friday evening, and the 30 available covers all seemed to be filled, creating a warm, ebullient atmosphere. Each of us furnished with a refreshing and elegant aperitif (an Aperol-based spritz, and a Sbagliato), as well as delicious homemade focaccia with aioli and a bowl of Sicilian olives, we got down to business and studied the rest of the menu. It was the type of crowd-pleasing menu that, had they been stand alone entrées, I would’ve struggled to narrow down my choice. However, with the luxury of the small-plates, it meant we could choose a number of the dishes and get to try a wider range than we otherwise would have.

As a result, we enjoyed tuna carpaccio which was elevated with the addition of chili and shallots, beautifully cooked charred artichokes and courgettes served with sheep’s cheese and mint, as well as smoked mushrooms and aubergines, flavoured with a wonderful combination of za’tar and pomegranate seeds. We didn’t stop there.

We also enjoyed an Egyptian hummus with crispy chickpeas and more of the focaccia, a delectably delicate treat of cantaloupe melon with avocado and cured cucumbers, with a slight zing in a guacamole garnish, and a feast of clams with vinho verde and chorizo that had me dreaming about snorkelling off the Iberian Peninsula. 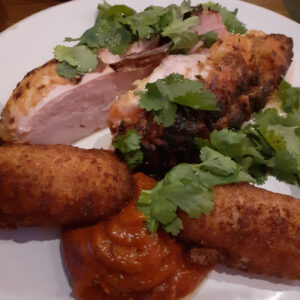 The dish that stole the show for me, however, (and only partly because my other half, G, is a vegetarian so I could relax knowing I was able to eat all of it) was the Portuguese style roast chicken served with chorizo croquettes and coriander. Needless to say, the chicken was cooked to perfection, and the croquettes were as crispy on the outside as they were melty smooth on the inside.

Goodwood Festival of Food and Horseracing 2018

Based on the dishes we’d ordered, our extremely attentive and personable waiter, Alberto, recommended a white Rioja for us, which was the perfect accompaniment for the meal. At least it was. As the evening’s only snafu came when G (who will no doubt be thrilled to read that I’m telling everyone this) decided to top up our wine glasses. With a carafe of the white Rioja and one of water on the table, you can probably see where I’m going with this. Despite there being refreshing strips of cucumber in the water which, in my mind, easily identified the water from the wine, my third-full glass of wine was suddenly two-thirds full, but now with a white-wine-and-water shandy. (I don’t recommend it). Keen to hide the faux pas (until now), we ran the risk of looking like gasping alcoholics instead and guzzled our new concoctions so we could pour some ‘neat’ wine back in, and try and adopt an air of sophistication. Wine-shandy guzzled, but sophistication still nowhere to be seen, we think it went unnoticed – until now, obviously. And with G back from work in about an hour, and likely to read this, I suppose I’ve got perhaps two hours until I’m single.

In the end, our eyes were marginally bigger than our bellies, and not only could we not squeeze in dessert (which was a crying shame, as the honey and lavender ice cream and chocolate and coffee tart with hazelnuts both looked exquisite), but we were unable to quite finish the banquet. Hating to see food go to waste though, and never too proud to ask for a doggy bag, the final morsels of our feast were kindly (and securely) packaged up for us to take home, which I was looking forward to having for lunch the next day. But by the time we got home, my belly (already going through a bit of a lockdown-initiated growth spurt as it was), had caught up and overtaken the size of my eyes, and I accidentally wolfed the rest down when I was supposed to be putting it in the fridge.

And even standing in my underpants in front of an open fridge, listening to two passing drunks outside argue about whether Africa was a country or a continent, there was no getting away from the fact that the food was absolutely heavenly. Unlike the image you may now have in your head. My apologies.

Med. is located at 2/3 Little East Street, Brighton.
For more information and to check out their menus, please visit their website.