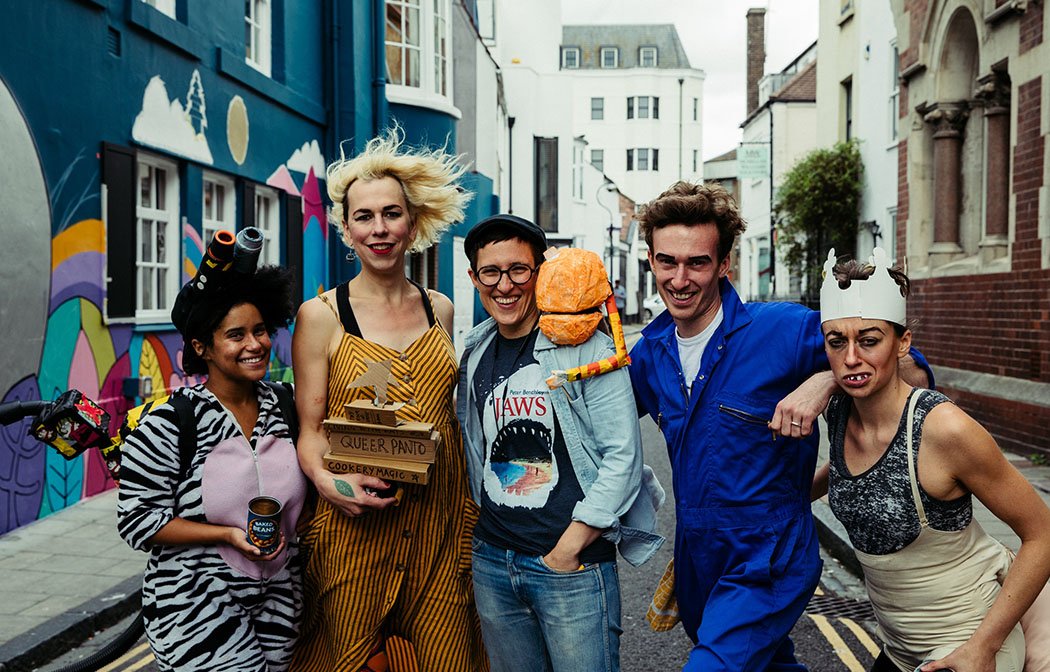 The pantomime is a staple of British festive entertainment. Unfortunately, during the last 50 years, it’s become increasingly stale and irrelevant. Matters haven’t always been like this. There was once subversion amongst the slapstick. Panto evolved as circumvention of the legislation which forbade onstage dialogue in most theatres. Somehow this eventually evolved into a parade of crassness, lashed together with a perfunctory narrative and masquerading as family fun. “I was thinking how backwards a lot of the politics were in some of these mainstream pantos,” writer/director Hester Chillingworth tells me. “It’s really just unthinking, they’re like: ‘Yeah. We’ll just trot the same thing out every year’. I wanted to create an alternative offer for kids who love panto.” Like most British children, pantomime offered Chillingworth’s first experience of a big theatre production – and its subconscious messages about how the world should be ‘straight’ and heteronormative.

While most theatre becomes more aware of the audience, many mainstream pantos still churn out the same tired memes. Their cross-dressing characters reinforce gender stereotyping rather than highlighting fluidity, the Dame portrayed as a screeching,

un-loveable harridan. If a young male celebrity is unavailable, the Principal Boy is generally played by a young woman. Devoid of masculinity (and often trousers) she titillates instead of challenges. Meanwhile, the Principal Girl remains resolutely feminine, wide-eyed and vulnerable. “There’s a lot of homophobic, racist and transphobic gags. People will say: ‘Oh, it’s just tradition.’ But we’re having more enlightened conversations nowadays. We know to do better than that.” As a response to this, Chillingworth is writing and directing the forward-thinking A Pair Of Pantos.  It’s more mindful of the signals it sends, laying out a different set of narratives to deliver a universal validating experience. It proves you can have humour without cruelty or ignorance.

Taking the familiar stories of Dick Whittington and Jack And The Beanstalk, Chillingworth  has smashed them together to create a new show about morality, discovery and identity. “You might not even realise what messages you’re absorbing, I just wanted give it a bit of a closer look.” Themes of aspiration and social climbing from the source material have discarded, leaving characters stranded in an imaginary place which might not yet have room for them.

Its protagonist, Jack, has a fantastic idea for making money but things go wrong when the sneaky and contradictory King Rat gets involved.  But nobody knows which pantomime they’re supposed to be in, and Jack is still deciding what underwear is suitable when you’re non-binary.

For the first 150 years of its history, pantomime dramatised and dissected contemptuous political and social issues. Against a backdrop of sweeping change, Victorian audiences swarmed to riotous Christmas shows which offered an exhilarating alternative to the staid mainstream. These highlighted Britain’s issues with colonialism, poverty, worker’s rights and crime. In recent decades large-scale panto has abandoned societal nuances, becoming dumbed-down and spiteful. A Pair Of Pantos succeeds in reversing this trend, creating a relevant fantasy world which doesn’t languish in Disneyesque histrionics and lays out higher ambitions. “It’s probably a more human thing. I’m hoping that children who come to see will feel that it’s ‘right there’ and they can connect to it.”

A Pair Of Pantos comes to Brighton’s Marlborough Theatre on Tues 18 – Thurs 20 Dec, as part of a national tour.