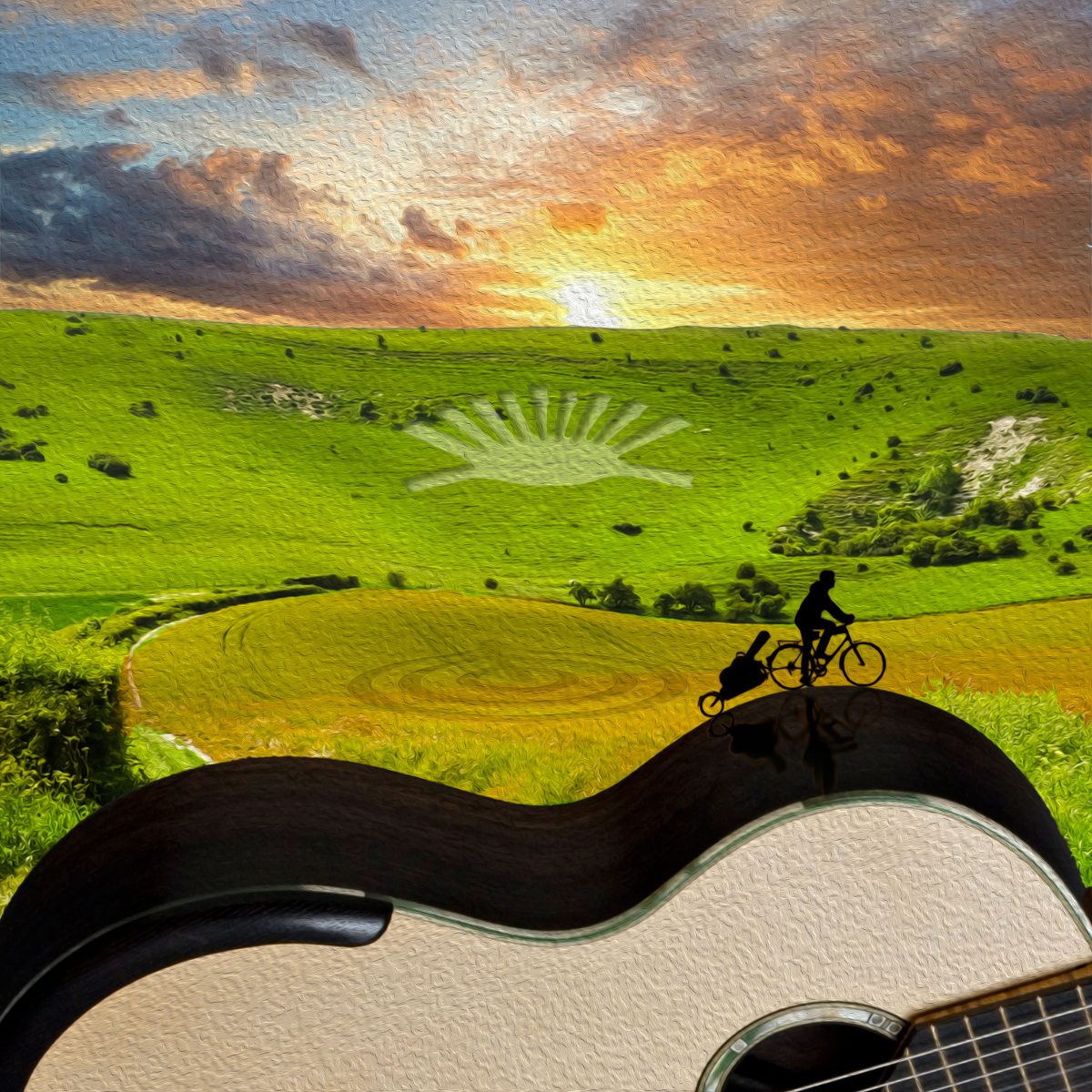 Acclaimed folk guitarist and composer talks to us about his Bog-wood guitar and the South Downs.

You might have seen Richard Durrant cycling across the South Downs, lugging his 5000-year-old bog wood guitar with him on the back of his bicycle.

For the past few decades, Richard has experimented with folk and classical guitar compositions, playing in the UK as well as across South America on a guitar made from a 5000-year-old oak tree, pulled out of a bog.

Richard happily explains to me over Zoom from his studio in Shoreham that the UK used to be completely covered in dense forests of oak. When these huge oaks fell, they landed in boggy waters, escaping their destined natural degradation through the absence of any oxygen. Protected from air, they were preserved for thousands of years to then be pulled out by frustrated farmers in the 21st century.

One such Fenland black oak tree, which was preserved in the forest floor for 5000 years, was saved by carpenter Hamish Low and transformed into a guitar by the luthier Gary Southwell. This is the one Richard plays today.

Growing up on a Hollingbury council estate just north of Brighton, along with his six siblings, connected him to Sussex’s rich history and folklore. His bedroom window looked out on the Saxon Barrows all the way to Chanctonbury Ring and the top of Devils Dyke. Richard says, “I’ve always looked back as much as I look forward. When I was a kid, I dreamed about being a composer, but I also fantasised about playing music in the 13th Century. I had this curious desire to look inside the ancient barrows up on the downs and soon realised that, whilst playing my guitar, I could.”

The connection to Sussex and its history have always been a main source of inspiration for him. He tells me, slightly embarrassed, that he decided to commute his third year at the Royal College of Music because he missed the sea so much. Growing up within neolithic relics instilled in him a steadfast sense of curiosity and strong relationship with the area.

His route to primary school was through the Twittens, a neolithic narrow passageway only found in Sussex linking two places together. Richard remembers as a child imagining the people that may have travelled down these paths before the houses were built, thinking about what they were doing and where they were going. He grins and explains, “I’ve always had that sense because of my kind of strange, whimsical weirdness when I was a kid.”

Richard’s music threads themes of history, folklore and politics together by weaving classical and folk. The Sleep of a King features intros of Bach which seamlessly descend into more traditional folk guitar, which Durrant says is possible because of the foundations of traditional folk underlying Bach’s compositions.

Richard tells me, “I’ve always felt that even though I’m classically trained, and I went to the Royal College of Music, our folk heritage is at the very, very heart of what I am as a musician.”

Folk and Classical music differ not only in form, but also in use. Folk has been a fitting mouthpiece for protest and resistance for hundreds of years, with songs passed down orally and collected by famous British collectors such as Cecil Sharp. The legacy of folk has carried workers’ rights, anti-war movements and political resistance since the great depression right through to the labour strikes under Thatcher. It has always predominantly been a working-class genre and firmly anti-establishment, expressing grief, worries, longing and societal changes through the accessible and understandable means of storytelling.

Richard’s music weaves themes of social injustice with a connection to the land. “Music can be a vehicle for delivering a message. Writing about something makes you feel better because you’re doing something which either has a kind of beauty about it or delivers some kind of emotion that you were feeling.”

He pensively explains that you can make something tremendously positive out of even the most desperate situation. Something he tried to do with his album ‘Stringhenge’, which drew on the political instability of 2018 and divisive nature of the West after the Brexit and Trump vote. Not unanimous to politics, but also to expression of feelings; Richard draws on the solidarity created by making music about shared experiences.

Playing on his guitar, which has been around for five thousand years longer than the rest of us gave him a perspective which he found quite comforting. “So, I wrote Stringhenge, and it was the most English thing I could do.”

We Plough and Scatter, from his album Stringhenge, is an ironic take on an old folk song, blending his obvious anger to create a simplistic ballad with unmistakable force:

We break our bonds and scatter
Our hard work to the winds
So much for peace and friendship
We sling them in the bin
Here’s to our children’s future
The beauty that we made
As we climb aboard this ship of fools
And watch our fortunes fade.

Folk songs collected over the years acted as an angry mouthpiece for pressing issues at the time. Some have remained unique, almost nerdy relics to older times, whilst others have become national anthems covered endlessly. Such as The Working Man by Rita MacNeill, which when covered by Kathy Durkin became a sentimental Irish chart-topper for many years. Similarly, Woody Guthrie’s This Land Is Your Land and Bob Dylan’s Hurricane, which have remained firmly planted in the cult folk repertoire, as odes to the societal rifts of the great depression and police racism in America.

Others have continued to be sung by children over generations like 18th century Scottish folk song My Bonnie Lies Over The Ocean and Hares On The Mountain, whose many versions were collected by Cecil Sharp and popularised in his Songs Of Somerset. Older songs like the traveller’s song What Will I Do When I Have No Money or Parting Glass are relics of the culture of folk singing around drinking or worries.

The differences between original folk songs and those of the folk revival is a romanticisation of nature. Anti-industrialisation is at the core of the folk revival, encouraged by song collectors like Cecil Sharp and Alan Lomax, who chose songs which fitted into the rural, idyllic idea of ‘olde’ England and America.

For most people, life was already interwoven with nature through a subsistence economy. Those with cattle, poultry or horses were considered wealthy. For the working class, the connection with the natural world was perhaps less picturesque.

The erosion of the natural world and promotion of a traditional lifestyle became core to the new folk movement because society had changed from Industrialisation. People were no longer as involved with the natural world and were instead living in cities. Visiting parks and the countryside became a leisure activity for the upper class, as did singing about nightingales and rivers.

The relationship between nature and folk has existed since the dawn of industrialisation, which folk collectors strove to resist. This changed when miners’, steelworkers’ and millworkers’ songs were collected in the 1960s by prominent socialists like Bert Lloyd.

Many contemporary folk musicians, like Durrant, Robert Macfarlane and Lankum, are utilising the genre to talk about the natural world in an age of climate breakdown and loss of natural habitats. As climate change becomes a more spoken about and a consequently more pressing issue, its language has found its way into folk song.

Richard’s music, from his unwavering location in the South Downs, has employed natural metaphor and folklore in his music uniquely within the last three albums.

Many a musician, writer and painter has been inspired by the Downs and the extensive history surrounding it. Frank Bridge, the twentieth-century composer, was born in Brighton in 1879. His song Enter Spring listens as a musical response to walking along the coastal path to the Seven Sisters. Many folk song collectors congregated in The Sussex Weald, which was at the foot of the Downs and a centre point for nineteenth-century folk-song collectors. Some collectors, like Authur Beckett even refrained from recording some because of their ‘decidedly licentious and unwholesome character’.

His guitar style is also reflective of his different influences and how they make their way into his compositions. Just by changing the shape of his hands he can dip into that folk heritage, with its roots from all around the world.

He says: “English folk Baroque style gives my hands a kind of link with our folk heritage. Just by changing the shape of my hands I can evoke different sounds. You can twist your hands and it will sound like you’re in the South of Spain or play another way and you sound a little bit like Martin Carthy.”

This connection to the environment is apparent in all parts of him, from how he travels on his tours to what wood his guitar is made from and how he records his sound. The recent album The Sleep of a King was recorded at St Botolph’s Church on the banks of the river Ade, a beautiful old Saxon church.

“There’s always the thought at the back of your mind that your sound is going to come out of two wooden boxes. So, although it’s beautifully recorded, it’s a compromise. The thought of immersive audio for me as a soloist is completely liberating. People are going to hear my guitar in the air space of the environment.”

Richard started cycling his tours because of the environmental impact and to hedonistically glimpse the beauty of the British Isles. He says he just wanted to see how beautiful the landscape was and to remind himself of the British Isles’ beauty “even though the politics are filthy. And have got even filthier, actually, since then”. Although he says some people tell him he shouldn’t mix politics and art, he says, “you know, for Christ’s sake, we have to, it has to be done”. He grins and concedes that it’s nice to do it in a subtle way.

Durrant’s new album The Sleep of a King will be available on Spotify, and all other streaming platforms, from nine minutes past four on the morning of the second of June, the time of sunrise on Orkney, which is where the Music for Midsummer tour starts.