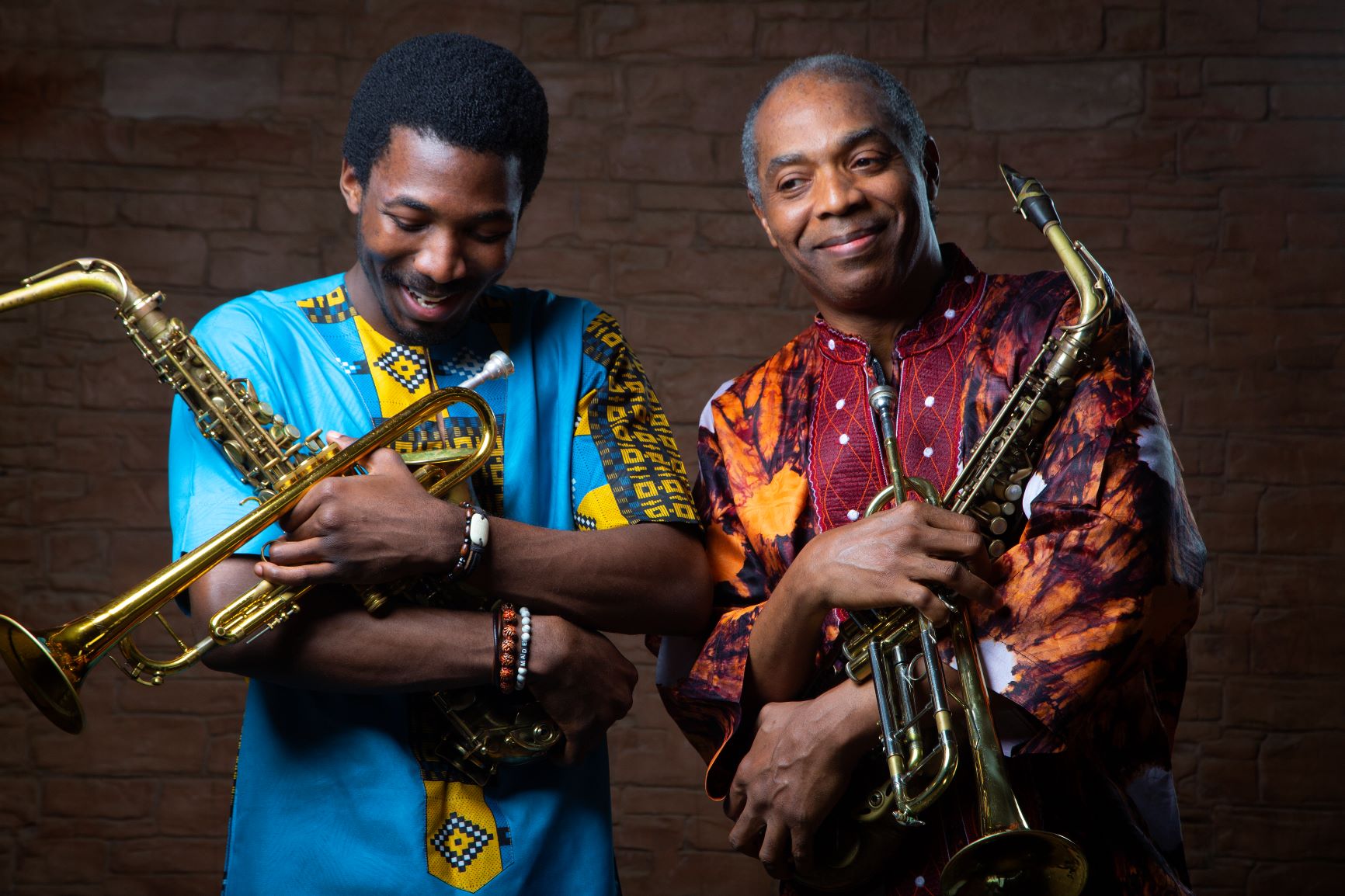 In the seventies, Fela Kuti rose to international stardom as the pioneer of afrobeat, a new politically-charged genre of music which brought together the Ghanian highlife popular in his home country of Nigeria and the James Brownian funk and Blue Note jazz he encountered on his travels in Europe and America. As afrobeat grew in popularity and his anti-establishment messages reached wider audiences across the world, Fela’s home in the Nigerian capital of Lagos became the target of violent police raids. Despite the fear he faced throughout his life, his fervour for positive change remained undiminished and the power of his brand of protest music has rarely been equalled.

Fela died in 1997, but afrobeat remains a strong presence in today’s musical landscape. From the drawn-out polyrhythmic instrumentals of Talking Heads to the horn lines of modern indie, from dancehall to pop, there’s a certain type of blissed-out funkiness that can unmistakably be traced back to Fela’s innovations.

The most direct link can be found in the offspring of the man himself. Fela’s eldest son Femi played alto sax in his father’s band, Africa 70, when he was 16 and he went on to form his own group, Positive Force, in the late eighties, forging a more upbeat variant of afrobeat that became especially popular in Europe. His career has encompassed Grammy nominations and diverse collaborations with artists such as Mos Def, D’Angelo, Nile Rodgers and Nigerian popstar, Wizkid, as well as sharing a stage with his brother Seun.

Femi’s most recent collaboration is with his son Made (pronounced ‘mah-day’). They have just released a joint double album, Legacy +, which brings together two albums they recorded separately. The pandemic has scuppered what would have been a busy time of touring and publicity for them, but I spoke to them over Zoom from their respective homes in Lagos.

Made told me why they decided on this format for their first joint release.

“We were supposed to release two separate albums in 2020 and as I was writing my side and my dad had finished recording his. My dad thought it would be a great idea to release a joint album, and he thought it had never been done. I loved the idea and Partisan [their record label] loved the idea, everyone loved the idea… We wanted to show how passionate we are about the message of the music, how much we share musically, and how, as much as we are very close together, we accept that we are two separate individuals.”

First in the running order is Femi’s contribution, Stop The Hate. Right from the opening track and lead single, Pà Pá Pà, the unmistakable spirit of classical afrobeat is present: the locomotion of the tight funk grooves, the call and response between Femi and the chorus singers, all accentuated by brass lines that shift back and forth between lyrical and punchy. The atmosphere is intimate and impassioned, at once a condemnation of corruption and a celebration of togetherness.

Made’s album, For(e)ward, takes a more cerebral approach and encompasses a wider range of influences. He plays every instrument on the album, including sax, trumpet, drums, bass, guitar and keyboards. It’s an impressive feat, with the tracks often building into climaxes of stuttering drum rhythms and lush brass counterpoint. His approach draws on his education at London’s Trinity College, where he studied composition, following in the footsteps of his grandfather, Fela, who also studied there in the late fifties. Made tells me he took inspiration from the hotbed of London’s current jazz scene, collaborating with the drummers Moses Boyd and Sam Jones, but afrobeat was always there in the background.

“Afrobeat grounded me a lot. It created all the fundamental things I use for the album. The foundational elements were all afrobeat elements: the groove, the instrumental interplay I wanted to use, the horn lines… I used a lot of specific jazz harmonies I learnt at Trinity, and I used a lot of time signatures that I was experimenting with. My dad did two 5/4 tracks which pushed me to try other time signatures other than common time.”

The albums demonstrate the family ability of combining political resistance with an infectious call to dance. It’s a great shame that there will be a long wait before any live dates can go ahead and they can get people dancing in person. The pandemic has meant that everything had to be pushed back.

“The album was supposed to come out on my father’s birthday on the 15th October last year,” Femi explains, “but the pandemic stopped that, so we had to shift it to the 5th of February to give us enough time, because everywhere was closed. We couldn’t have the Felabration, the big festival we have in honour of my father, so that derailed us with the release.”

The plan to release these albums on Fela’s birthday is one example of Femi and Made’s conscious attempt to celebrate and continue their family legacy. It’s worth remembering that this legacy goes back beyond Fela. His father was an influential educationalist, and his mother, Funmilayo Ransome-Kuti, was a prominent women’s rights activist in the 1940s, demanding better representation of women in the Nigerian government and taking part in the Nigerian independence movement. She lived alongside Fela in his compound, the Kalakuta Republic, and was a victim of the police raids, one of which tragically led to her death. Her fierce advocacy for structural change set the precedent for her son’s resistance in the seventies.

Recent events in Nigeria have brought the Kuti family back into the political spotlight. In October 2020, mass demonstrations took place in Lagos and other cities across Nigeria, protesting police brutality perpetrated by the Special Anti-Robbery Squad (SARS). These uprisings resulted in countless deaths as the police opened fire on ENDSARS protesters across the country. At one stage, the violence reached the threshold of the New Afrika Shrine, the nightclub opened by Femi as a replacement for Fela’s original Afrika Shrine, which was burnt down by police in 1977.

“We were involved in the protests because they came right in front of our doorstep,” Femi tells me, “and the police were shooting, so we went out to stop the police shooting. It had turned to anarchy. We managed to solve that situation. It happened by the Shrine… We arranged for more people to turn up to the protests there. We don’t know the organisers but we do support ENDSARS because everybody knows the police brutality had gotten out of hand.”

The Kuti name clearly still holds great power in Nigeria and Fela’s offspring still have the potential to make a difference in the political landscape, but Femi is pragmatic. “The Kuti name is huge but I don’t think people who are killing are going to ask your name first. Hopefully, it doesn’t get to that stage. Hopefully, people will understand, especially people in the political arena, or people instigating and encouraging this [violence]. Hopefully, they will quickly gain wisdom and desist, and try to look for amicable understanding and peace for all the issues.”

Femi’s younger brother Seun has recently said he plans to revive Fela’s political party, the MOP (Movement of the People) to unite the young people of Nigeria and give them a voice. Would Femi and Made consider getting involved in politics? “No politics for me,” Femi states firmly, “I’m just a musician. I sing about things I’m passionate about. Fela never became president but Fela is a historical fact of Nigeria… He is a reference today. My music is a reference today. Made’s music is starting to be a reference.”

In the context of the violence and unrest in Nigeria, the tracks of Femi and Made’s albums take on a stark intensity. An anti-government sentiment permeates the lyrics. Femi’s tracks face the issues head on and demand action. Na Bigmanism Spoil Government calls out the ulterior motives of career politicians; Show of Shame describes how millions of naira end up in the pockets of the corrupt rulers; whilst songs like Young Boy/Young Girl and Set Your Minds and Souls Free are rallying cries to the people to rise up and make a change.

Made’s album acts as a response to Femi’s call to action. The urgent incantations of Fore(e)ward’s opener Free Your Mind usher in a circumspect, questioning approach to the fight against the inequality faced by the Nigerian people. The question of ‘why?’ threads through the sparse textures of the songs. It’s a more introspective counterpart to Femi’s album, but is just as brave in its opposition. In an impassioned spoken word section on Different Streets, Made acknowledges that there is still a long way to go: “We must now understand just how scary it is that we are facing the same problems from the seventies, and think for ourselves how hard we must work collectively to be free.”

The reality of life in Nigeria really hits home when I ask Made if he would consider moving back to London. “I don’t want to say never because I don’t know how unsafe the situation in Nigeria will get,” he tells me. “If leaving with my family is the only thing I can do to protect them, I will have no choice, but until it gets to that stage, I want to participate in the struggle by whatever means I can.”

This struggle is at the heart of afrobeat. It’s more than just a genre of music and it’s more than the story of Fela Kuti. Femi sums it up by explaining why they called the album Legacy +: “The plus is all of us. The plus is me, the plus is Made, Made’s children. The legacy is the legacy of the family, the music, the political, social side of the family. Seven generations of our family have been playing music, have been political. So, the plus is infinity. It will go on forever hopefully.”