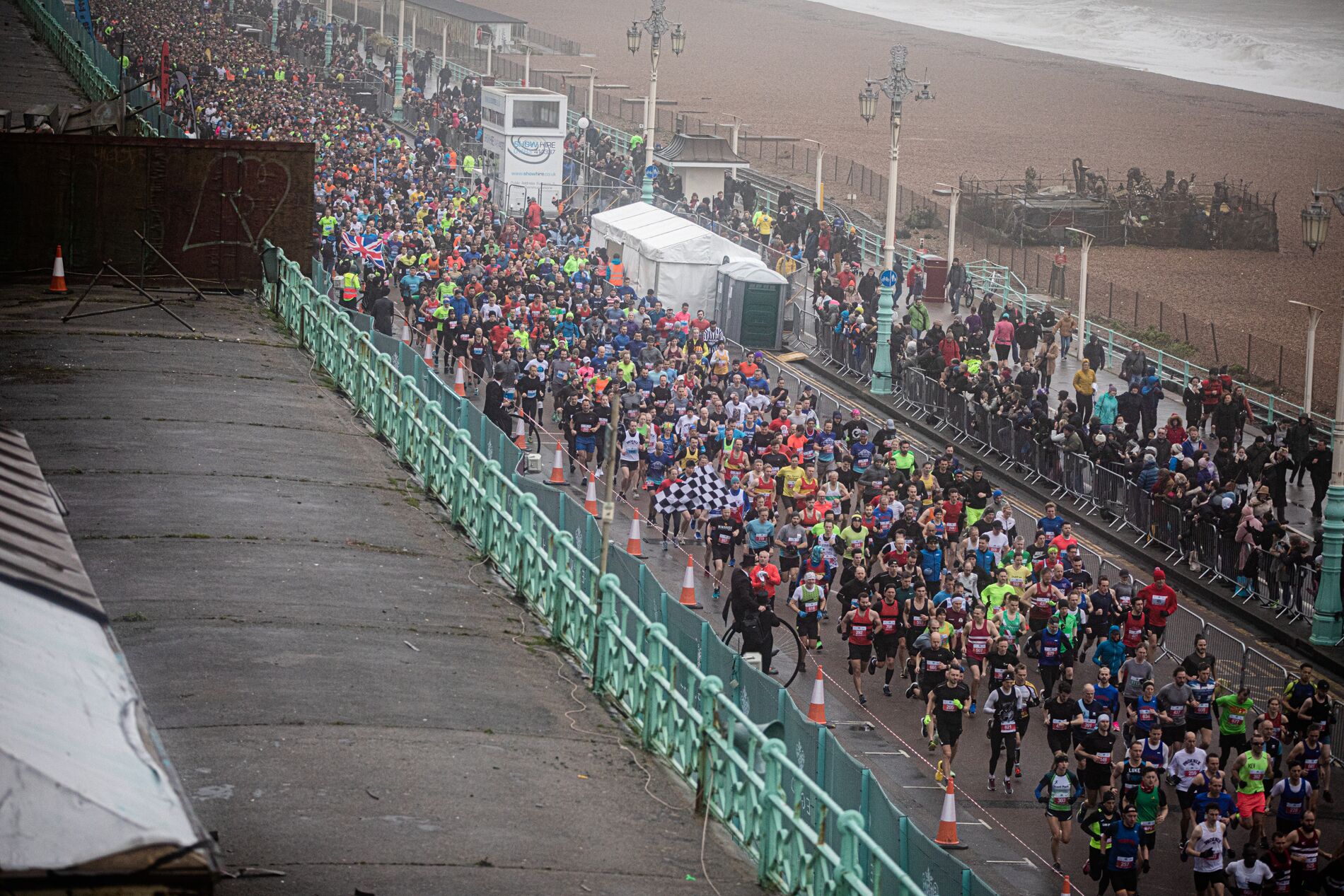 And they're off!
Simon Lightfoot·2 min read

The wind tried, the rain tried, even the Coronavirus gave it its best shot – but nothing could stop the nearly 8,000 entrants in The Grand Brighton Half Marathon! Elite and novice runners alike, were joined in their stubborn show of defiance against Mother Nature by thousands of almost-as-brave spectators, cheering them all the way to the finish line. Despite all the odds, race organisers, The Sussex Beacon, once again put on a magnificent sporting extravaganza.

The klaxon was sounded by the winner of the original race in 1990, David Knight, and runners were encouraged out of the blocks by DJ demigod Norman Cook. And so began a 13.1 mile quest for glory: don’t forget the point one – it sounds trifling, but try telling that to people after they’ve already got 13 miles in their legs!

The spectacular route (even in the pouring rain), took runners past the stunning seafront cliff tops of east Brighton, the Royal Pavilion, The Grand Brighton hotel, the i360, the colourful beach huts of Hove seafront and the iconic Brighton Palace Pier. Runners and spectators were also entertained by The Sundaes and Alex Banks, who performed live at race’s main sponsor The Grand Brighton, as well as a cavalcade of penny farthings, somehow steered safely in the unrelenting wind by their part-skilled, part-mad riders.

The Sussex Beacon Wheelchair race was won by Gary Cooper in an amazing time of 80 minutes and 49 seconds. Rob Smith finished second in 92 minutes and 25 seconds, and less than five minutes later local favourite Ellie Page crossed the line to take the women’s title in 96 minutes and 39 seconds.

The women’s race was won by Phillipa Williams in a phenomenal time of 77 minutes and 55 seconds. Second place was taken by Heather Noone in just under 80 minutes, and third by Maisie Trafford, in just over 80.

The men’s race saw Brighton resident Kevin Moore take first place with an incredible time of 69minutes and 5 seconds. Neil Boniface and Paul Martelletti came in second and third respectively, and after more than 13 miles, the three of them could only be separated by a mere 35 seconds.

It’s amazing (and pretty bloody annoying, if I’m honest!) to think these athletes can complete a half marathon in little more time than it takes me to choose and eat a sandwich.

Alongside the elite runners, thousands of mere mortals took to the streets to raise over a million pounds for dozens of causes including local charities Chestnut Tree House and the Rockinghorse Children’s Charity, as well as national organisations such as Macmillan Cancer Support and the Alzheimer’s Society.

Also well represented, both with runners and supporters, were the remarkable team and race organisers at The Sussex Beacon. This incredible Brighton-based charity provides a range of services for men, women and families living with or affect by HIV across Sussex.

After months of training and a final push of an average of 29,575 gruelling paces on the day, runners crossed the finished line to the hero’s welcome they deserved, before heading to the race village to receive medals, foil blankets and hearty congratulations.

Hopefully all you runners are now enjoying a well-deserved rest – unless this half marathon was part of your training for a full marathon this Spring. In which case get back out there, lazybones!

Huge congratulations to each and every one of you from all here at BN1 Magazine!