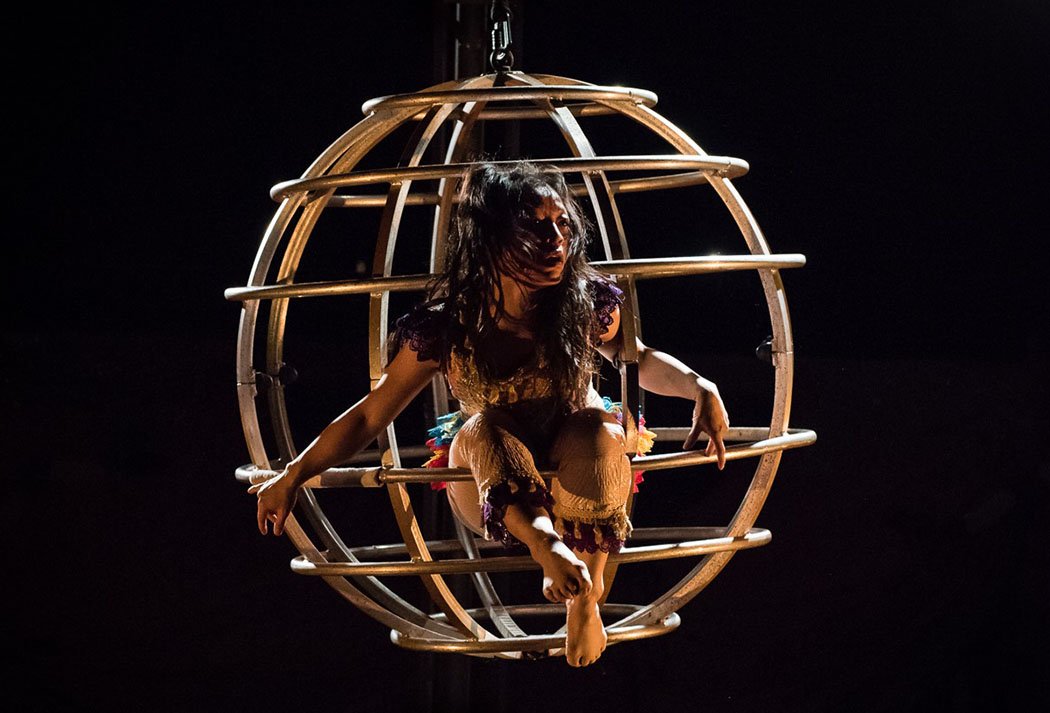 This work is inspired by the lives and destiny of its performers Renu and Aman experiences as child circus slaves in India. It also highlights the story of other Nepalese children being trafficked into slavery in Indian traditional circus. From 2002, when this was discovered, over 700 children have been discovered and rescued or released. 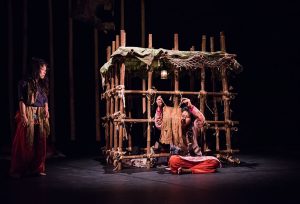 In 2013 producer Ali Williams spent a year working as the Creative Director of Circus Kathmandu. Circus Kathmandu was a group of 13 young men and women who all were rescued from Indian circuses, including our performers, Renu and Aman.

Ali Williams invited director Sverre Waage to come to Kathmandu to meet the newly formed circus company. That was the start of a collaboration between Ali and Sverre, with the aim to build bridges between the developing circus environment in Kathmandu and the International community of performing art producers and programmers in UK, Norway and Europe.

The first achievement is the production and touring of As a Tiger in The Jungle, representing the international partnership of prize-winning director and play-writer Sverre Waage (Norway) and Ali Williams (Wales), co-founder and former artistic director of NofitState.

Ali and Sverre have been working with two Nepalese circus artists, Renu and Aman, over the last three years and for this project have integrated Loan TP Hoang a Vietnamese refugee with her own story of a lost childhood.  As a Tiger in The Jungle is a unique fusion of Asian and European performance, circus and music. Original music score composed by Per Zanussi.

BN1 was able to talk to the producers of this incredible show, to find out more about their art

How would you describe the work you’re bringing to Brighton Fringe?

This is a piece of meaningful circus theatre. Using the skills our young performers learnt in slavery in Indian circus our young performers use theatre and circus to tell a deeply moving story about their own lost childhoods. This is an important piece of diverse theatre where the audience hear and understand the story of our performers and see how they have overcome the abuse and problems of their childhoods and become beautiful and inspiring young professional artists. It is authentic because the stories are their own and explores human trafficking -one of the big issues of our time in an fun and emotional performance.

What have audiences taken away from the show?

As A Tiger in the Jungle is a brave, sad, and beautifully staged production that shines with an inner fire.

As a Tiger in the Jungle is likely to have an unforgettable life-long profound effect on you.

I was there. It is an intense piece of theatre-circus – moving and emotional. Exceptional aerial skills – particularly the duo aerial hoop routine and the solo strap routine. There was a standing ovation and well deserved for this trio of Nepal-based artists, telling their often harrowing story. If you want to see what “circus-with-meaning” and theatrical emotion feels like then grab a ticket

There are certain performances that resonate and some that need time to process – As A Tiger in The Jungle does both. It’s a beautiful piece… so clear and honest from the outset. I think it’s the most moving circus performance I’ve ever seen and certainly the most important. The narrative is instantly engaging and the performers carry such weight and lightness, grace and dignity.

It is sometimes impossible to summarise or find the right words after a show and I think this one will stay with me for a while. Thank you for bringing this work to us – for allowing those stories to be told, and for not making us feel guilty or responsible. I feel privileged and enlightened by the work and by the style and inspired by the discipline and power of the performers.

I sometimes watch work and wonder if the people performing know why they are moving the way they are. I felt certain that this ensemble knew exactly what they were doing and where that came from. 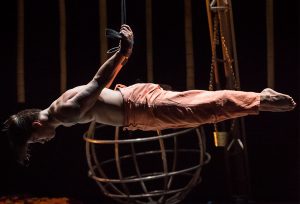 How have you evolved as a creative?

Ali Williams was formally Founder and co-Artistic Director of Nofitstate Circus and creator of Barricade, Parklife and Block (all of which have played in Brighton main Festival and co-creator of ImMortal and Taboo (award-winning shows that have played the Fringe) I left to become a freelancer producer of my own projects in 2016 and this is one of the new partnerships that have evolved.

Their partnership began in 2013 when Sverre visited Ali on Sabbatical in Kathmandu when she was creative director of Circus Kathmandu an organisation set up to retrain young people who were returning from a life of slavery in Indian circus.

What do you think makes Brighton Fringe special?

The Fringe gives life to the city beyond the high powered Arts festival and gives and opportunity for everyone and anyone to participate through making their own performances & attending others. The broad spectrum of shows on offer means there is art for everyone and with some free events as well it makes for a truly accessible festival

What’s your background? How did you get into art creation?

It’s been my life… 30 years with Nofitstate, the UK’s leading circus company and regular attenders of Brighton Fest and Fringe. A company that tours internationally and has performed in Europe, Asia, North America, and Australia

What can art offer modern society?

Artists are in a position to engage with a wider audience than their own circle which gives an opportunity to influence people. Academia says to make art you need to have Content, Form and context but I believe it also needs purpose.

While there is a place for circus or other entertainment whether it’s categorised as trad or new, for me it’s not what I want to watch. Arts should not always be pleasing. Art should be made to show us where the cracks are in our societies. It should be there to provoke us and disturb us and change us. Right now, there are so many catastrophic local and global issues – everything seems doomed to get worse of we carry on in the same tracks for example global people displacement and the refugee crisis will only get worse with worsening global warming.

This is not new a new thought -for thirty years I have been trying (not always successfully and not always without facing barriers sometimes even within my own organisation) to use circus as a political tool. As members of any society we (the common people) are manipulated by our governments and have become a society groomed to live in fear. In my youth I was using circus to fight apartheid, Support the miner’s strikes and to campaign for gay rights and equal rights for women. Being a contemporary circus outfit was a political act – a statement against traditional use of animals and circus entertainment. The very act of travelling around doing a show was political when thatcher was trying to destroy the travelling culture. The content of the shows was political as was the way in which they were made. New circus (as it was called back then) was formed as a reaction to what went on before.

Now we are living in a time of right wing extremism, racism and intolerance. Politicians understand that creating an environment of fear and surveillance is an effective way of controlling us in a world where traditional societies are changing, and traditional boundaries or borders are also becoming blurred. The disaster that is Brexit is a reaction to this change.

As a Tiger in the Jungle comes to Brighton Open Air Theatre on Weds 22 – Sat 25 May, as part of Brighton Fringe 2019