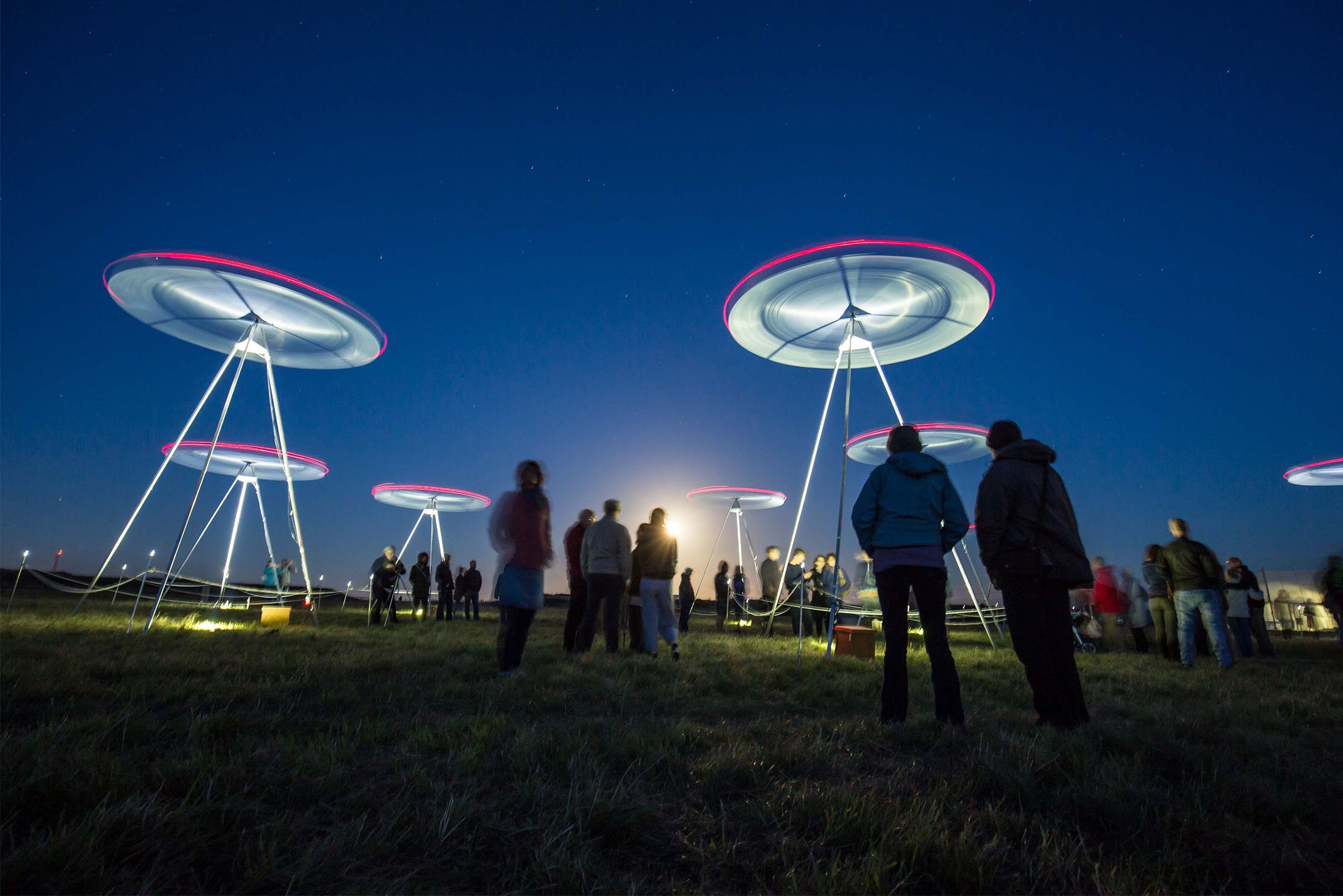 Ray is best-known for his immersive and mesmerising installations such as the worldwide hit Siren, Echometric Museum, and his monumental outdoor works Chorus and Ring Out.

Ray tells us about the inspiration behind the work and his fascination with the invisible forces that surround us.

What is Points of Departure?

Points of Departure is a night-time event taking place at Shoreham Port. The audience will be guided through a series of large-scale kinetic sound sculptures and installations, in amongst the atmospheric buildings of the port.

Where did the idea come from to create the huge sculptures?

We’re familiar with sound coming out of loudspeakers and there are fancy systems that will move the sound between loudspeaker systems to give the impression of movement. But I’m fascinated with what happens when you physically take a loudspeaker and make it spin: what happens to the sound? You get a little bit of the Doppler effect and the sound is kind of warmed up by this process. A lot of the work has spinning arms with loudspeakers on each end and as you walk around, the sound is being moved past you. It creates quite a mesmerising effect.

What is it that draws you to creating this kind of work?

I don’t make works for static audiences, so I am interested in allowing the audience to move. For me that’s really important, because it enables the audience to find their own route, find their own journey. Rather than being placed in a fixed seat where you receive whatever it is you receive, you can find your own place. You can find the place which looks or sounds interesting, and if you get bored there you can move on and find somewhere else. It creates a kind of large-scale sonic and visual environment which the audience can explore.

I don’t really specify a particular meaning for the work. What I’m looking for is to open up a space for imagination, a space for wonderment. There is something about this moving sound world that allows people to imagine whatever it is they want to imagine: it frees them from a fixed meaning of the work.

What has it been like working on a project for an industrial site like the port? Has it had an impact on the work?

Oh, very much. I’ve spent a lot of my life living in Nottingham and quite a few of my early works were heavily influenced by the ex-industrial nature of the landscape and the buildings. I’ve made works for a disused coal mine, a disused electricity generating station, places like that. Some of the form of my work comes out of an interest in industrial architecture. One of the pieces in Points of Departure is Ring Out and could be described as a post-industrial carillon (a set of bells played using a keyboard), something between industrial and science fiction. 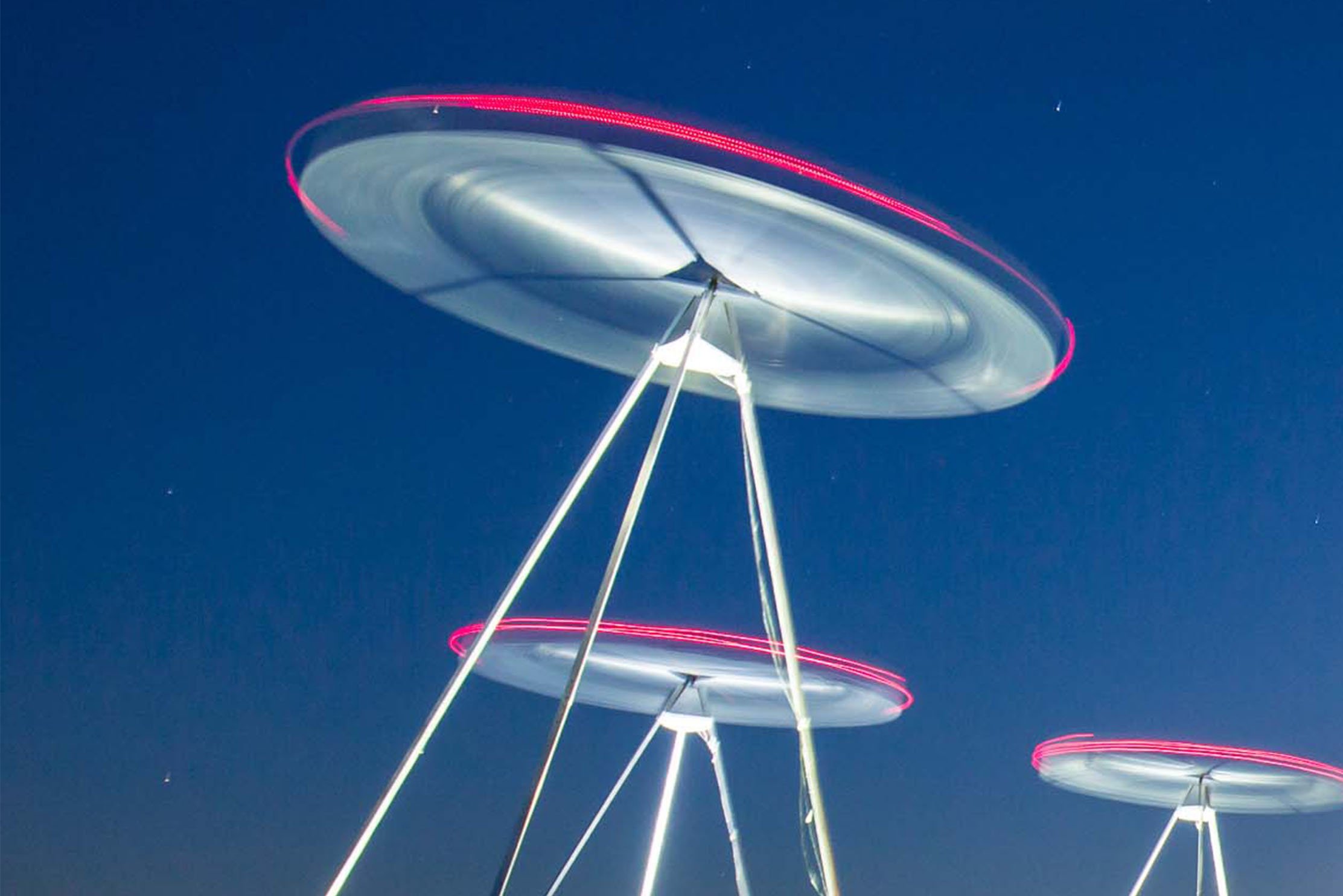 How can local people take part in the show?

The Ring Out element involves the giant towers with suspended cones: each tower has an operator who pulls a lever to make the cone swing backwards and forwards. It’s a little bit like bell ringing. I’m looking for volunteers to actually take part in the shows and operate the machines, which is great fun.

What sort of reaction do you hope to get from audiences?

I hope that people will be transported by it. I hope that they will find it unusual, something they haven’t experienced before. I hope that it will enable them to think about other things actually, to have their imagination sparked by these works. And for it to be a mesmerising and immersive experience.

Points of Departure takes place as part of Brighton Festival from 1-23 May at Shoreham Port. Evening performances start at 8.30pm and advance booking is required.