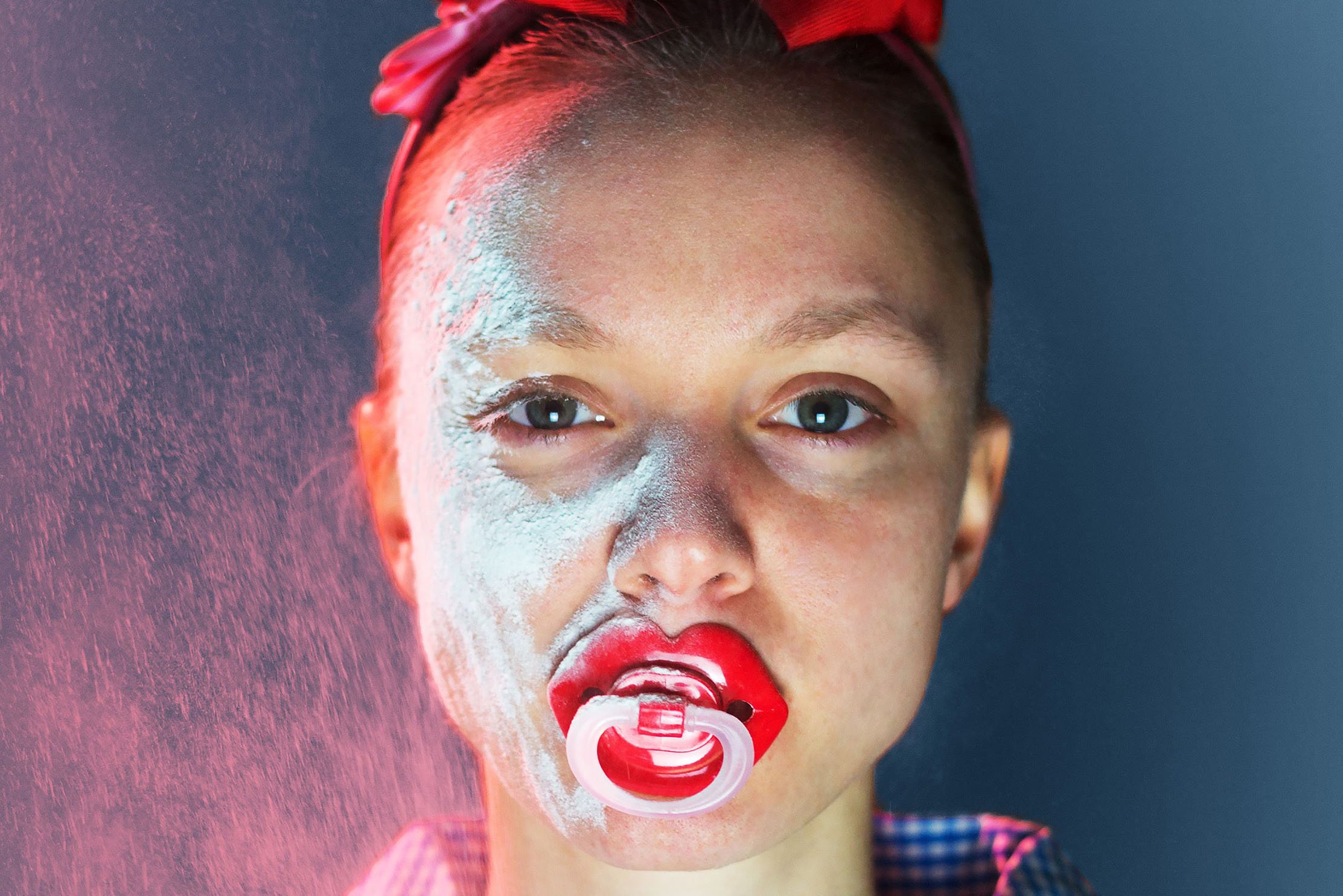 Modern day feminism has focused on empowering marginalised groups in our society, in particular giving women a voice to speak up. Performance artist Katy Dye wants to focus our attention on mainstream culture’s propensity to infantilise women, a line of discussion she believes is often neglected. For her inaugural show in Brighton & Hove, Katy will perform Baby Face for two nights at the Brighton Dome Concert Hall’s The Basement.

Baby Face dissects the politics of how paedophilia is wrong, yet infantilising women is normalised, revealing the hypocrisy in our society. Katy investigates the various ethical discussions this debate conjures up through a highly visual performance. “I’ve been really interested thinking about the moral boundaries between these things for a long time,” Katy said. “I thought about how widely available this sort of imagery is and how mainstream it is in society, but also how niche that word would sound: infantilisation.”

In the show, she mimics the iconic pop culture image of Britney Spears in the Hit Me Baby One More Time music video as an example of culturally accepted infantilisation. “It blurs towards the end of the track as my movements change from sexy to stroppy and jerky as though I’m a teenager in my bedroom moping about.”

Katy discussed how she has grappled a constant confrontation with this word ‘infantilisation’ throughout her life through the body she has. At 27, she explained how some people accuse her of looking much younger than her age, thinking this is a compliment to aspire to. These experiences mean her relationship with the performance is deeply personal.

She remembers talking about the moral debate of infantilisation with a friend: “We’re living in an age where on the one hand, children have never been more protected and kept safe. On the other hand, they are the most sexualised they’ve ever been.” This conversation paired with the treatment she received over time was what triggered the concept of the show to rise to the surface.

After a hugely successful run of shows at the Edinburgh Fringe last summer, Baby Face earned Katy both the Autopsy Award and the Lustrum Award. She highlighted how the show has changed its structure over the four years since it was initially conceived in 2015: “It used to be a lot more of an explicitly autobiographical piece, which the audience couldn’t really understand. Now it’s a much more abstract, very physical performance, which is a lot more action-based.”

In recent performances, Katy has brought out the comedic elements of the show to contrast tonally against the serious nature of the subject matter. The Baby Face UK tour aims to continue this conversation about infantilisation. She spoke of aspirations to tour the show in countries such as Japan and South Korea, where the culture of infantilisation is even stronger and even more obvious in their society.

Katy regresses into various states based on choreographed routines throughout the show, but the performance orbits around the prop of a baby’s high chair placed centre stage. “It is kind of like a collaborator-type figure. In the opening moments of the piece, I am with this baby’s high chair, and I am screaming a text about how people might often think that I’m younger than I am.”

Katy seeks to exhibit a brutally honest image of society’s tendency to fetishize young women: “Infantilisation is a safe way that we can take in childlike sexual images with an adult body. When that does start to blend in with paedophilia, how do we make sense of that in our society?”

You can see Baby Face at The Basement on Fri 8 & Sat 9 March. Tickets on sale for £12 on Brighton Dome’s website now.