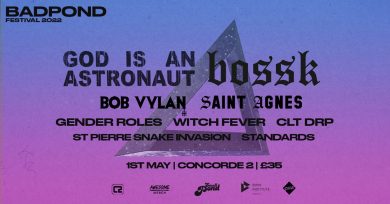 The best alternative music festival by the seaside is back, with Bad Pond celebrating its seventh year. 2022’s lineup is possibly its biggest ever, with huge acts like Bob Vylan, Bossk and God is an Astronaut descending on Concorde 2 on 1st May.

Bad Pond is the festival incarnation of Brighton studio and record label Small Pond, whose reputation for fostering high quality alternative artists has been evidenced by the success of signees like Physics House Band and CLT DRP. Small Pond was founded by a group of friends who literally built the studio themselves back in 2015, and as might be expected from a team with such ambition, a festival was the obvious next step. Small Pond’s managing director Vlad explains: 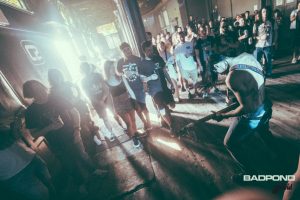 “I started Bad Pond with a fella called Ryan Balch, who used to put on experimental shows in Brighton under the name ‘Bad Math’. I liked the bands he booked, and he liked Small Pond, so we went for a beer and decided to team up and give this a go – I think that was in 2015 – that’s where the name comes from actually: the combination of Bad Math and Small Pond. I think we started it because we wanted to see some bands that other promoters weren’t booking, so in good DIY fashion we just booked them ourselves. We were younger, and dumber, and probably funner, so we just threw all the ideas we had at it and it kept going well, and got better each year, so we haven’t stopped yet. 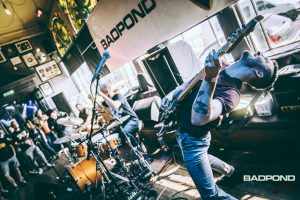 “We tried a few different venues, including a multi-venue event, but in 2019 when we put it on at Concorde 2 for the first time, the event found its home. We don’t want to grow the event any larger than it is, just keep it as a yearly party of friends and bands we love, and do it by the sea, in the sun, with the smell of gasoline from the Hells Angels nearby, greasy burgers, cheap lager, and loads of smiles, just like last year…”

This year’s acts come from across the sphere of the alternative. Fans of gritty, punk-infused pop will love Bob Vylan and Saint Agnes’ Tarantino-flavoured garage rock. Brighton favourites CLT DRP will also bring their highly original EDM-style punk. Fresh from supporting Idles, another much anticipated performance will be from Witch Fever, Manchester’s doomy grunge band with a reputation for a completely manic performance. For connoisseurs of heavy music, Bossk will bring epic, heavy sonic soundscapes, with God is an Astronaut showcasing their highly praised post-rock.

For Vlad, Bad Pond is a celebration of friendship and creativity. “Quite a few people from ‘the scene’ make a trip down for it, and the thing I most look forward to is just seeing old pals, making new ones, seeing music I love and feeling a sensation of carelessness and belonging – neither of which I feel on the day-to-day.”

Strip the Beach Cleans Up 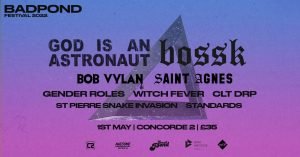