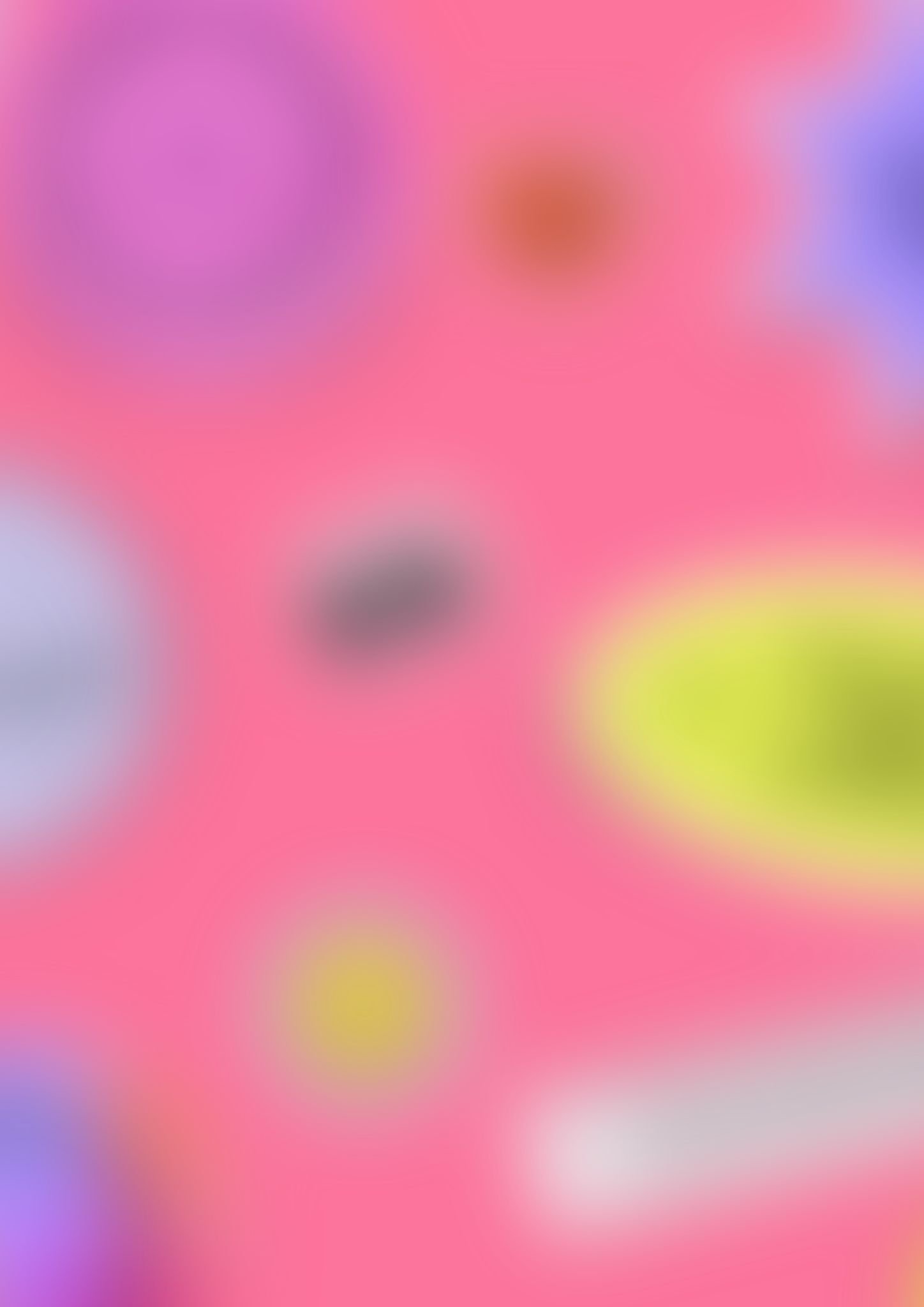 Badass Women spread JOY during ADHD Awareness Month and BEYOND!

Are You Paying Attention?

Women are 4 times more likely to go undiagnosed than men when it comes to ADHD. This may seem surprising, but when you think about it really… is it? Girls tend to be brought up with greater focus placed on controlling emotions, learning how to keep them bottled up until in privacy, to closely observe all social cues, rules and niceties so as to be pleasant company… Essentially, neurotypical or not, girls are taught ‘masking’ techniques to the point where as adults, it comes naturally. Masking or camouflaging is artificially performing social behaviour that is deemed to be more socially acceptable (by neurotypical standards) or hiding behaviour that might be viewed as socially unacceptable. This. Is. Truly. Exhausting.

To the wider community, verbalising your struggle with “keeping up appearances”, if I might call it that, is largely met with sympathy of the kind that is designed to brush the problems away from the sympathiser and back onto you.

“You may be struggling, but you are okay. You just suffer with anxiety. You’ve just got depression. You are just tired. It’s just hormones. You just need to focus.” – Parents and Teachers Everywhere

The reality is that women & girls experience ADHD at least equally as often as everyone else, but due to social conditioning and other factors, they may present very differently from the standard ADHD symptom list developed largely to identify ADHD in young boys.  Let’s take a minute here to appreciate this – if those on one end of a gender binary are struggling to get an accurate list of symptoms, a diagnosis and recognition of their struggle, how do you think it’s going for everyone in between or not on it at all?

A post shared by ADHD & Autism for Badasses ⚡️ (@iampayingattention)

Most women who pursue an ADHD diagnosis do not reach that point until total breakdown. Women with ADHD tend to recognise that they are struggling following major life changes such as a change in employment, leaving home or experiencing parenthood for the first time. One thing that a lot of women recently navigating an ADHD diagnosis have in common is the major life change that came in the form of the global pandemic. It forced a lot of people into a less stimulated existence, one where we had a lot of time for introspection, without the coping mechanisms that we have relied upon until this point.

So the upshot is – a lot of women and non-binary people have had the time to learn about and observe themselves, to do some research (furiously and to the exclusion of everything surrounding them), and open up to others, creating the conversation and community that has been largely missing up till this point. One such community is ‘I Am Paying Attention’ created by Charlotte Mia and Jess Joy. The Brighton-based pair created the “Neurodivergent Community for Badasses” during lockdown, following their own self-reflection and revelations of neurodivergence. The Instagram community, one year later, has almost 70,000 followers – an amazing show of solidarity and support!

“Remember that you are absolutely still YOU.. But now you just have a wonderful community of people who have experienced many of the same struggles here to help remind you that you’re no longer doing this alone.” – Jess and Mia

Jess and Mia have been friends for nearly 10 years now, and they’ve always had a lot of similarities, not just in morals and values, but also in how they experience the world. As it turns out “it’s probably also because we are very neurodivergent!”. When lockdown happened, a lot of their coping mechanisms, like all of us, were taken away. So they turned to each other to do something they’ve been doing together for years – exploring their life’s experiences through a lot of self-reflection and analysis over extremely long conversations. This is something Jess thinks is “actually quite a typical thing of neurodivergent people to do” in order to understand why life is like the way it is.

“Unlike neurotypical society, we are here to remind you that changing things up can be a positive thing, and you don’t have to stick to making something work for you forever.”

After years of seeing snippets of information here and there relating to ADHD and now having more time to spend on themselves, “I think we both sort of arrived at the same or similar conclusions at around the same time.” The lack of awareness of ADHD in women, and the diagnostic criteria moulded around young boys not holding them back, Jess and Mia delved in deep into research about the topic. Jess recalls first looking into “highly sensitive people, and it spoke a lot to me”, before further research led her to come across ADHD, and more importantly, other adults who had ADHD. She found that her original hunch, of being a highly sensitive person, shares a lot of ‘traits’ with autism, and in fact many of the autistic community feel as though it’s a label given to avoid an autistic diagnosis!

A post shared by ADHD & Autism for Badasses ⚡️ (@iampayingattention)

The more she listened and learned from people online, the more things started to resonate, and the more she began to understand what ADHD might look like in her own life. From there Jess and Mia had a lot of “unpacking” to do! What they quickly realised was that “without each other we wouldn’t have been able to navigate the journey in the positive way that we did, and we realised quite quickly that we just weren’t feeling overly represented by the way ADHD was described so often”.

“The hardest part about ADHD is learning to trust your own approach over what society tells you you should be able to manage.”

So that’s how they came to form ‘I Am Paying Attention’: a community for people who are neurodivergent and looking to understand their experience and share it with others, just like Jess and Mia have been doing together over their long friendship. One look at their website, which has community written articles on a range of topics, from day to day life with ADHD, to recognising who you truly are.

Jess and Mia are “very particular and very intentional” in the way Mia designs their imagery, to be “fun to look at” and the way that they select and write content, to be “easy to process for neurodivergent brains, especially ADHD brains”. This is also available in the form of self-reflection manuals, created by the pair, which they have started to circulate as widely as possible. They aim to help anyone researching ADHD to get their thoughts on key topics down in the same place – setting out clearly some of the symptoms and likely daily consequences of those symptoms and giving room for someone to write their own thoughts down on the matter. How might ADHD present itself in communication with others, or in your money and finances, for example? 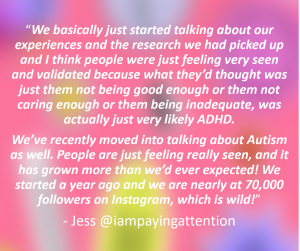 The pair are now partnering with some people from Sussex Uni, and with someone who has experience in the corporate environment and are working on workplace training and inclusivity for universities – “So we have our fingers in a few pies!” – They also recently launched a mini campaign which involved putting leaflets in places where women might go to access a diagnosis of things like anxiety and depression and are trying to get their work into places like doctor’s surgeries or therapists to raise awareness of the lesser-known symptoms of ADHD.

“Your ability to accept yourself as you are is just as important as being focused on growth.”

These two badass women were a joy to speak to, I loved hearing about their work, reading their manuals, and using it to analyse my own behaviours. I think neurotypical or not, sure or unsure, diagnosed or undiagnosed, taking the time to visit I Am Paying Attention’s Instagram page @iampayingattention or website iampayingattention.co.uk is well worth the effort: as a form of self-care, self-discovery and awareness raising.