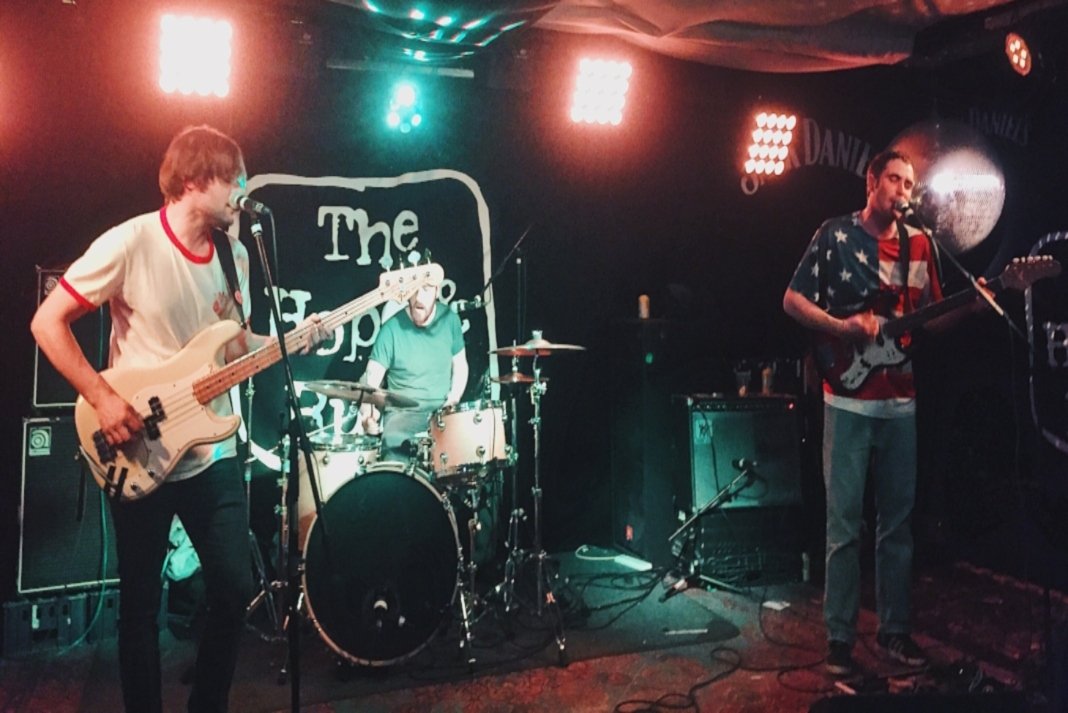 Bee Bee Sea is a punk band formed in 2015 in the isolated town of Castel Goffredo in Italy. The Italian trio was the main act for a night full of energetic and psychedelic performances, with supporting bands such as the Fat Earthers and Glitter Piss, all in Brighton’s own Hope and Ruin on the 2nd of May.

As soon as Bee Bee Seas stepped on stage and started playing their first song, the crowd was almost mesmerised by their aggressive and powerful performance. Their raw energy quickly influenced the spectators, who started jumping to their catchy tunes and tried to sing along to band’s fuzzy and sometimes barely comprehensible vocals. Bee Bee Sea’s live performances are known to be very energetic, and the member’s kooky and fun personalities definitely reflect on stage, whether it be wearing a dog mask or rolling on the floor while singing.  After the gig, the members of the band Wilson Wilson (guitar/vocals), Giacomo Parisio (bass) and Andrea Onofrio (drums) sat down with us to talk about their writing process, why they sing in English and their upcoming projects.

If you had to describe Bee Bee Sea in a sentence what would you say?

Garage psych music by three guys from the same small town lost in the Po Valley.

How was the band formed?

We all come from the same town, so we knew each other before the band was formed, except for Andrea who replied to our post looking for a drummer, and he had only been playing for a few months! Anyways, we were just really bored and “When there’s no good shit around you better form a band”.

Who are your musical influences?

There are many different ones, from the Oasis to the Oh Sees.

How does your writing process work?

Usually, we just Jam in our rehearsal space and when a good riff or a cool melody comes up, we start singing over it and one rehearsal after the other we develop and better it more and more. Even when a song is not 100% finalized, we start playing it live.

How long does it take you to come up with a whole album?

Why have you decided to write in English instead of Italian?

We always loved English or American bands and we’ve been listening to music in English since forever, so it just seemed natural to do so.

So, it’s not because you think you’d have more success if you sing in English?

It’s the opposite, if we wanted more success we would sing in Italian! Singing in English and performing in the UK or the USA means that there is much more competition.

Was this your first time performing in the UK?

We’ve already played in the UK 3 or 4 times, in London and Bristol, but it was our first time in Brighton.

What was your first impression of Brighton?

We’ve really liked it! We were walking around and ended up in the Pavilion and for a second it looked like we were in a place like Istanbul. Generally, the vibe of the whole town is very chill and it’s definitely one of the coolest towns in the UK that we’ve visited so far.

Less than a month ago you’ve released a new song, “Be Bop Palooza”, is it a teaser for an upcoming album?

Definitely! We’re recording the album in June and we already started doing some songs live, it will hopefully come out late next year.