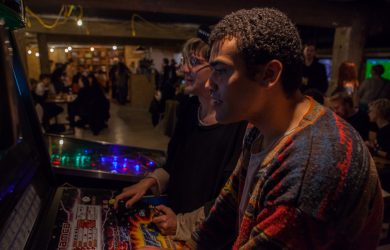 Brighton & Hove is no stranger to the recent gaming nostalgia hit. Over the last few years, the city has been leading the charge in the rise of bars and establishments offering a side of retro gaming or dice-rolling with your usual pint. We’re going to take a look at some of the best places to get your gaming kicks in Brighton & Hove.

Following its renovation, The World’s End transformed from a traditional pub to Brighton’s most well known game bar. Whether you are dodging terrorist bullets on the Time Crisis 2 arcade machine, strapping into one of the four virtual reality booths, or racing up to nine friends in the upstairs stock-car racing arena, the World’s End is the most unique bar of its kind to find in Brighton & Hove. Try not drink too many of the 50 craft beers they have available before strapping into the virtual reality booths. You may be flying off to a magical new land but the other patrons at The Worlds’ End can still see you.

A few doors up from the World’s End is the delightful Phoenix Coffee House. With its rustic retro vibe, Phoenix Coffee House is a wonderful place to sit, watch the world pass by, and waste away an afternoon perfecting your ollie in Tony Hawk’s Pro Skater 2. An impressive collection of retro consoles and games adorn Phoenix Coffee House but it’s their excellent coffee, delicious food, and warm atmosphere that makes the overall experience. And it’s only further complemented by the background noise of Sonic the Hedgehog speeding through Emerald Hill on an original Sega MegaDrive.

Anyone who visited Dice Saloon’s previous location will not be shocked to hear they recently moved to a new larger location. Most nights the board-game and tabletop fantasy game cafe were filled to the rafters. But their new warehouse-sized location Dice Saloon has been able to expand into a space far more accommodating to their popularity. Dice Saloon offers a location to play board games, roll some D-6s for critical damage, or enjoy a range of hot-snacks from their cafe. Their excellent board game shop boasts the latest board games at very competitive prices. And they also have a selection of board games which can be borrowed (kept on site of course) to be played with friends. Dice Saloon is the perfect way to introduce friends to the world of board games.

Gaming center’s in South Korea are as common as newsagents, however, the UK has struggled to jump on this bandwagon. Newly nestled next door to Dice Saloon is the neon glowing gaming hub of PcBangUK.  PcBang.Uk brings the South Korean gaming hub idea to Brighton. It does this by offering powerful gaming machines, a wide selection of games, and comfortable chairs to lose hours to. Alongside this, the low hourly prices mean you have no excuse to not try out some of the latest cutting-edge graphical games without having to remortgage your house for a new graphics card.

Sitting on the beachfront in the shadow of the Brighton Palace Pier, C:\ Side Quest is a chilled out cafe offering areas to play the latest video games or one of the board games from their collection of over 120. At C:\ Side Quest you’ll get a real feel for their passion for gaming. Cult Lucasart’s adventure characters decorate the walls in the form of cross-stitch, and retro gaming consoles fill the giant screens with some more obscure cult classics available. C:\ Side Quest is the perfect location for a lazy Sunday afternoon laying tracks in Ticket to Ride or dodging blue-shells in Mario Kart 8 all the while sipping on a delicious americano.

Recently many confused locals may have found their usual watering hole transformed into something more reminiscent of an 80s arcade. This is thanks to the Retrobution team of Chris and Kat. Hardcore retro fans and dedicated games, they travel from venue to venue around Brighton & Hove (as well as further towns such as Worthing) setting up a small army of CRT monitors and retro consoles. What makes Chris and Kat’s ongoing commitment to providing retro gaming to as many as they can even more impressive is that all their games and consoles are originals; not an emulator or rom in sight. And nothing can beat playing your childhood favourite games in exactly the way they were intended to be played.