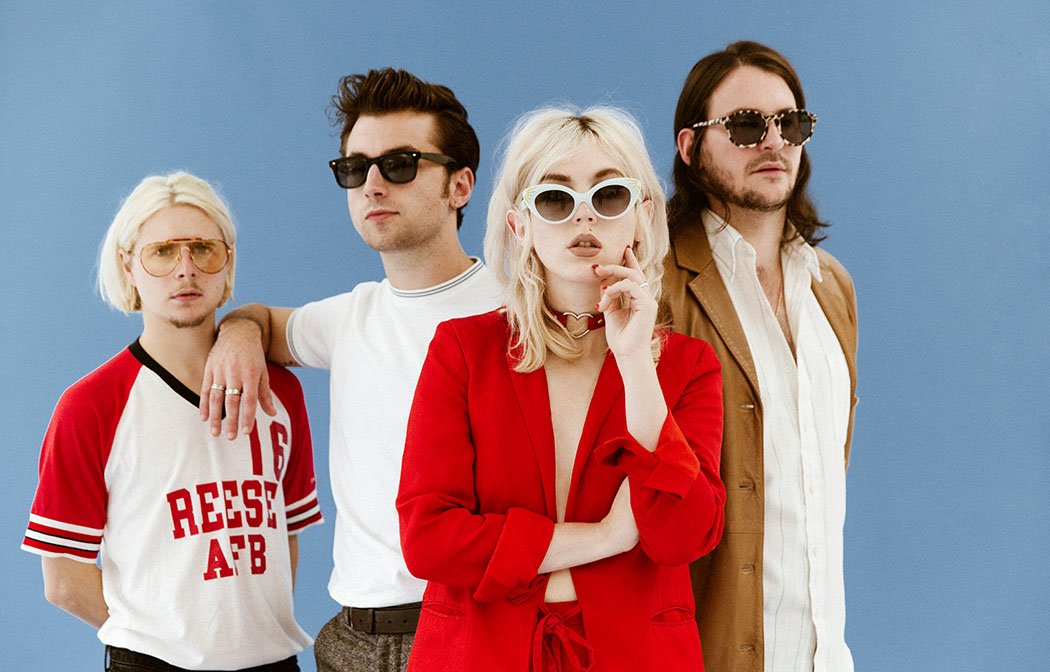 Black Honey have always pushed themselves to be unique, their aesthetic, a pastiche of pop-art, Americana and Baz Lurhman style neon-soaked symbolism quickly setting them apart from their contemporaries. At the helm of this carefully cultivated imagery stands front-woman Izzy Baxter, a Brighton native with an ear for melody and an eye for all things retro. “Everything else on the record is kind of like an open journal,” Izzy talks about the personable nature of her music, with the recent single Midnight being a notable exception. From a young age Izzy kept a dream journal to help cope with night terrors, over time this bled into all other facets of her life, becoming a coping mechanism and forcing her to write most evenings.

“I WANT THEM TO HAVE THEIR OWN PERSONAL RELATIONSHIP WITH IT.”

Being this open with your writing has the potential to alienate fans, despite writing from such an intimate perspective Izzy constantly strives towards accessibility in all that she does. Their self-titled debut album (out 21 September) is their poppiest project to date, favouring ear-worms to the grungy guitars that defined their earlier sound (although the latter is still there) and presenting itself with a renewed self-assured confidence unlike anything that we’ve heard from them before. There seems to be a number of reasons for this stylistic shift. “I like people to have their own relationship to my songs rather than getting stuck into how I might want them to experience it. I want them to have their own personal relationship with it.” Izzy frequently stresses the importance of their fan’s perspective to the songs while keeping the sound that helped establish them apparent, “we created some sort of Frankenstein’s monster, it became a hybrid creature”.

“ALL THE RULES I’VE PUT IN PLACE, WE COMPLETELY DESTROYED…”

The release of the new album seems to mark a permanent shift in values for Black Honey, a conscious reach towards something altogether more universal than their previous work whilst maintaining what made them so appealing to their fans in the first place. “I’m really interested how Midnight goes down because it’s the furthest astray from what people would originally identify Black Honey as, but it’s still really Black Honey! All the rules I’ve put in place, we completely destroyed for that. That’s all I wanna do, push it harder.” Izzy’s attitude is hardly surprising for someone whose band are starting to find their own feet on an international scale, having previously toured Europe playing with Royal Blood and At The Drive In last November. The band are set to go on a European headline tour this October to promote their debut. Being no stranger to touring the continent, Izzy reflects on her favourite places to go in Europe. “I’d say our favourite place to play is the Netherlands, we’re just weirdly big there… Last summer we toured there every week for six months.” As much as she loves Europe, it’s the Britishness of Holland that Izzy feels accustomed to, she talks of the parallels between the country’s music scenes and their surprising successes abroad, having had multiple “radio sensations” across the Netherlands. What influences Black Honey is obvious enough at first glance, Andy Warhol and 70s pop-culture references are found across every aspect of their work, mainly making itself apparent across the bands image and persona; their fashion choices, music videos and artwork scream American pop-culture. Citing the ‘factory’ scene as a huge influence on her creativity Izzy talks more about what compels her to create, “I love Patti Smith and Charles Bukowski. I love writers and poets.” She talks about Rupi Kaur and the importance of literature to her overall process telling me how she prefers poetry to novels, finding them far easier to process and subsequently take immediate inspiration from. It comes across during our conversation that Izzy prefers a sense of urgency in what inspires her to write and work, either finding influence in the fleeting moments of art and iconography that have defined modern culture or through using brief and relatable moments of change and fear to colour her work with a more personable light. 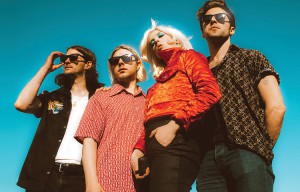 “I’M REALLY BIG INTO THE IDEA THAT EVERYTHING TRANSFORMS”

After talking about her love for poetry (at one point she refers to Rupi Kaur as a “fucking rockstar”), Izzy touches on the importance of relatability in her music once more, she talks for a while about versatility and how that allows listeners to form their own relationship with her art, reiterating that she doesn’t want to tell people what to think when they hear her music. “It’s awesome, I’m really big into the idea that everything transforms, when you’re on stage and you play a song that momentarily transforms into whatever you relate to it at the time.” Izzy tells me that this perspective is nothing new, the meaning of one of the bands most popular singles Corinne, released in 2015, has been misconstrued since it premiered with many people thinking of it as a romantic song when the song is actually about a disagreement with a friend, “I was like ‘no, but that’s awesome that you took that from it!’” Izzy says in response to people who questioned her sexuality over the song, laughing whilst explaining the unintentional implications of the lyrics and how some of their songs could be taken too literally.

Izzy’s work ethic is synonymous with her coping process, she mentions to me how it was a gradual process, accumulating productivity to the point where they could work consistently as a band and will themselves to keep playing and practising. “It’s taken us all this time to harness this productivity for what we’re doing but everyone’s driven and passionate. Every day we wake up and think ‘what can we make today that will be fun?’” She laughs again and talks about how grateful they are that they’re not stacking shelves in Tesco for a living, saying that she believes it makes them work harder. Izzy has a contagiously upbeat and humorous way about her, calling me out on asking her where her favourite place to play in the U.K. is. “Oh my God that question is so loaded because you know that we’re from here!” She recalls that playing Concorde 2 was a dream come true, clarifying how she used to clean floors and serve drinks across Brighton when she was younger (as well as being “on the dole” here), she also says to me that she finds it an honour playing there again after almost a year of absence. Our conversation ends with Izzy talking about how well the new material has been received at festivals, her infectious mood leaving a smile on my face as she hangs up the phone.