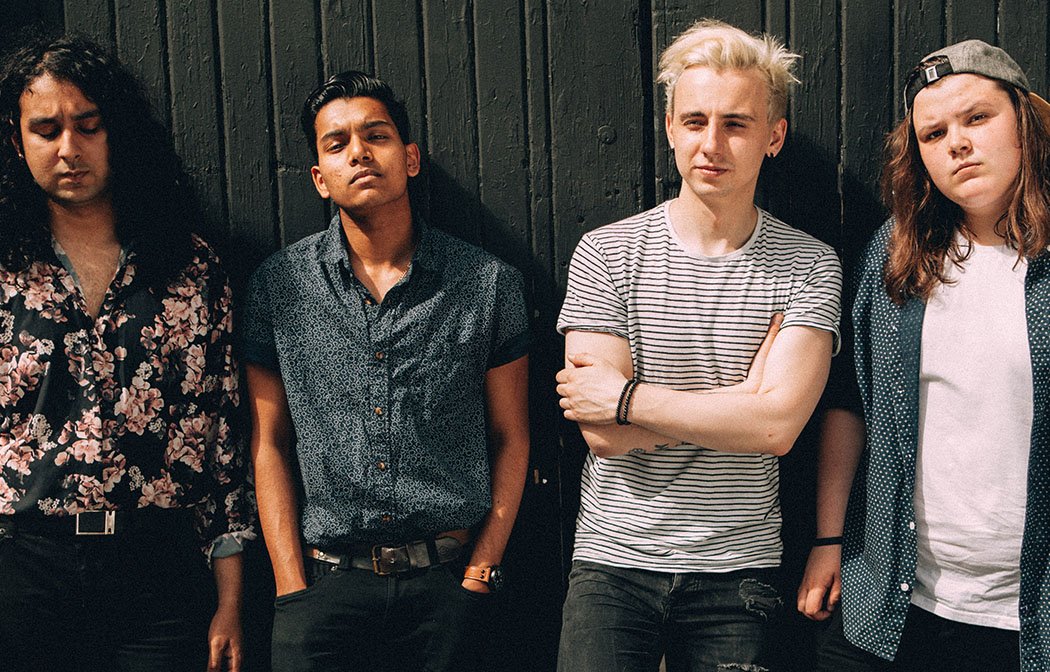 Bloxx, a young, indie-grunge four-piece based in Uxbridge, have had a hell of a 2018 so far. Their first single of the year, Novocain, saw them championed by Annie Mac on Radio 1, whilst they supported huge bands like Pale Waves and The Wombats and sold-out their own UK headline tour in the meantime. They’re now in the process of a UK headline tour  that will see them through to the end of November. This will bring them to Komedia Brighton on Sun 18 Nov. “Any chance we get to play Brighton, or just go there, is really nice,” says Taz, lead guitarist and backing vocalist for the group. “Brighton holds loads of good memories for us – last time we were there was for The Great Escape, and we packed out Horatio’s. And there’s so many amazing bands from Brighton too, whether it’s Black Honey, Royal Blood, The Magic Gang – it feels like everyone’s from Brighton at this point.”

Whilst their 2018 growth has been exponential on their already impressive introductory year in 2017, the group seem to take it all in stride, not batting an eyelid. “We don’t question or say anything about our growth. We don’t want to ruin or jinx our good luck so far. I feel like if we stop to think about all this, it’ll be over.” Taz tells me half the band have already achieved a lot of their life goals, perhaps explaining why they don’t seem to be too fazed by their continuing success: “Theoretically, I could die tomorrow and I’d feel like I’ve died a well-accomplished person.”

Speaking to Taz, I really get a sense of the excitement and bewilderment fledgling bands like Bloxx, who are all aged 20-22, must feel before they become used to the cyclical nature of the music industry. “Playing Reading and Leeds was a dream come true. It’s amazing enough to be there, but to be an artist playing there, and have people pick your music to come and watch, will never become old for us.” He goes on to describe the surreal nature of putting faces to the numbers you see on Spotify that indicate how many times a song has been streamed. “So many diverse people come to see us after hearing us on Spotify, its mad! At Sound City, three middle-aged Scouse women came up to us after we’d played and wanted to be our groupies, thinking we were much older than we were after listening to us on Spotify!”

The controversies Spotify has whipped up in its ten years of life is no secret, with many high-profile musicians such as Taylor Swift, Thom Yorke and Beck having slammed the music streaming mega-company in the past. Bloxx, however, are refreshingly thankful for its existence and its supposedly meritocratic nature. “If not for Spotify, we wouldn’t be where we are today. At the start of this band’s history, four people agreed to write a song together and put it out there, and without Spotify, it wouldn’t have been discovered to the same extent. There’s no reason to hate something that’s one of the biggest reasons we’re listened to in the first place.”

Two years into their career, Bloxx are a band with a successful future ahead of them. Having not even released an album yet, their music is already tipped to be the ‘new’ Indie sound. Taz, however, is content with the present. “I’m a huge fan of Guns N’ Roses, and I watched a video recently of Slash and Duff being interviewed in the 80s. They were asked where they see themselves in 10 years, and they said it doesn’t matter. What matters is now. We’re going to make music until we can’t anymore. I’m the same as them; if you concern yourself with trying to stay relevant, that worry is going to make you struggle, and make your output worse. So, let’s just continue making music, and if we’re still here in the future, great – if we’re not, well, we had a fun time.”