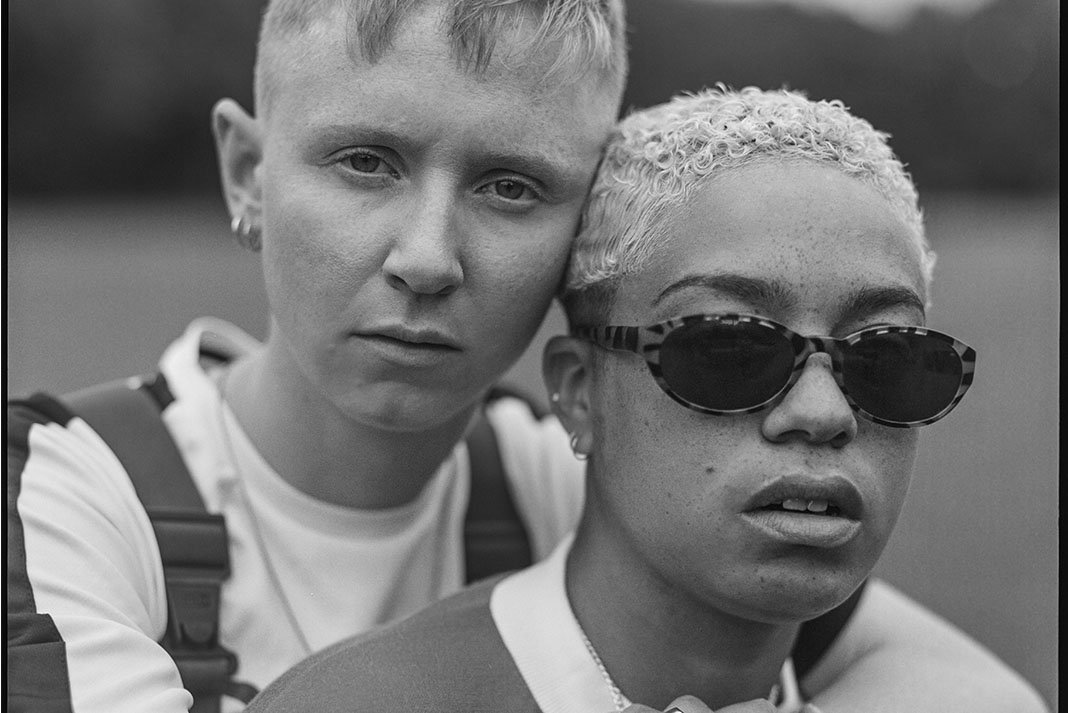 A lot has changed for Nimmo over the last few years. The band went from a five-piece group signed to Sony, but then decided to separate from the label to control their own direction and release their music independently. Now back to the dynamic dance-pop duo they started as, London-based Nimmo released their debut album, The Power, earlier this year – a 14-track record evoking strong disco beats and emotive lyrics. Sarah and Reva share their memories spent while studying in Brighton and realising their DIY musical roots.

You both have such a strong partnership. What are your tips for keeping a friendship so strong?

There’s no secret or method to it. We naturally respect each others space and time. But that is fairly basic when working with friends. The rest is easy. Just have lols. That’s the most important thing.

You both went to the University of Brighton together. What drew you to the city and what do you love about coming back?

We knew we wanted to keep writing songs and developing as artists and we wanted to be near London to keep doing gigs etc and we knew we could do a bit of that in Brighton so it felt like a good move. We have such hilarious memories of Brighton. Upside down binge drinking in Revenge is definitely a vom-inducing but extremely fond memory!

Do you have a favourite venue in Brighton, to play or watch?

We have a lot of good memories of playing in Brighton – mainly at Prince Albert. When we were in uni down here, it would be the place where we’d drag all our friends down to see us perform. It holds a place in our hearts from those shows and nights out!

You left your record label three years ago to go independent. What was your decision behind that and how has your path to success changed as a result?

Being signed to a major record label was bittersweet in that we suddenly had so much opportunity and platform to really elevate the band from where we were at before, having just left university. Being thrown in the deep end like that made us grow and learn pretty quickly, which was invaluable for us. But we come from a really DIY driven place and we definitely do our best as NIMMO when we are in the driving seat of the project, so it was the right time to take the reins back a bit in order to be truly happy.

Your music is a marriage of strong dance beats and thoughtful lyrics. You can definitely hear a likeness to bands like ‘The XX’. Who else do you think has had an influence on your sound?

A lot of Chicago and Detroit house, plus so much from the UK dance scene. We are long term fans of Tears For Fears, Stevie Wonder and Carol King etc but our influences and inspirations change week by week. Recently we’ve been inspired by Tierra Whack, Christine and the Queens, Billie Eilish and lots of Italo House. There’s a lot of new stuff all the time to get your head into and we do!

You filmed the video for your latest track ‘No More’ in Lisbon, Portugal. What made you choose to shoot in this location?

At the end of last year, we moved to Lisbon for a couple of months to get out of London together and write new material. ‘No More’ was always a track that felt really escapist in its sound, so we flew our friend Joel Stagg over to Lisbon to film us for a week out there. It’s definitely our favourite video we’ve shot to date as we just got to honestly run around and be silly and then Joel would shout at us at random points to do impromptu lip-sync. It was a lot of fun.

Having released your long-awaited debut album The Power this year, what has the response been like?

It’s been so so great. The best part has been how happy our fans have been and seeing them feel like the wait was worth it. Keep people waiting is never ideal so it’s nice to see our fans just exploring it and enjoying it every day.

Can you describe The Power in three words?

As exciting, young, queer female musicians, do you think you are filling a gap that the current music landscape is desperately seeking?

It seems that there aren’t many people that cross over the dance scene with pop in the way we do. There is definitely room for more gender queer musicians in the mainstream so I guess in that sense, yes.

What are your next steps? Where do you envisage yourselves this time next year?

Next, we will be giving you more music which we are so excited about and doing lots of touring. So pumped to reach some of the European and UK cities that we have been to for a while and get back over to the States and Australia too!

What are your favourite celebrities wearing on the red carpet?