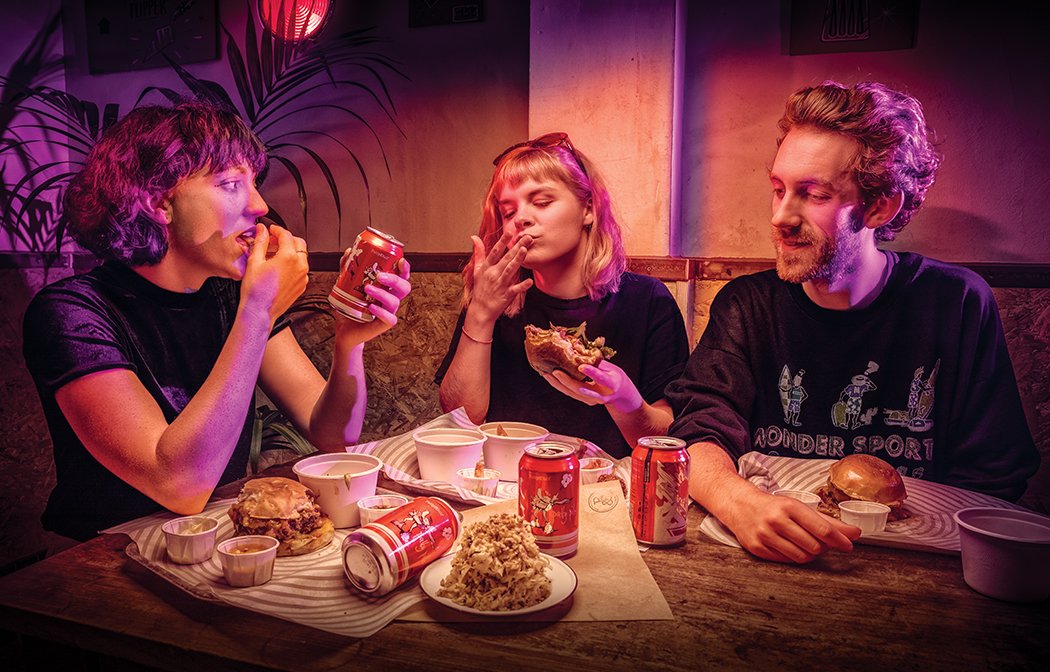 Listening to Projector’s music and a scan of their social media suggests a gravely dark band who roll their eyes at journalists who try to understand their music. But as I sat down with Lucy Sheehan, Demelza Mather and Edward Ensbury in Patty & Bun’s back room, I could tell this interview might not be quite what I’d expected.

To start with, Demelza the drummer has baby Felix to contend with, so it’s more burps, nappies and early nights than sex, drugs and rock’n’roll. “He is the tour baby which is amazing but also really difficult. These guys are pretty awesome for putting up with it,” appreciates Demelza. Bassist and vocalist Lucy adds, “When we’re on tour and everything’s really gone A over T, Felix will do something ridiculous like put some dinner over his face or eat some sand. It really puts things into perspective.” Demelza’s inclusion in the band marks the end of a period of trouble where Projector went through a “carousel of drummers”. Fortunately, as guitarist Ed points out, Demelza then “stepped in to fill the void.”

Despite their initial sunny disposition, we’re soon moving on to talk about something that feels a bit more familiar to the band: their dark side. With dark-pop tinged songs like Break Your Own Heart, it’s clear that they about as far as you can get from a KC and the Sunshine band, while still treading the fine line of the pop genre. But the source of their darkness surprises me. Ed tells me, “Every time I think about making a new thing, I want to go darker, it’s fun to be dark.”

“There are loads of bands that I like that are really fun, but I don’t feel like we’re fun people. I like to be serious – Radiohead serious.”

Despite abrasive Sonic Youth-esque songs such as their latest single, I Am Shamed, the band do have a soft side, exhibited in songs like 2017’s Dreaming. So, how does the band strike a balance with songwriting split between Lucy and Ed? “Lucy was making all the bangers and I was doing all the chilled songs and I didnt want to be typecast, so in response I wanted to make the loudest, brashest song possible,” says Ed. “But it’s weird listening to, because I’m really not an angsty person.” He then elaborates on the pair’s songwriting partnership: “We thought we could be completely open with each other and critique each other’s work, we thought we were big enough people to get over that. In the end, we basically couldn’t make anything.”

Lucy explains the reason for their unusual approach is that they see a lot of bands just doing the same things after the other. Bringing up this subject seems strike a nerve too, as she then goes on to say, “It annoys me when the one criticism we’ve ever had, is that it can be confusing to have two different writers or two different vocalists. I mean, what’s wrong with that? Loads of bands have had two different singers and been successful – look at The Pixies!”

As a new addition to the music scene, the trio are still paving their way in the industry – something which has been a challenge financially. Lucy said: “Our first two tracks Dreaming and Love went nowhere because we didn’t have any money for PR. If you haven’t got a PR person pushing it, it never gets listened to.” The band agree this is particularly influenced by the digital age and subsequent saturation of the industry. “You do have to make sure that you’re quite good,” Lucy adds.

Projector are celebrating the release of their first EP next month, entitled How Does It Feel. Ed tells me, “When you’re just putting out singles, you have to a catchy song straight away – but we’ve got one which we wouldn’t have made if we weren’t doing an EP.” Lucy elaborates about the track in question, Full Circle, which is “not really mainstream music, but there is still a chorus to it.”

The EP will launch at The Haunt on Fri 9 Nov – their biggest headline show to date. Lucy said: “We’ve been confident in filling Green Door and places like that, or the Hope. It’s a jump up. It’s where all international bands come and play, it’s huge.”

With bands like The Magic Gang, Dream Wife and Black Honey all spawning successful careers from our city, it’s high time another follows in their footsteps – and Projector are well on their way.