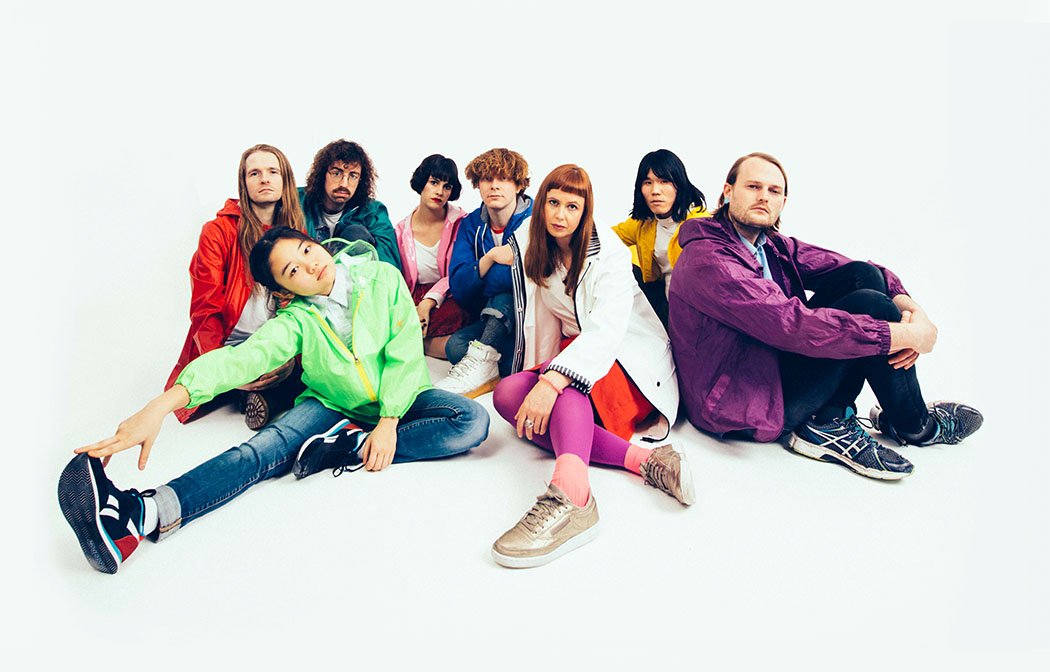 Quirky art pop collective Superorganism encompass the modern generation with an international line up and an emphasis on sampling and the digital age. Ahead of their gig at Concorde 2, guitarist and producXer Harry spoke to us about their debut album, cultural exchanges and playing Concorde 2 for the first time.

You guys adopted pseudonyms for the band; what was the thinking behind that?

It’s an interesting thing: when you start out you’ve got this persona that you’ve built over years – it’s the way that your mum knows you – but it’s a different vibe when you get into being in a band and playing live. I suppose it’s a separation for some people. I remember reading a book about Iggy Pop when I was younger. It talked about how James Osterberg (his real name) was a grade A student, but when he started to take acid and joined a band he took on this persona – and Iggy Pop was born. That was the thing he did to bring himself out of being a low-key grade A student to being a frontman who could go on stage and be fearless.

There are a number of nationalities and backgrounds present among the eight of you – how does that influence the music you make?

On the one hand it definitely does influence people in the sense of where you are from and the environment you grew up in. There’s a cultural exchange when you’re working together and showing each other new music but at the same time there’s the contradiction of that with the internet. It kind of takes away a lot of context. Since the early 2000s you’ve got the same access to the same thing. It means you can end up with the same cultural reference points even with having had totally different experiences in the culture that you were brought up in.

Tell us a little more about your latest single Night Time – why did you decided to release it as a single?

It was a joint decision between the record label because you don’t always when know you’ve written a single. I was actually reading an interview with Paul McCartney yesterday where he was talking about when he first wrote Get Back. He didn’t see it as one of the best songs on Let it Be but the record label heard it and it ended up being a hit. I agree that you write songs and you don’t necessarily know. I remember thinking Everybody Wants To Be Famous would make a good single but with Night Time I always found it quite contemplative. The record company thought it was a good thing to go for though – so here we are.

You mentioned Everybody Wants to Be Famous, can you elaborate on its satire of fame and celebrity?

The initial idea for it came about through living in New Zealand and they had their own version of the X Factor. It only ran for one season but I remember thinking how ridiculous! I remember thinking there’s an element of humiliation in it. I thought it was such a Black Mirror-esque almost dystopian thing in our modern society. And it got me thinking that everyone wants validation. Eventually I came around to this thought that instead of it being everyone’s desire to be famous as being this thing I looked down on I ended up really sympathizing with it. You know what? I’m trying to be a musician myself –  it’s not really for me to judge the methods that other people use to get validation.

Were you happy with the songs featured on the debut album and how it was received?

I couldn’t really have anticipated it all, we put out the first ten songs that we wrote. We had 15 completed songs which we submitted to Domino about this time last year. We worked really closely with Laurence Bell. We had a meeting with him and he said, ‘I strongly suggest that instead of releasing all 15 of them you release the first ten.’ The response we’ve had has been phenomenal. We’ve had so many good reviews and people coming to shows. There’s so many stories about how much people love the album. It’s amazing.

Social media and the digital age are explored quite prominently on this album; as millennials is that something you were keen to talk about?

The theme I identified with was the interconnectedness between things. People is obviously a very prominent one because we are all humans and we are operating in this modern world where the interconnectivity between individuals is huge. How that shapes our culture and personalities I think is something we’ll look back on as a cultural shift in thought and world consciousness..

What are your plans for the future?

We’re already pretty far through our next record. We had some really good songs left over and then we haven’t really stopped working at it since. We’re definitely not going to be one of those bands where you wait four or five years for something new.