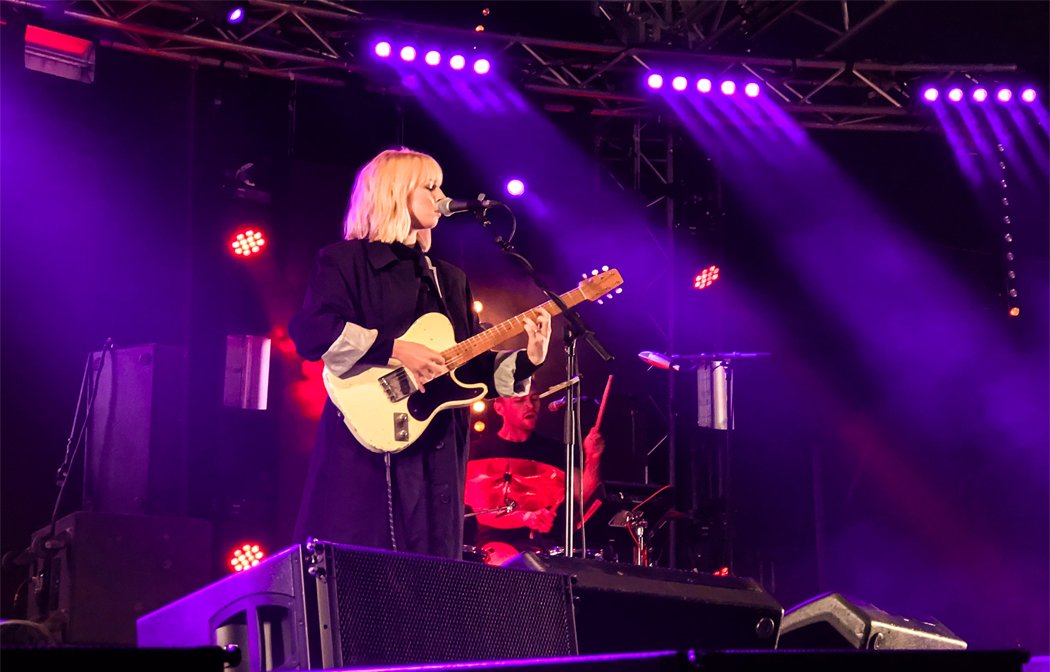 The chances of the first song you wrote when you are 15 becoming a online sensation is next to none, yet that is the story of Fenne Lily, with Top to Toe racking up 25+ million listens on Spotify alone.

Bristol-based singer Fenne Lily was set to open up The Grand Pavilion Stage at Festival No 6 when I managed to quickly chat with her amidst of her busy two-performance schedule and general festival craziness.

Whilst growing up in the middle of the countryside, Fenne exclaimed she didn’t grow up surrounded by music at all. “I didn’t go to a lot of shows, but I watched School of Rock when I was like 11 and I just really wanted to play an instrument, which is just so dumb but I was home educated for a bit and decided to start piano lessons.” From then on, she soon found her passion and talent, with her writing Top to Toe.

As she reminisced about her school years, it soon became apparent that she struggled with bullying, with music acting as an distraction. “It’s always been something that I use to escape the fact I don’t like whats going on in my life – it’s like a really healthy addiction.” Although we both joked about the pretentious, popular school girls from our past, the lighthearted tone shifted as it soon became apparent she was deeply affected, “I don’t know if this happened to you, but it happened to me where all the girls in my class were like ‘we don’t like you anymore’ and then the next week its someone else.” Being the stronger person, she decided to not get involved and write music instead.

Breaking into the music industry can be difficult, but Fenne decided to go at it slowly. “I didn’t rush anything and I knew that once things go well, then they start going quicker and you don’t really have a lot of time to think about how you are portraying yourself.” Despite being young, theres a sense of wisdom surrounding her decisions to go it alone and take things as they come naturally, soon deciding to play small shows, work with her friends and not introducing a label or any big management. “My manager is one of my best friends so its always been very low-key and I think that makes for a slow process if you learn what you have to do in order to get to the next step.”

With this, Fenne released her much anticipated debut album On Hold earlier this year. In her own words, she said she once described it as “the musical equivalent of someone being really angry with you but smiling when they are shouting and it makes you feel really strange,” laughing she states it was basically written about several break-ups during her teens, but she’s “reticent of calling it a break-up album because I don’t like the impression that it gives of the person who has written the record. I channelled my pain into something creative when they just went and slept with other girls.” With each lyric describing how many teens feel growing up, giving a snapshot into the feelings and processes of a teenager between 15 and 17.

To calm herself down from the school drama’s and relationship break-ups, she fell in love with Angel Olsen’s Unfucktheworld, which Fenne has just released as her first released cover in collaboration with Spotify Singles. Purely covering it now, as “the world’s really fucked so the title really fits right now, and although it’s more of not wanting to be with someone, I wanted to make it angrier. I’m at a pretty angry stage of my life, like I don’t want to be a singer songwriter, I just want to be in a band.” By covering the song, she felt it was her way of getting that across now that she has two band members.

To lighten the mood again, and knowing one of her favourite artists was Phoebe Bridgers, I asked if she could create a similar British ‘Boygenius’ group, who would she include. Her answer being a slight surprise, picking out two of her friends. “Willie J Healey, as he’s just got the best voice and the best way of writing songs, and probably my friend Emily Isherwood, who used to be in a band but now goes under her full-name, and she’s just an angel but sings like a fucking badass,” she says laughing.

As our interview came to a close, I asked what’s for the future?

She’s off on tour with Lucy Dacus in the UK, and Andy Shauf in the US, and her record is all written, waiting to find the right producer and place to record. “I want to record it all in a week. I like the idea of recording it in the order that its going to be on the record and being able to hear the fact my voice is knackered and broken by the last song.” And being a huge fan myself, it’s one I can’t wait to hear.

Fenne Lily comes to Brighton’s The Haunt on Mon 29th October. Her debut album On Hold is available now.