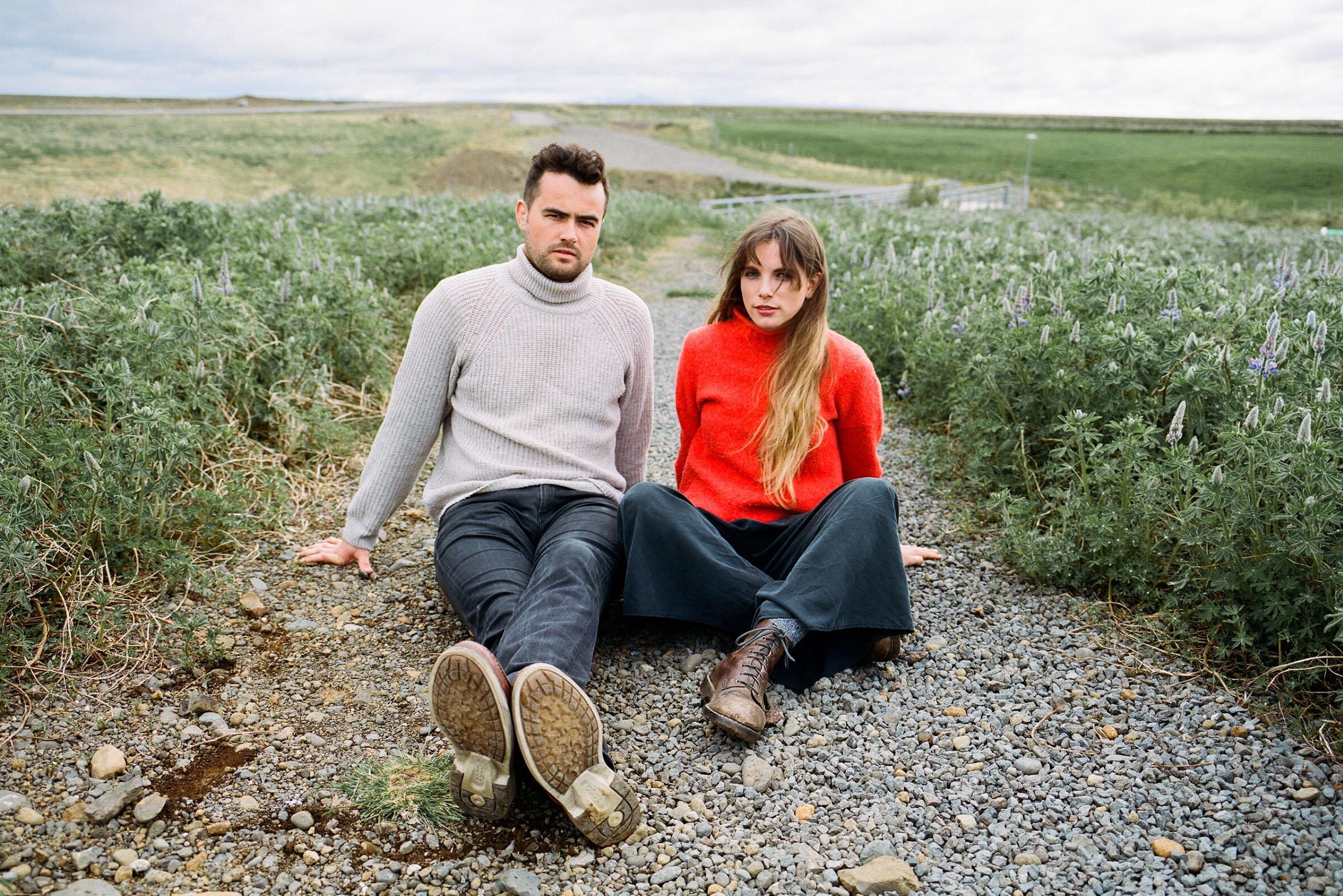 Ferris & Sylvester are at home in Streatham, catching up on some much-needed downtime between playing weekend slots at music festivals. “On Tuesday and Wednesday we’re here, then we’re off to a festival for the weekend until Monday,” Sylvester explains. “But at least
with this you can come back home and put your feet up for a few days. When you’re touring it’s very different.”

Having both moved to London to pursue a career as musicians, Archie Ferris and Issy Sylvester started playing together after they were introduced by a mutual friend. Since they started recording together the duo have released several tight, well-crafted singles, tinged with elements of country. Their music is rich and textured, and often sees the two singers trading lines and sendoffs. They attribute much of their craftsmanship to a shared affection for Simon and Garfunkel, as well as a lot of the music they inherited from their parents when they were growing up. “Paul Simon’s composition is stunning,” enthuses Ferris. “He’s probably one of the best songwriters on earth.”

Although they’ve now played countless shows across the country and as far afield as Texas USA, the duo still get pre-performance nerves before they go onstage. “We did a BBC Introducing set back in January and we were crazy nervous before that.” Says Sylvester. It clearly hasn’t gotten in the way of their touring: the band have several live shows lined up for September and October, including a set at the Green Door Store on Thurs 19 Sept. Ferris & Sylvester have previously played in Brighton on several occasions, with one of their most memorable performances at last year’s The Great Escape.

“That was our first proper gig together and it ended up being a big mess.” Laughs Sylvester. “It turned out we were just playing in the street and we had no PA – we had to borrow one from the nearest pub.” In the face of a slew of complications the duo managed to attract a crowd of 200 people, only to be shut down by the police. “That was probably one of our top five worst gigs.” Ferris agrees, but adds that although they had an ordeal last time, their return to this year’s The Great Escape was one of their best shows so far. “It all came together really well, which was significant to us. It felt like we’d worked really hard to get a slot, so it was rewarding to have this big turnout.”

Although they’re a relatively new act the band sound polished and competent, something they attribute to their collaborative approach to songwriting. “We try to listen to different styles of music outside of our core influences,” says Sylvester. “That’s definitely important for coming up with new ideas.” She describes their songwriting as a constantly changing process. “More recently we’ve been writing while we’ve been on the road, or recording song demos in hotel rooms. Sometimes Archie will be mixing in the car on the way to a concert.” Ferris notes that other songwriting duos who have influenced the band take a strict approach to putting material together. “With a band like Squeeze, Chris Diffford wrote the lyrics and Glenn Tilbrook was in charge of the melody. Obviously, each band takes their own approach, but we’ve always been conscious not to limit that in our songwriting.”

As both were solo musicians before they met, the songwriting process can sometimes feel like an artistic tug of war when it comes to deciding on a bridge or a hook. Ferris acknowledges that this isn’t the easiest way to write a song, but feels it’s important not to compromise. “We’ll often have two very different ideas for the same section, on which neither of us want to back down. Eventually we’ll go back to the drawing board and come up with a third idea, which is the one we’ll go with.” He laughs. “It can take a while.” Sylvester agrees that they argue a lot over how their material is put together, but thinks the finished product is worth the journey. “It’s about working hard to create something good. We’ve always been conscious not to limit our songwriting.”