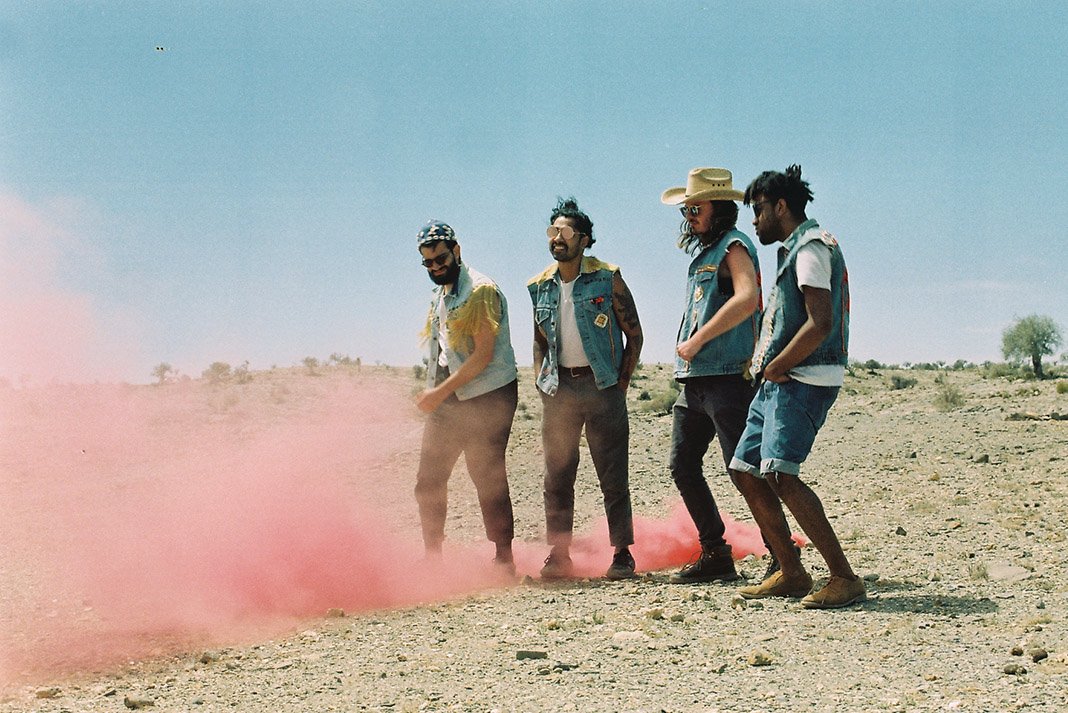 “I’ll let you listen, it sounds a bit crazy,” says Kamaal Rasool, founder of otherworldly alternative rock band Flamingods. He trails off, as he holds the phone towards the enormous burst of energetic sound from their rehearsal room in Kamaal’s garden. The band are getting geared up for the release of their fourth record, with a sequence of shows to follow including Brighton & Hove’s The Great Escape.

For Flamingods, rehearsing and composing in the same room are now cherished moments together. Originally from Bahrain, changes in UK governmental visa laws meant Kamaal had to leave London after his studies in 2014. Flamingods’ last two records were written and recorded over the Internet with the band members in different corners of the world (predominantly Dubai and London). “It was a very long process and it created a lot of tension in the band because it’s quite hard to explain yourself, like, trying to write an album over email.” Kamaal suggests having these challenges helped them grow as every band member could tap into their own ideas and realise the albums’ potential.

Despite now being able to play together, Kamaal makes it clear their newest album, Levitation, still faced its own difficulties. “We had a few tragedies happen while we were writing the record, so we were trying to take all that stuff and soak it in as much positivity as we could. Trying to get uplifting lyrics matched with euphoric instrumentation – that was our main goal for the LP.” The foreign sounds on Club Coco, the third of their new singles, certainly oozes the band’s zeal for travelling.

Flamingods’ mutual appreciation for touring means they acquire intriguing new instruments along the way. After spending time gigging in Turkey last year, they fell in love with the Saz, the country’s native guitar. Kamaal tells me the new album also features the Taishogoto, a Japanese stringed instrument, which they bowed to create a harsh violin-like sound. “We could capture a real Middle Eastern sound, because khaliji music is very string heavy and none of us play strings.”

Khaliji, a contemporary Arabic style ubiquitous throughout Kamaal’s youth in Bahrain, has formed an integral part of the band’s sound. “My dad would be driving me to school pumping out Khaliji classics and I just hated it. There was nothing about it that I liked.” He tells me it wasn’t until he was older when he realised how beautiful this music was, making him think of his home. These influences paired with Kamaal’s eclectic taste make it difficult to pinpoint Flamingods as one solid music genre.

When he moved to the UK for university, his eardrums were exposed to the music he once read about in magazines like Low Down and Uncut. “You can imagine, 18 years of just wanting to go to gigs and never being able to – it’s quite a long time. When I finally moved to London, I went to a show every week.” He remembers seeing mind- blowing performances from Iggy Pop, The Boredoms and Konono N1 at All Tomorrow’s Parties festival he attended with Charles and Sam from the band. That weekend, the boys were exposed to live performances that would slowly turn into big influencers for them.

After two packed out shows in 2017, Flamingods will return to this year’s The Great Escape festival amid their album tour. “There’s a fun energy at The Great Escape where everyone is quite excited about everything, it’s nice to be around. As a music fan, it’s so intense because you’re seeing so many bands from different genres.” Flamingods’ international psychedelic sound will certainly be an unmissable experience in Brighton this May.

Flamingods will play The Great Escape Festival on Sat 11 May. Their album, Levitation, is out on Fri 3 May on Moshi Moshi Records.