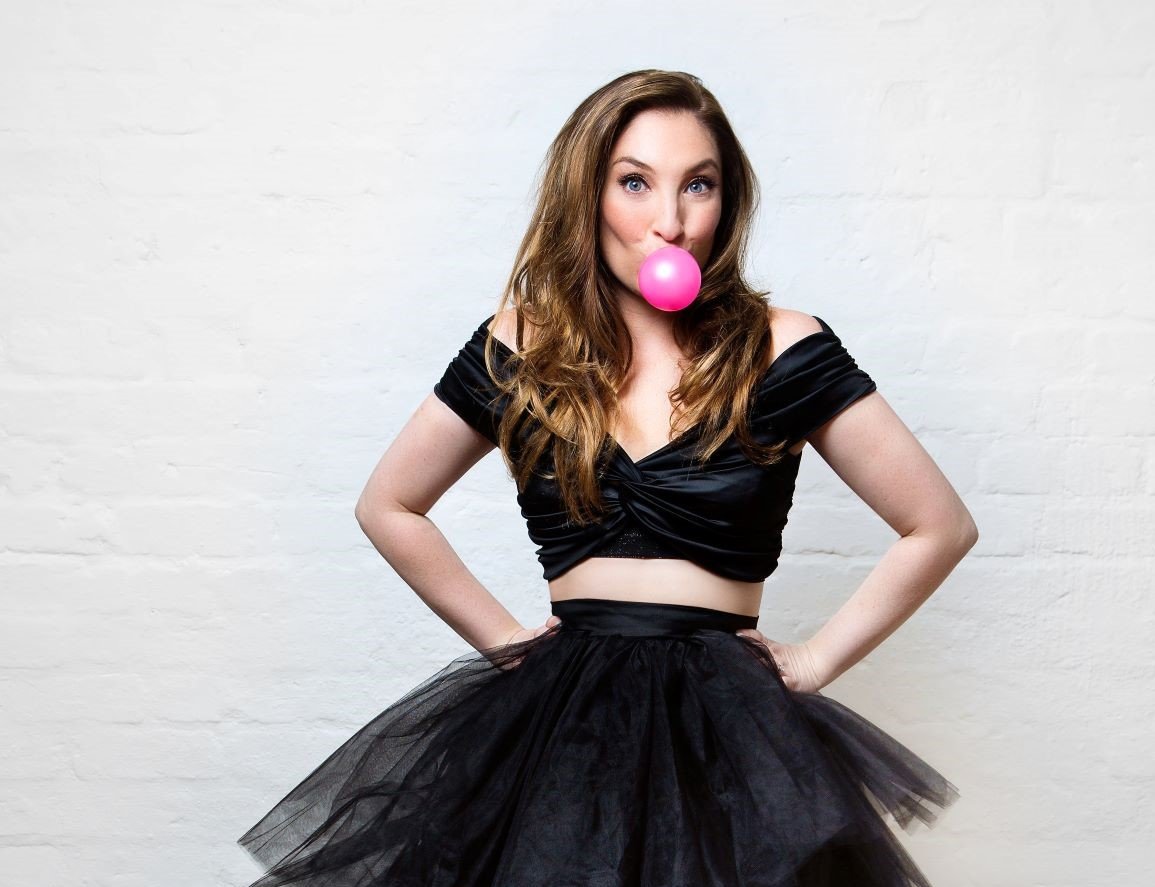 While 2020 has been tough going for Jess Robinson, it’s also offered quite a few triumphs. With a second season of her quirky and energetic Stars In Their Ears podcast winning fans around the world, and a leading role in the reboot of acclaimed TV satire Spitting Image, this Hove resident is setting out her pitch as one of the UK’s leading impressionists.

It might have been so different. Originally training as a classical singer, she saw her future lying with musical theatre. Taking a year out from studying to perform in The Rise and Fall of Little Voice, where she performed in the style of Judy Garland, Billie Holiday and Marlene Dietrich, she took a gamble on a particular audition. “I found out Dead Ringers were looking for impressionists,” she tells me. “I applied, saying I was really good, without thinking about the consequences.” Presented with a call-up for the enormously popular BBC TV show, Robinson found herself in the position of having to quickly learn a new skill.

Signed up for Dead Ringers’ final two series, the experience definitively changed her life. “I think I would have been miserable as a classical singer. That lie 100% started my career path. I never meant to be an impressionist.” Since then she’s worked her magic throughout TV and radio, including stints with Newsjack, Headcases, The Impressions Show with Culshaw and Stephenson and Horrible Histories, along with a touring production of The Rise and Fall of Little Voice.

During this time, she also toured her own live shows, a frenetic mix of stand-up, impersonations and music, which led to her competing in 2017’s Britain’s Got Talent. Progressing to the live semi-finals, where she ultimately finished fifth, Robinson says she entered the process with a little naivety. “I thought: ‘They’re the experts, I’ll do what they say as they just want the best for me.” What the show presented to millions of viewers was perhaps a bit more mainstream than she anticipated. But any regrets are overshadowed by the massive platform on weekend primetime that it offered her.

Just as Britain’s national Covid lockdown started, Robinson’s father passed away. “It was hideous and awful. After the funeral I just needed a focus.” Seeking solace in her work, she realised her plans for a musical comedy podcast. There had been long-standing plans to do this with her live band, Jessington World Of Adventures – “Americans just don’t get that. But it’s all part of the joy!” – but getting a group of jobbing musicians together is always problematic. Suddenly they all had time in their diaries. “We just threw ourselves into it, with half a plan. What manifested was a series of uproarious half-hour shows, based around a fantastical theme, impressions and a musical turn from a diverse range of guests.

It’s a canny choice of guests which really drives Stars In Their Ears’ gleefully bizarre vaudevillian chat-show format. “Every celebrity we’ve worked with has been such a good sport. We just want a huge mix of diverse voices. The common denominator is that they’re up for a bit of fun.” Over two series, it’s already attracted Stephen K Amos, Ellie Taylor, Al Murray, Rachel Parris, Rosie Jones and Gareth Malone.

Embracing the idea of pretending to be on a pirate ship or the world of Starlight Express, celebrities get impersonation lessons and indulge in a raucous sing-off, along with gas, banter and some genuinely abstract oddness. Perhaps it’s a glimpse inside her mind. Robinson has an infectious giggle, and a beguiling enthusiasm for what she’s doing, which inarguably rubs off on her guests. One highlight, so far, has been Romesh Ranganathan discussing how he incessantly listened to hip-hop during childhood, this passion endowing a youthful sure-fire belief in his own MC skills. The realisation these dreams were over-ambitious didn’t prevent him from contributing a freestyle rap to a version of Old McDonald Had A Farm to the podcast, though. “We manage to recreate celebrities, through my voice, singing things you’d never heard before, but also get actual celebrities singing things you’d never hear before. Or again, I think Romesh might say.”

These are available through portals like Apple Podcasts and Anchor.FM, with fabulous exclusive content available through Patreon. Stars In their Ears’ freewheeling festoonery of gags and impressions creates a robustly informal atmosphere, often charming guests into revealing hidden truths. Stephen K Amos was particularly open about his childhood, and how he’s often been judged for his accent and ethnicity. “When he was growing up, in a predominantly white school, he pretended to all his school-friends and teachers that his mum was Shirley Bassey so he could be associated with an acceptable person of colour at the time. Isn’t that crazy?”

“It’s really interesting to talk to people about how they were brought up, how their parents spoke, how it’s shifted, and how most people have become chameleons to fit in with different social groups.” While the podcast didn’t start with the intention of dealing with serious issues, it has created an occasionally silly space to genuinely find out about a celebrity’s voice, their motivations and how self-aware they are. “It is a melting pot. You can just about forgive all the bum and willy jokes, if we then ask an intelligent question about their lives.”

One episode with Athena Kugblenu brought up a discussion around appropriation, prompted by Robinson’s portrayals of Beyonce and Nicky Minaj coming up during a past press interview. “She said: ‘As long as you don’t do it in blackface, you’ll be fine.’ I think you have to tread carefully. I don’t know if people would ask that question or not.” She didn’t realise how much she’d enjoy the interview strand of the podcast though, explaining much of her questioning comes from a place of being naïve, curious and with an eagerness to hear opinions on certain subjects.

While the bulk of guests work within the comedy industry, Stars in Their Ears is attracting an increasingly diverse gamut of guests. Many are people Robinson knows or has worked with, while others are brought in through hard work on social media. “For Gareth Malone I slid into his DMs and just pestered him.” She admits she’s got plenty of hustle or ‘chutzpah’, as some of her family might say.

When Gareth Malone appeared on the podcast, he suggested most great singers will break into song as they go about their normal day. Which raises the question if Robinson gets the occasional intrusive impression. “I’ll be chatting with my husband, about something like taking the car in for an MOT, and he’ll just have to go: ‘Can I stop you there, Jess? You’re doing a voice.’ We’ve just celebrated our one-year anniversary, and I think he’s realised he married about a 100 hundred women that day. And they all have opinions.” There’s no denying her impressions come from a place of love for their subjects. She still runs all of her impressions past her mother, so there’s likely to be little place for malice or controversy.

Along with the podcast and her touring show, the cementing of her reputation as one of the country’s leading impressionists came this year with a lead role in Britbox’s reboot of Spitting Image. “It does seem like the pinnacle of an impressionist’s career.” Combining cutting-edge puppet work, vigorous caricature, impressions and current affairs, it pulled in 15 million viewers at the peak of its original 12-year run. TV’s most popular satirical show, its list of luminaries includes the cream of British comedy talent from the subsequent quarter century. Rory Bremner, Hugh Dennis, Harry Enfield, Alistair McGowan, John Sessions, Debra Stephenson, Chris Barrie, Jon Culshaw, Doug Naylor, Ben Elton, Andy Parsons, Richard Curtis, Ian Hislop, Steve Coogan and Stewart Lee helped lampoon politicians, royalty and celebrities. There’s been little like it since, and now seems a good time for a revival.

A new era has brought new subjects. Robinson has found herself voicing people like Adele, Ivanka Trump, Angela Merkel, Taylor Swift, Kim Kardashian and Greta Thunberg. “I’ve spent quite a long time with these people,” she tells me, incessantly researching each one for their diction and idiosyncrasies. One revelation in the process was Greta Thunberg. “All I knew of her was this serious young girl activist, but doing some research into her, I’ve developed a little bit of a girl-crush. Myself, at that age, I was just lighting candles and playing Coldplay in my bedroom. I was just not interested in anything outside of my window, let alone the environment.” For a variety of reasons, there was some concern over how the show might depict the teenage environmental activist. But the character has been treated with a lot of love and respect, portraying her as a suburban teenager who is distracted from the climate emergency by increasingly ridiculous situations – like West Ham United’s lacklustre on-pitch performance.

Although not as vicious as its previous incarnation, the show still acts as a moral resistance to the ridiculousness of modern society. Robinson’s Jacinda Ardern is offered as a Kiwi Mary Poppins, while her Ivanka Trump is suddenly a social pariah who can’t get a restaurant table anymore. “My dad would have been amazingly proud of the show, because he loved watching it.” As ever, it remains breathtakingly contemporary, reacting to the week’s news stories, while playing on familiar perceptions. Reborn into a world where little is shocking, but plenty is offensive, Spitting Image is doing an admirable job of navigating a very narrow middle ground.

With this under her belt, along with revealing bold new entertainment territory with Stars In Their Ears, Robinson says 2020 has been one of her favourite years. “Despite losing my dad, who was my best friend ever, this awful pandemic and all the stress that came with it, there’s been some beautiful things which have happened.”

Jess Robinson stars in Spitting Image, which available to stream now on: www.britbox.co.uk

Seasons 1 & 2 of her Stars In Their Eyes podcast are available now. For more details, visit: jessrobinson.co.uk