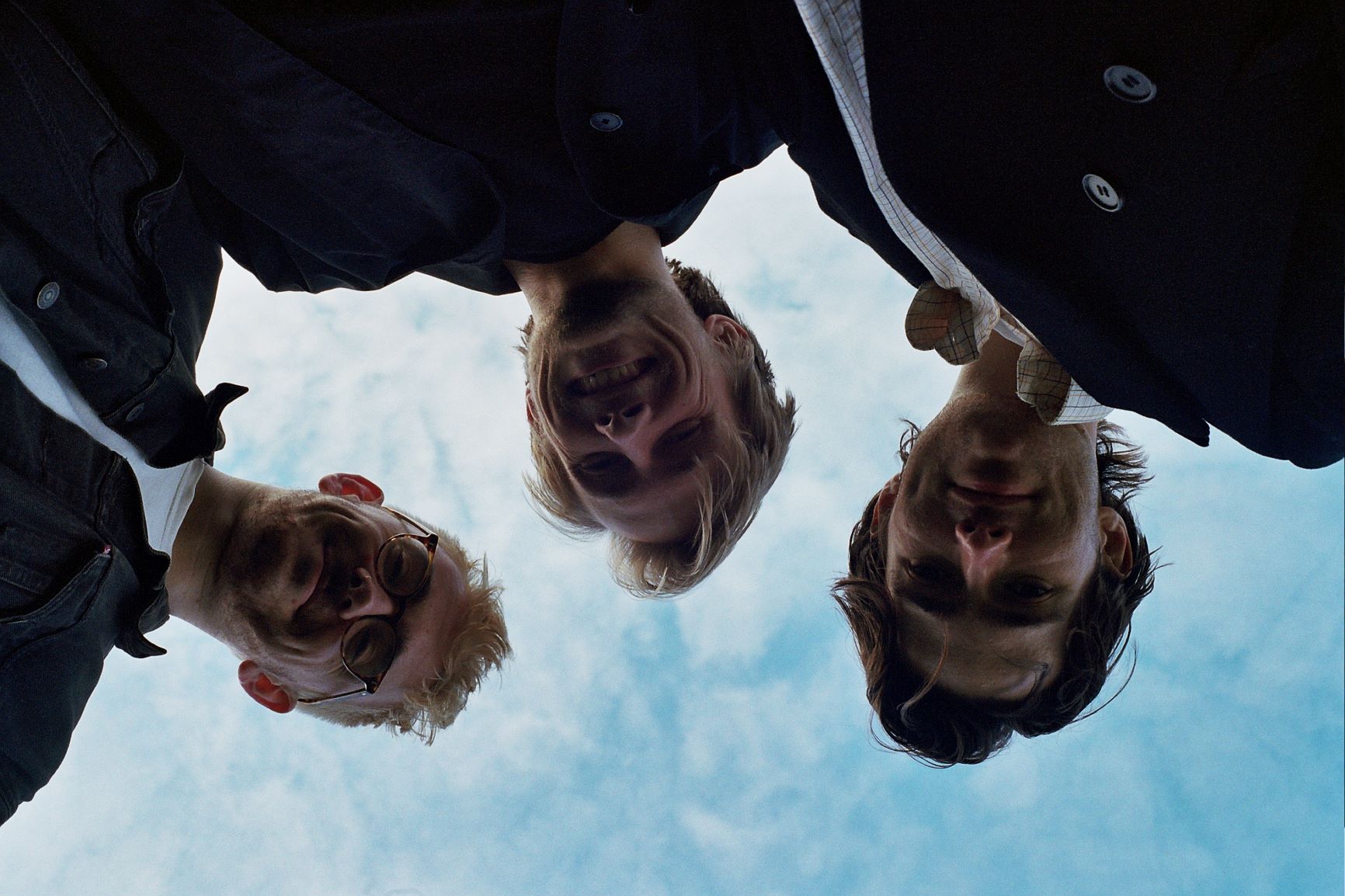 Murmur emerged out of Brighton in 2016, immediately noticeable for their atmospheric, melodic grunge, razor sharp songwriting focus and captivating live show. In 2018 they streamlined operations becoming a three piece and in 2019 released their infectiously catchy single ‘Cradle’. Their latest single ‘Shame’ is an energetic production that reveals a band capable of real emotional nuance and sonic imagination.

Tell me about the musical makeup of ‘Shame’, the drum sound is incredible!

George: We wanted to experiment, so when we got in the studio we just started setting up drums in the vocal booth.
Jack: Everyone who records at Brighton Electric sets up in the big room for that big drum sound. It was our producer Alex Gordon’s idea to try the vocal booth, avoid the old Vox AC30 setup and all the other great amps there and use a crappy Peavy Bandit. We wanted to force ourselves out of our comfort zone, which was so much more rewarding.

Your producer Alex is also a good friend – is that dynamic important to you?

George: Alex is as keen to produce music as detached from the normal way of doing things as we are. He also has the same level of excitement as us about this project. He quite often comes into rehearsals when he’s working at Electric and just listens in for a while. It’s a privilege to have that relationship where we’re all developing together, always pre-prodding, sharing voice memos… We don’t have to be polite, no feelings get hurt, I can be annoyingly persistent and I think being able to be annoying is important.

Lyrically, who are you speaking to on ‘Shame’?

George: Myself. It’s about the realisation you’ve been putting up a front, not really wanting to be vulnerable around friends and feeling guilty for offloading at the same time. It all spawned from a conversation I had with my Dad about feeling older and responsibility. The second verse is a rant about how I used to deal with that, and how once you start talking about vulnerability and insecurity, it becomes apparent how relatable your own situation is. Openness is an asset to friendship.

You featured in the Caitlin Moran biopic ‘How to Build a Girl’ as the Manic Street Preachers. What was it like being a band on a film set?

Ben: Absolutely loved it. It was the best. We were up there with Sick Joy too who were also in it, just having a laugh for three days.
George: Going up to a film set, getting dressed up with a load of fake tan, laughing at each other, spending a day pretending to be Manic Street Preachers with a white Les Paul… It was amazing.
Jack: When we were kids they were one of those important bands for us – I remember playing along to VHS recordings of them at Glastonbury – so it was a pretty weird moment.
B: I wasn’t allowed to wear my glasses all day, so I couldn’t see anything, and at one point I was feeling my way to the toilet and walked straight into Paddy Considine. I was like ‘Sorry mate!’ and he said ‘Yeah, you will be.’ I think he was joking!

You formed initially as a four piece and ‘Shame’ is your second venture as a three piece. It’s a popular lineup in Brighton, what is it about being in a three piece?

George: In a three piece every part has to have a purpose, no playing for the sake of playing. When we were a four piece it was about fitting around each other, now we’re more concise. If there’s no need for me to detail anything I wont, so it’s far more energy driven. That’s something we loved about the recording process of ‘Shame’ – it was recorded very close to when we wrote it, so all the energy and excitement was still there.

How much do you think you’re actually influenced by the Brighton scene, and the guitar music it’s known for?

George: It’s the songwriting here that gives me a buzz and it’s nice to be a part of a scene that admires songwriting. But I don’t actually listen to a lot of the kind of music we play. The kind of guitar music I love is Last Shadow Puppets and Scott Walker. It’s still classified as guitar music but there are also those big cinematic moments. We might not pull a lot of surface inspiration from those acts, but melodically and as songwriters we do.

Can you pinpoint the bands you fell in love with early on that are still present in Murmur’s sound?

Ben: Black Rebel Motorcycle Club are a big one, George and I grew up listening to them. I think I was 15 when I heard the album ‘Baby 81’, and I just thought ‘I need to start learning to play properly.’
George: I never paid much attention to the songwriting there, it was more about the energy and the subculture they inhabited. Another record one of my Dad’s mates showed me was Killing Joke’s ‘Total Invasion’. They’re a band from the late 80s that used to be very spacious and political, and then evolved into a monster of a band. That industrial guitar chugging along, loads of chorus, rolling bass, and the front man’s got his face paint and shell suit looking like he’s about to explode. I loved that. And obviously a band like Radiohead is an important one, ‘Kid A’ was a big thing for me and my songwriting – realising you could structure music in that way. I love that a band like that is still very spontaneous and careless about how they’re perceived. Johnny Greenwood hasn’t changed his backline in years and those sounds of glitching and cutting out, the old Telecaster he still plays, that’s timeless.
Jack: There’s an integrity there that you don’t get with a lot of other big bands. Like 70’s acts who had their 10 years of success then just did reunion tours. Radiohead have been going 30 years and they’re still grounded. There aren’t any ‘personalities’ in that band.

Finally, if money were no object, where would Murmur record their debut album?

Jack: La Frette. It’s a Victorian mansion near Paris where Idles and Arctic Monkeys both did their last records, Nick Cave did an album with Warran Ellis there…
George: High ceilings, fancy lamps with nice trim, big gates and stained glass windows… if you wanted somewhere to immerse yourself artistically, you could really hide out there.
Jack: And the control room’s in the wine cellar.