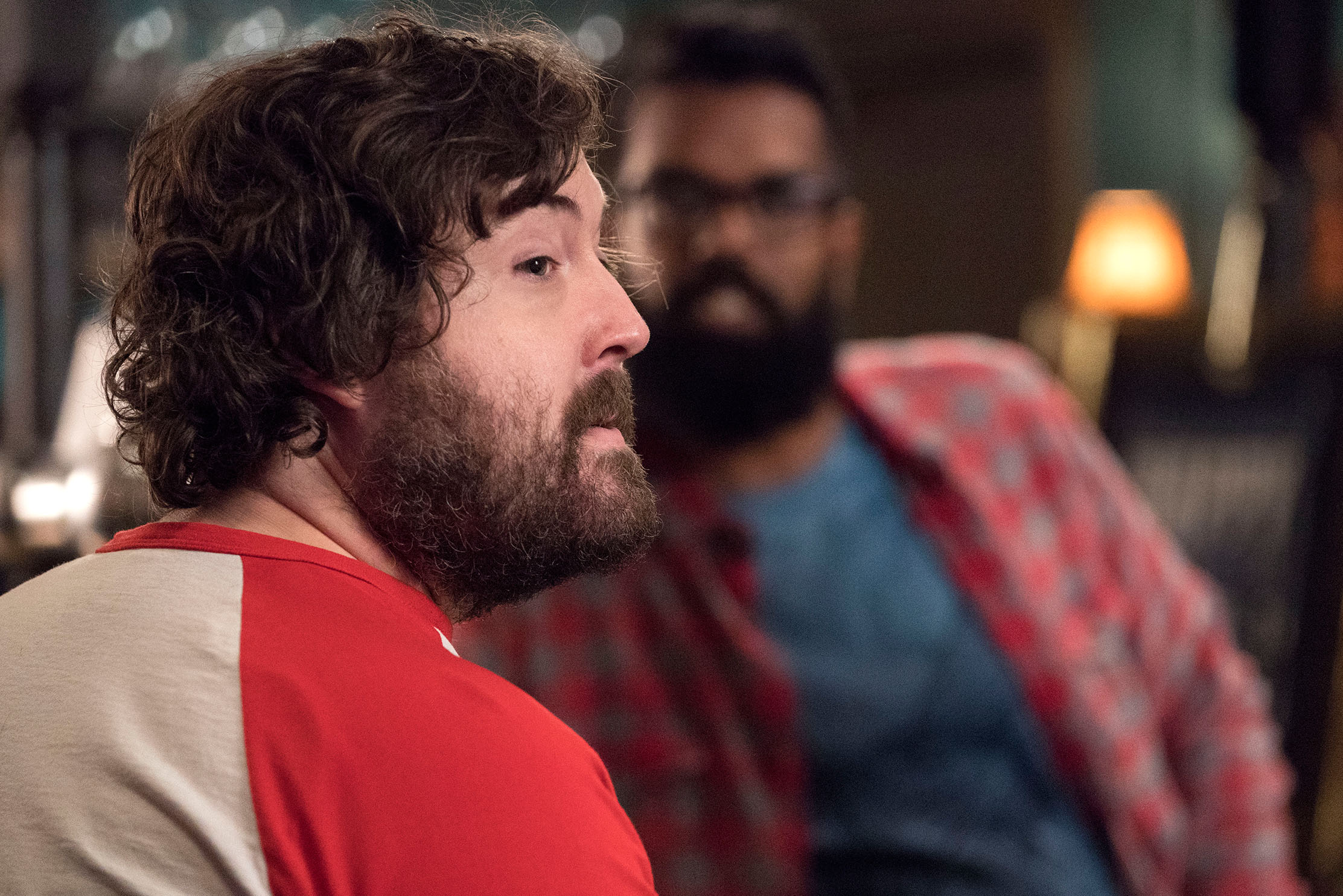 Why do comedians invent a persona for stage that is so different from who they are in reality?

Currently performing at the Edinburgh Fringe for the first time in six years with his show Phoenix from the Flames, Nick Helm is known for shouting at his audience until they are forced into participation, performing original rock songs and sweating profusely. Suffice to say, I was apprehensive to interview him about the second series of The Reluctant Landlord (in which he plays pub regular, Lemon), I didn’t particularly want to get shouted at down the phone. Helm, however, was softly-spoken, patient and well… non-threatening.

He’s still in Edinburgh but apparently having a lovely Fringe and both of his shows – he’s also performing his B-Musical I Think, You Stink with Jenny Bede, Sooz Kempner and Rob Kemp – are going better than he anticipated. The audience often gets side-tracked by Helm’s horse ragged voice (maybe the quietness is actually preservation) that the depth behind his words is lost. Phoenix, is a more obviously introspective show focussing on mental health and depression but in a non-sentimental, high energy, celebratory way. By ‘high energy’ I am assuming he means ‘high volume’. Helm is aware that although yes, he suffers with depression he does in fact, have a very good life at the moment and he didn’t want this show to “victimise the protagonist… that can feel a bit self-serving y’know” as he tactfully remarked about some other comedians’ shows, which he did not name.

Mental health and self-care go hand in hand and Helm seems to have got his coping strategies aligned at the moment. First priority: not getting into situations that would be too stressful for him (he’s doing two shows a day which sounds stressful to me… but alright) and of course, surrounding himself with good people. Working collaboratively helps ease the anxiety, if I Stink doesn’t go well – “Not that we have bad shows” – the weight of it isn’t on his shoulders alone. He’s also surprisingly gushy about Romesh Ranganathan who I think Helm would have happily spoken about for the entire interview. From the sounds of it, Ranganathan doesn’t stop for a break between writing The Reluctant Landlord, acting, editing, holidaying with his family and then performing stand-up.

Maybe it’s this dedication to the craft that makes the sitcom comical whilst being miserably realistic. Helm had so much faith in his buddy that he didn’t even read the script before starting series one. “The opportunity arose on Thursday and I said, ‘Yeah I’ll do it!’ and they were like great, start on Monday. So for the entire first series, I kept thinking ‘Oh bloody hell, they could fire me at any time’, because I had no idea what I was doing.” With a background in acting, starring in the BBC Three sitcom Uncle and a BAFTA-nominated short, Elephant, Helm seems to be undermining his own capabilities here. Apparently, self-deprecation isn’t reserved for the stage persona. He allows that he felt a lot more prepared for series two and is sure that it will be better than the first. There was a small fangirl moment over the cast – “[Sian Gibson] is just incredible … Yazmin is brilliant … Marek just makes me cry with laughter” – it’s nice knowing they all get on well outside of Romesh’s fictional pub.

“If you get bored of one thing, you can do something else!” he jokes when I ask which he prefers, stand-up or telly. It makes me think, what else will Helm try his hand at? He could easily replace Carr on Cats Does Countdown or read a six-year-old a bedtime tale on Cbeebies. He is, to the last, an oxymoron. When I questioned his choice of desert island disc this soft sleepy voice replied: “Alice Cooper’s Last Temptations. Or Jackrabbit Slim by Steve Forbert!” Errrrr okay then. You do you, Nick. You do you.