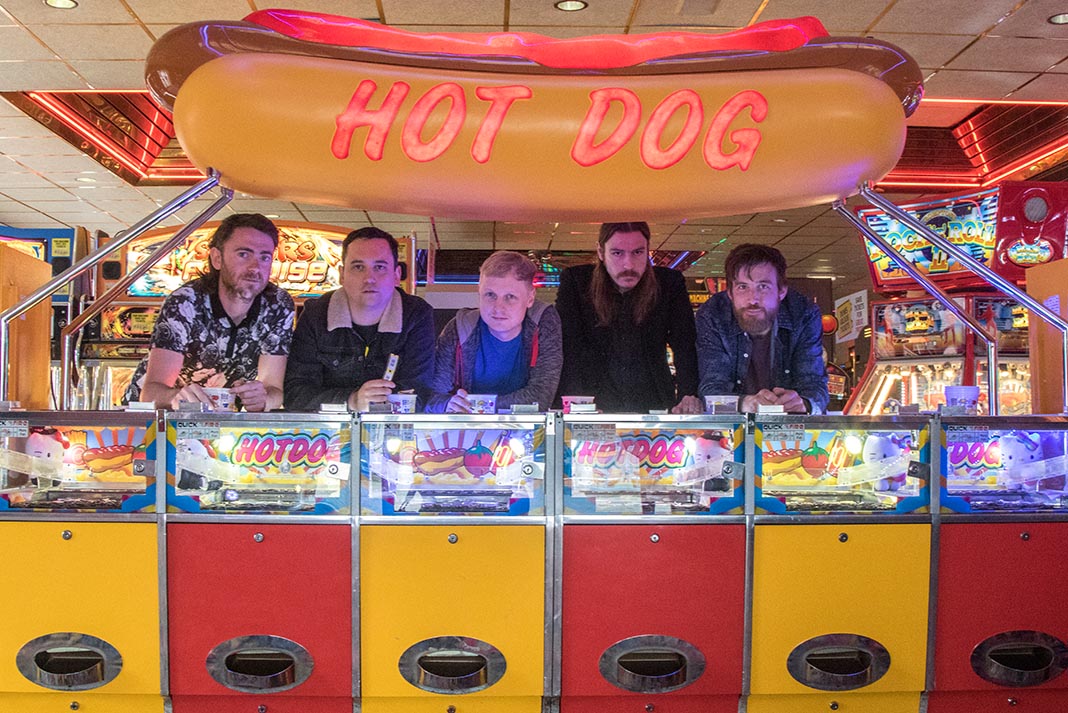 There’s a strong craving in the air for heavy guitar riffs and menacing vocals in live music, with Pigs Pigs Pigs Pigs Pigs Pigs Pigs creeping to the forefront of this mainstream resurgence. The Newcastle-upon-Tyne rock outfit seems to have engrossed our attention in more ways than one. Matt Baty, the band’s vocalist, assures me there was no moment of euphoria behind their disturbing name. Although, he still remembers conceiving the idea years ago with Johnny, the band’s bassist, during a bad day in the studio predating Pigs. “We knew it would look absurd on posters, so we just went with it. It certainly is funny seeing it on festival line-ups taking up a whole row.”

Their name is undeniably obnoxious. I decide not to admit I wasted my time wondering if there was any connection to the number ‘seven’ and the seven deadly sins, the thematic focus of their second record they released last August. It’s effective because it’s meaningless.

The foundations of this album, King of Cowards, came together accidentally when a few gig dates in Italy were cancelled on their tour of mainland Europe. Seizing the opportunity to stay in a remote location in the Italian countryside, they utilised this time to flesh out rough track ideas and finish writing the record. “It was absolute magic to focus on it and feel energised by it,” Matt explained how rare this moment of inspiring serenity in Italy was. Back in Newcastle, the boys are busy with day jobs and so often can’t get into the practice room until the evening for very little time.

Despite the huge success of the record, Pigs initially never set out with intentions to record their music. For the first four years, all they craved was live performance.

They grasped any chance they could to support bands, which often meant a six-hour drive to London quite early on in their career. “That did benefit us in a way. It made recording the first album super simple, but it also meant that that album was supercharged and full of energy.”

Their vigour on stage transfers well to the airwaves of Radio 6 Music, with the station playlisting three of their singles from their album. Pigs were also selected to play a huge slot at 6 Music’s annual festival, this year in Liverpool, of which Matt was immensely grateful for. “The evidence of the support they’ve leant us has been tangible. All of a sudden, our live shows were all selling out and I have no doubt that’s down to the 6 Music support.” The quintet has been moved by the wealth of positivity towards their sound when meeting fans at the merch stand before and after their gigs. “It’s quite heartwarming because it shows if certain heavy bands are put in front of a wider audience there’s still a real thirst and hunger to enjoy that music.”

The BN1 Magazine Stage at The Great Escape 2017

Touring has been an instrumental but effortless component to the band’s success. As I speak with Matt, he has had just a few days rest after Pigs’ almost sold out UK Spring tour. Following their insane show at Brighton venue, The Haunt, the band is eager to kick- start the summer shows at The Great Escape festival this May. “There are different mannerisms in different cities, and some places stick out in my mind. There’s a very particular audience and a very particular character to them as well. Brighton is always the one I look forward to playing because of that.”