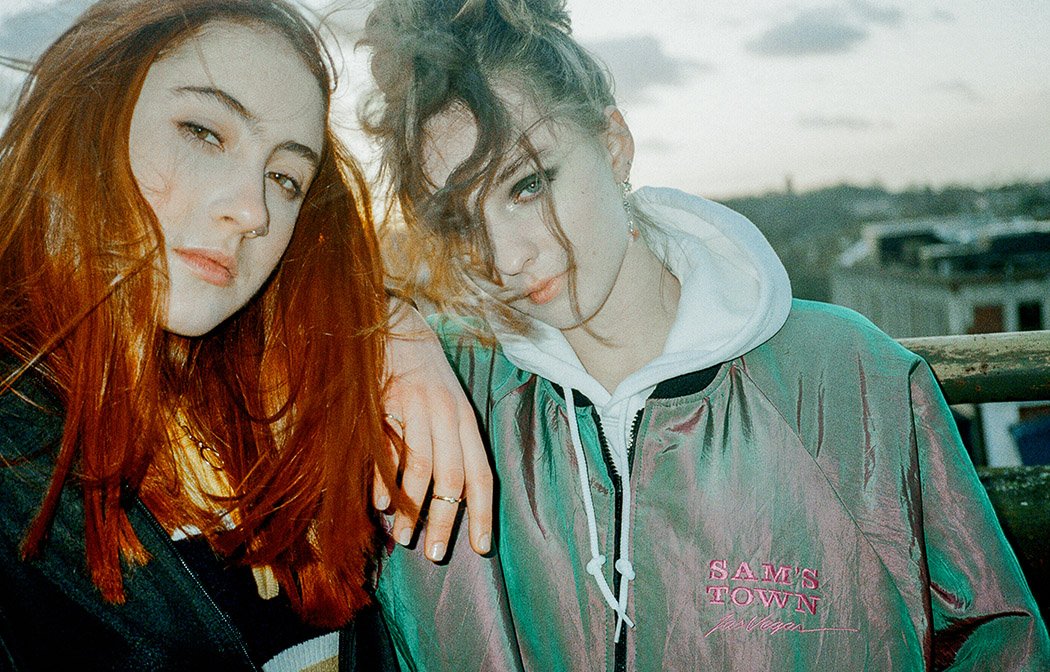 Norwich born art-pop duo Let’s Eat Grandma have been inseparable since they met in reception class of primary school, being best friends for almost their whole life. When they released their first album, I, Gemini, Rosa Walton and Jenny Hollingworth were only aged 16 and 17. Now, aged 18 and 19, they are more vocal and experimental with their songwriting. Two singles off of their next full length, I’m All Ears (out Fri 29 June) have already been released, Falling Into Me and Hot Pink. The latter sees a collaboration with rising LA producer SOPHIE and also adopts the songwriting skills of Faris Badwan, formerly of The Horrors. We caught up with the girls earlier this month to talk new music, skateboarding and tour shenanigans.

“I think that we have taken more of an interest in music technology and software on this album,” Hollingworth states, “There is more of that influence found on our newer tracks. During the first album, we didn’t really know much about it. We wrote everything that we could physically play, all at once. The new record doesn’t have that limiting factor, we have been able to write on our laptop as we go and it has opened up a lot more doors to different kinds of sounds that we can create.”

When chatting to us, the girls would naturally finish each other’s sentences, as if they were of the same mind. Although young, both spoke with a sense of professionalism whilst also displaying unique attitudes towards their current position. Walton explained: “When we wrote the debut, we didn’t really know that we were actually making an album as we were just writing tracks.” Hollingworth then added: “Writing the new material has been really enjoyable, challenging at times but very rewarding. Doing collaborations was definitely an interesting change for us.”

“I think that we know what we want with our music now, we have more to say.” Walton states. Referring to the lyrical themes found on Hot Pink, she says: “It’s about gender, a song celebrating feminism.” In their second LP, Let’s Eat Grandma take pride in their improved lyrical capabilities. Hollingworth mentioned, “A lot of the songs are more personal this time around and the lyrics are more open, we’ve put ourselves out there a bit more. I think that it is an emotional album lyrically whilst simultaneously being sonically bold. If you listen to Hot Pink, a lot of the lyrics, especially in Rosa’s beginning section are quite emotionally vulnerable.”

Tour life has been interesting for them, Walton highlighted her plans for in between the upcoming shows, “I just bought a skateboard! So our tour mission is to learn how to skate! That should be interesting.” However, touring isn’t always so fun, as Walton reminisced on a particular occasion in Belgium: “Our tour van got smashed up once in a warehouse when we were hanging out with some friends. Luckily, they fixed it for us which was nice of them. It could’ve been a nightmare.”

The band have been described as performing in an ethereal yet energetic fashion on stage. Hollingworth describes their performances as “more of a representation of how you are as a person.” She explains: “It’s that aspect of yourself that others may not see. It’s not like we have different characters on stage, it’s just who we are.” In regards to keeping up the energy for shows, Walton said: “We try not to drink alcohol on tour. We drink a lot of water, maybe do a little bit of yoga in the morning. Sometimes we are really exhausted an hour before the show and I think, “oh no, I couldn’t possibly do this”, but when you are on stage you get that crazy adrenaline from the crowd.”

Let’s Eat Grandma are set to play at The Great Escape festival this month in Brighton, they have fond memories of their past time in the city and are looking forward to their next performance, “It will be nice to go back with a new show, we played the year before last and feel as though we have it together more than last time.” The two recall their new show as: “Sleeker and more refined, we have rehearsed it a lot more, it is definitely going to be better.”

If the new tracks are anything to go by, Let’s Eat Grandma’s second release is absolutely living up to their own praise. The girls are on their way to greatness, and are set to take 2018 by storm. You can catch them live in Brighton at The Great Escape Festival this year.