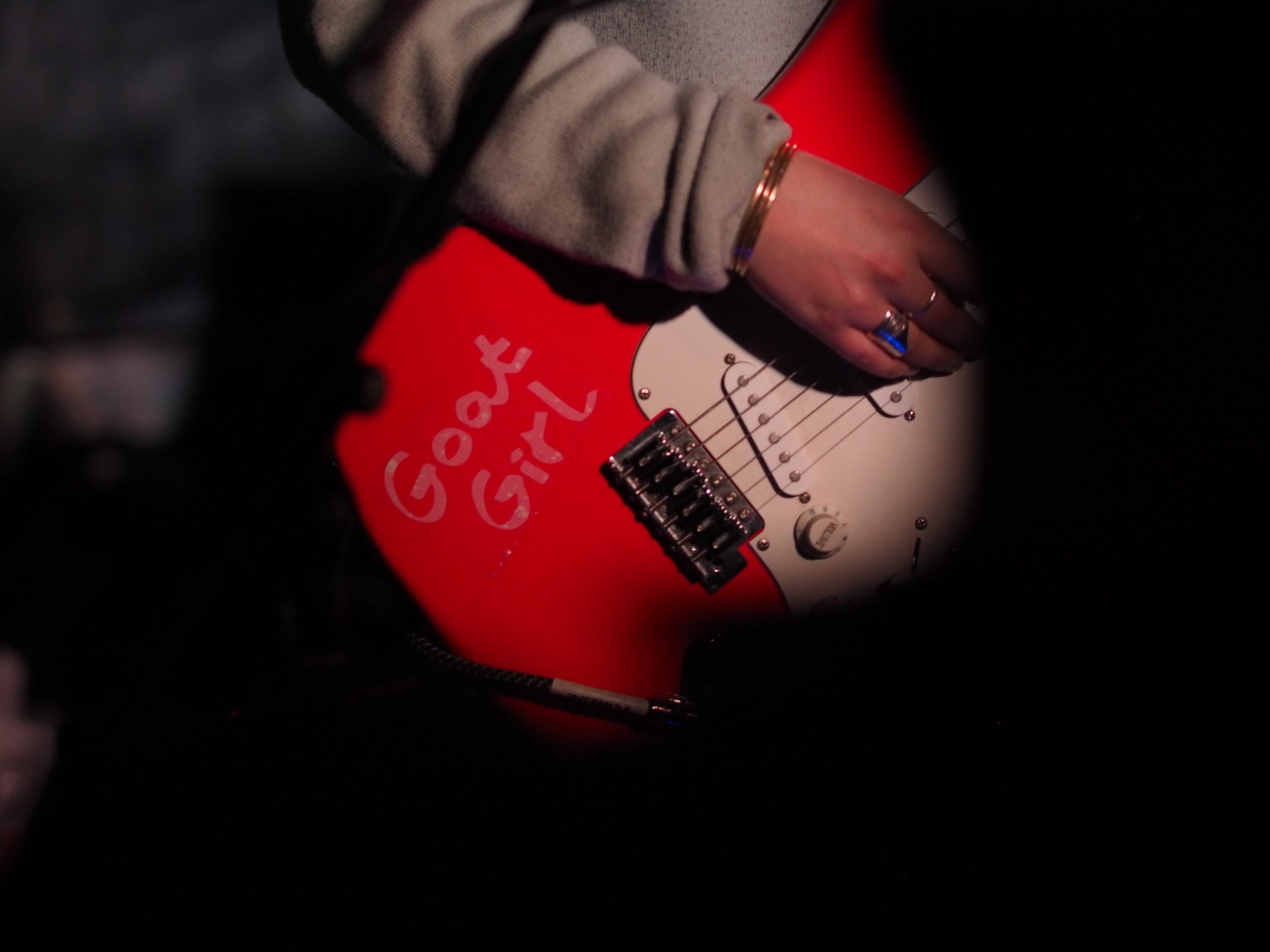 We caught up with Holly from Goat Girl on the adventurous palette behind their new album On All Fours, dumping your ego and why Goat Girl will never have any sonic limits.

What has the last year in Goat Girl been like?

On All Fours came out in January but we’ve been waiting quite a while for it to come out – we actually finished it 2019! Then the pandemic hit, so we’ve just been trying to follow the guidelines – we weren’t practising for quite a long time. It was kind of weird to come back and learn the songs again because we wrote it quite a long time ago and we’d never performed any of the tracks live, so it felt quite fresh for us. It was quite fun to go through that process of figuring out how to execute it live, especially because we’d gone in deep with synths and electronics on the new record.

We did some socially distanced shows in May which were seated and we put a lot of time over lockdown into thinking about how we could make the live show more exciting. We had our friend Flo White do set design for us. It was really nice performing those shows as a seated concert too – we had Lottie’s Dad playing viola, our friend Charlie who played trumpet and our friend Alex played flute. We spent a lot of energy on that. I think it was filmed so it’s going to be part of a documentary we’ve made about the making of On All Fours. 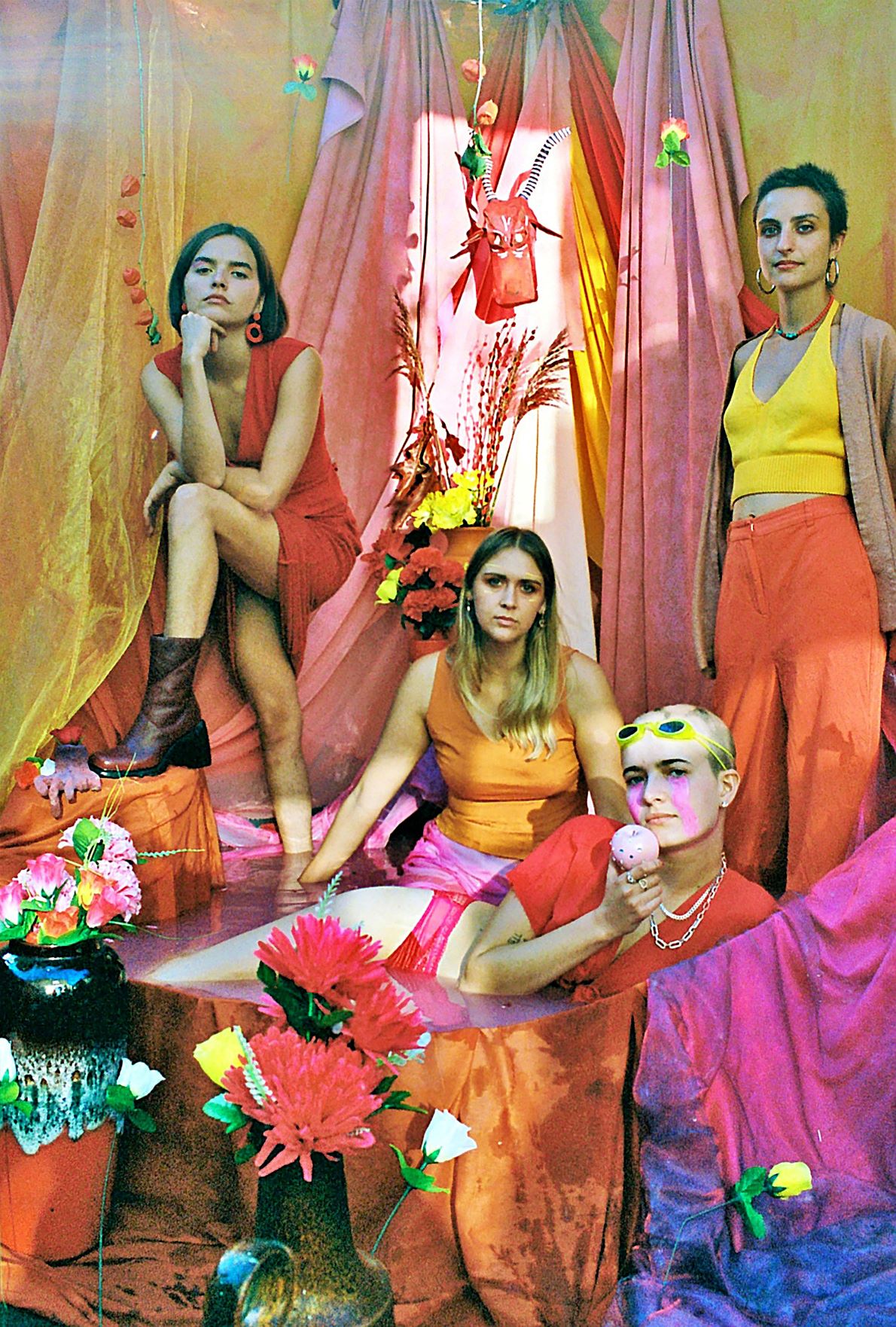 I really like the lo-fi electronica going on across On All Fours. Is that something that turned up on the record like icing at the end of recording or did you write the record with those instruments very present?

So the first record I wasn’t on, but a lot of those songs were written predominantly by Lottie when she was quite young. It was all recorded live and very raw, not overthought, just played and done and it’s amazing. But this second record we started from scratch, I was a new member and we were just getting to know each other musically. We were just jamming the whole time and so when I turned up to jam I just brought some synths along and we were all taking turns playing them.

When we were writing we were all playing different instruments actually. People were fed up of playing the same thing for years so we made it an open space to try things out. Rosie’s an incredible keyboard player, I can play a bit of drums, Lottie’s great at bass, L.E’s great at keys and I had those synths from the beginning. So I think basically there was always someone playing keys when we were writing, and it became very much integral. The modular synths and weird noises came in later.

Are there any influences on this album that might surprise listeners?

Yeah maybe! There are some really weird, really stupid influences that I think came through when we were writing and jamming. We went to a farm – this place called the Yoghurt Rooms in East Grinstead – for a week. We took all our stuff down in a van and just set up and played non stop for a week, living together and eating and drinking together. So probably one of the weird influences is Star Wars, because there was no internet – just a TV with a DVD player – and we just watched all of the Star Wars films. So maybe there’s a sci-fi element!?

But then there are some nice obvious influences. Broadcast is definitely an important one for the sounds on this record. Lottie and I are really into Blond Redhead. Els is really into a lot of jazz music and soul. Also soundtracks, we wanted to incorporate the kind of strings you hear on the Under the Skin soundtrack.

Are there other sounds you’d like to explore on future releases?

All of them! We’re just very open to trying lots of things and trying to keep our minds open. None of us feel like Goat Girl has to sound this way or that way. We’ve worked on jams that are quite grungy, or doomy, but there’s others that are like soulful pop songs. Nothing’s off limits for us. But we’d love to soundtrack a film – do something deranged for a horror film.

I saw you published the Goat Girl Manifesto! Is there a particular part you like? I love ‘Dump the Ego’.

That came out of nowhere from a Wetransfer project, but I’m really glad that we did it. Toby Evans – who did the artwork for the record – and his brother Aiden did the artwork and really brought it to life. It was really good to be asked about that stuff and think about it. We picked two points each and collaborated on the final two.

Dumping Your Ego was one of mine. You kind of just have to. Egos are just the source of so many problems in this world in my opinion and sometimes it’s really hard to separate yourself from it and listen to other people, really listen. People’s ideas aren’t necessarily a tax on your own ideas. Our band is collaborative in that way – we write together, there’s no hierarchy and we all respect each other and give each other time. It is hard because it takes longer sometimes. You have to hash things out and four people have to be happy with every single thing but it’s so worth it in the end because you come out with something you’re all really proud of, something we all feel really united about.

I think it doesn’t just apply to writing music either. I think the idea of dumping your ego applies to everything. It’s been a bit of a revelation to me in the last year to be conscious of that. If I’m starting to feel a bit defensive or negative, I try to think, why is that? Do I need to feel like that? Can I learn from this? It’s a hard process and I’m still learning all the time, but I think it’s a really important thing to do to progress and live a more balanced life.

I think you can hear that in the music – there’s something quite considered about the record.

This record did take us a long time, we really do care about it a lot and we did think about it a lot. In the end we needed to be pushed into recording it because we could have been analysing it forever. I think it was the right time and it worked out in the end.

Finally, what new bands are you listening to right now?

I’ve actually got a spreadsheet of new artists! I write for a music blog so I’m actually listening to new music all the time! It’s called the ‘mostradicalist’ and we only cover songs that are three days old or less at the time. I’ve been doing it for about 4 years, I’m the editor now and it gets me through being in a band in these times!