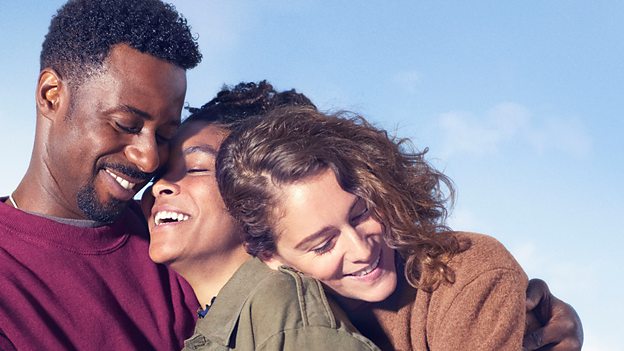 Ok, when I saw the title of the BBC3 Drama ‘Trigonometry’ I developed dampness on my brow. The word flings one back to nightmarish memories of the school classroom. Remember that spotlight illuminating your desk while the macabre shadow of a teacher who resembles a Hitchcock villain demands to know what sine, cosine and tangent means in front of an audience of your peers? Maths is fun Jeannie, she says but it sounds more like a threat as she stares at you with one of several green eyes. And then half an hour later when your workbook is still blank she opens up her oesophagus and swallows you whole. Perhaps my hatred of Maths is a bit dramatic but you can imagine my relief when I found out that Trigonometry, the BBC series, was about the relationship between a couple living in London who accept a new lodger and all three of them fall in love with each other.

So, likeable and or believable characters? Tick. Gemma and Kieran have been in a long term relationship, she’s trying to set up a café next to their flat and he’s a paramedic. Their relationship is not lacklustre. In the opening scenes Kieran is seen racing home to be with Gemma who is on the phone to him whilst trying to watch porn on a laptop which keeps crashing, a poignant example of a woman’s ability to multitask as I’m sure you will agree…The chemistry between Thalissa Teixeira who plays Gemma and Gary Carr who plays Kieran establishes an excellent depiction of young people living in London and immediately immerses us in their world. However, perhaps they are too convincing. The character who alters everything for the pair is their new lodger ‘Ray’ or Ramona. She is French, why they would need any more information than this to fall in love with her I don’t know. However, what also emerges is that she’s a retired Olympic synchronised swimmer. Her parents were obviously instrumental in pushing her forward to succeed but she feels her total focus on her career has wasted her life…so she’s talented and also a victim. She’s pretty but not an intimidating way because of her goofiness. Eugh, there’s no green light for us to hate her for changing Gemma and Kieran’s relationship and that’s the problem.

So, stakes constantly being risen to a dramatic climax? Cross. The trouble as I said is that Gemma and Kieran are too convincing as a couple, there’s no major flaw in their relationship for Ray to fill. Why would we want her to? There is obviously an attraction between the three of them but this is emphasised between Gemma and Ray, a fact which isn’t really acknowledged, rather than between Ray and Kieran. Gemma and Ray share a couple of scenes filled with albeit brief but charged touches, whereas Kieran and Ray just seem to go swimming a few times together and now are also in love. It makes the story seem less believable. Additionally, there’s no villain for us to hate between the three of them and it is something that is really needed to accelerate and create more drama for us as an audience. They’re just all happy and because they’re loveable characters I think we are expected to root for them to stay together when their loved ones raise doubts about their polyamorous relationship. However, as a society where monogamy is hardwired into us as being the norm I don’t know how the writer can expect us to want to be on Kieran, Gemma and Ray’s side. I mean what would their ship name even be? Kaymma? Ridiculous. However, the programme was quite refreshing to watch in the sense that there were no needless or overtly provocative sex scenes. The story seemed to be a genuine exploration of how people can feel about each other rather than a drama simply aimed to titillate. Despite this, the subversion of the plot being one in which the characters get what they want instead of what they need makes the ending feel a bit dull. This is disappointing because of the incredible acting and glittering wit which is masterfully weaved throughout the script.