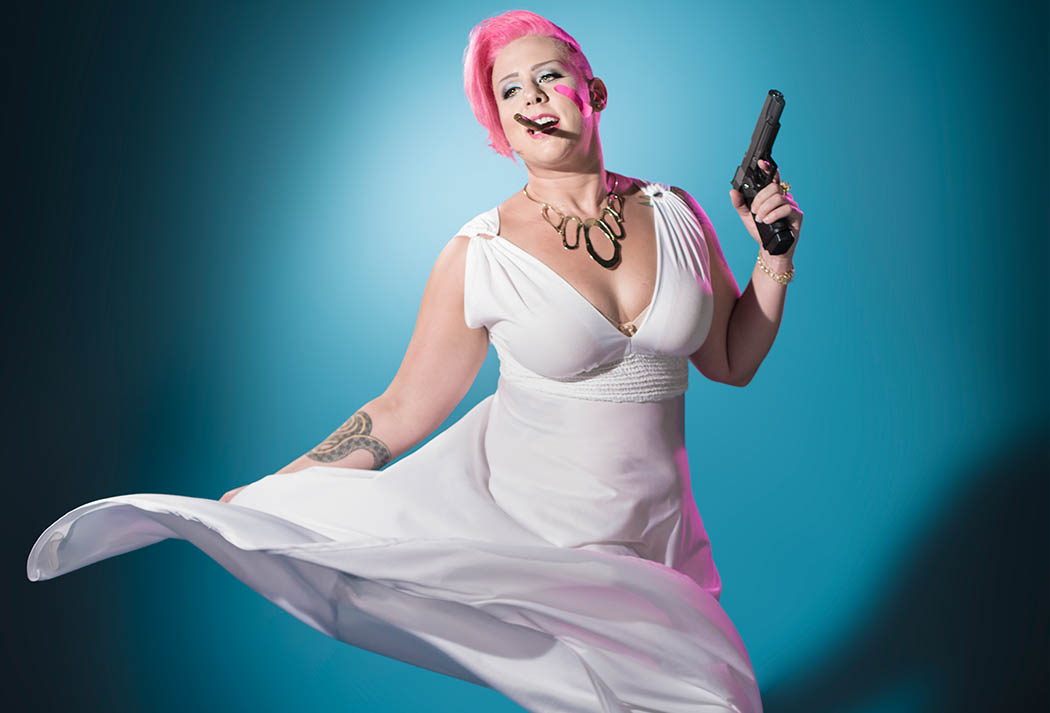 Growing up in mid-West America, before moving to New York and then London, with her pink hair and tattoos, Abigoliah Schamaun challenges everything about her conservative upbringing and British reserve. Now she brings her hilarious and critically-acclaimed show, Do You Know Who I Think I Am?, to Brighton’s Komedia on Weds 23 Oct.

It seems like she’s almost figured it all out. A former yoga instructor with surprisingly squishy thighs who identifies as heteronormative disguised as a luscious lady lover, Abigoliah is a myriad of paradoxes and nothing is what it seems. So who is Abigoliah Schamaun? Who does she think she is? That’s simple. She’s the greatest comedian you’ve ever seen.

Currently on a huge UK tour, her new show takes the audience a series of gags and anecdotes, bound together with three simple answers – how to fix the gun problem of home-country America, the differences between male and female personal grooming, how to repurpose offensive words and make them great again and how she has the campest boyfriend ever. Nothing is off limits and everything is touched on with a wry smile and tongue firmly in cheek.

BN1 caught up with Abigoliah, to squeeze a few more answers from her, and find out what it’s a great time to be alive.

Are you still making audiences get some exercise at your shows?

Lol. Nope. I had people up and exercising in my 2017 show, NAMASTE BITCHES, a show about fitness cults, drugs and musicals. But I haven’t since then. My current fitness level doesn’t allow me to open with enthusiastic Burpees and then having the lung capacity to deliver an hour of comedy. So my current show is one where the audience can sit and laugh with no surprise yoga class in the middle.

What can you tell me about Do You Know Who I Think I Am!?

DO YOU KNOW WHO I THINK I AM!? Is a show where I poke fun at people’s reactions and expects of me as an American, who has short pink hair and a lot of chutzpah. People assume a lot about a person based on looks. Sometimes they’re right. Usually they’re wrong. And I like to play with that. 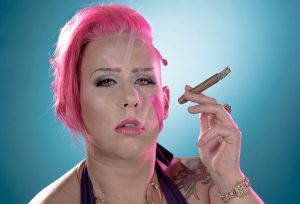 Is comedy an under-valued weapon?

I don’t think so.

It’s a magical thing bringing strangers together to laugh in the dark about one common theme. And in my experience that phenomenon gets the respect it deserves.

I don’t use comedy to change people’s minds. I use it to invite laughter. If someone thinks differently after a show, cool. But I think those instances are few and far between. Comedy is for laughter first everything else second.

Have you found enlightenment yet, or is it a life-long path?

Nope. I probably never will. I’m not sure we’re meant to. I’ll continue search though. I love a quest. And even though I haven’t reach Nirvana I can say I’m happier than I’ve ever been.

Do you think you are calming down, or have we just seen the lull before the storm?

Calming down from what? No one’s ever said I’m “calming down”. Most of me and my boyfriend’s conversations are him instructing me TO calm down.

You’ve lived in London for a while now, have you learnt to stand on the correct side of the underground’s escalators yet?

Yes, you learn that on your first day. Otherwise you’re trampled in the first week. But you guys HAVE escalators! What a luxury! Most subway platforms don’t, also The Tube has cushioned seats, the Subway has plastic.

I feel like a Fairy Queen on the Tube with its cushy thrones and moving staircases. What a time to be alive!

Do you ever get homesick? The bland food and chaotic weather in Britain can drive some Americans a little ‘stir-crazy’.

No. I’m happier here than I was in The States. I’ve got amazing friends, a supportive partner, and a great career here. If I moved back to The States I might manage two of those things but I don’t think I’d have all three.

If you could ‘Freaky Friday’ with a famous person, and inhabit their body for a day, who would you swap with and what would you do?

Helen Mirren. In her films she’s gotten to wear a crown in some and wield a gun in others. She’s a no-holds bar force of nature who’s hilarious. She gets down in the trenches covered in mud but still remains soooooooooo classy.

Abigoliah Schamaun takes her show Do You Know Who I Think I Am? to Brighton’s Komedia on Weds 23 Oct 2019