by Stuart Rolt
in COMEDY
0

There was a heated discussion at BN1 about how posh Al Murray is. His best-loved character, The Pub Landlord, is an enraged and bitter individual. Framed squarely as a ‘Little England’ caricature, he roams the stage brandishing a pint and a bewildered attitude. He redraws some long-established stereotypes, along with challenging our notions of class, but has courted several misconceptions along the way. “If you look at Wikipedia; you’d assume I was wearing a top hat,” he tells me. “In my family, there’s no one like Jacob Rees-Mogg. There’s no one like Boris Johnson. My dad worked for British Rail his entire career, basically as a civil servant. I’m a comedian. We’re generally downwardly mobile. We’ve made ourselves less posh.” There are still people on the internet who’d have you believe he’s a remainder to the Barony of Strange, although Murray asserts he has no idea what that might mean. 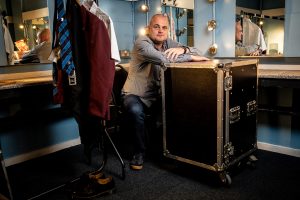 Legendary rock singer Ian Dury suggested if you’re in show business you’ve exited the traditional systems. You’re then in arts and crafts, so separate from class. “People use it to explain things. Especially politically… If posh people are bad, then by any measure Jeremy Corbyn and the people around him are posh. The generalisation survives reality.” It amazes him that people obsess over certain details. True or not, information lands on websites, and people believe it offers greater insight into someone’s personality. Even having two middle names can draw judgement.

The Pub Landlord has championed the British sense of superiority for 25 years. He was originally conceived to fill a ten-minute gap in a show, but saw instant success. Archetypes are powerful things in culture, and audiences instantly understood what Murray was aiming for. A quarter of a century on and the attitudes inspiring this misanthropic buffoon are even more visible. “There’s always been British exceptionalism in every walk of life, on the left and the right. You look at the Brown years, and he was talking about how we need to lead Europe. You’d be going: ‘Why? What is this obsession with leading everything?’” Only ten years ago, people suggested the Pub Landlord material was irrelevant. But in 2019, public figures are espousing similar rhetoric without any sense of irony. “It’s been there a long time, ticking under in our culture. Some seem innocuous, and some are quite toxic. It’s a brilliant time to be doing the act, because THIS is the subject. I almost don’t need the character to talk about it.” Somehow, he’s managed to remain relevant, despite real-life events threatening to overshadow his gleeful absurdity.

His work has never been a platform to spread a message, but more a vehicle for examining attitudes in society. It’s part of a comic tradition, where terrible things are presented then deconstructed. “You can’t not run the risk of being misunderstood. Because if you’re not, it’s obviously not an effective piece of satire.” He reveals a distaste for the growing distrust of expert opinion. From political punditry to celebrity dance competitions, conflated public feeling is taking precedence over experience and evidence. It’s an understandable consequence of the desire to democratise everything or let anyone have a go. “It’s interesting on these shows when people boo. There are judges, who are experts, saying: ‘Actually that Pasodoble wasn’t very good.’ And you boo them… What are you actually doing? You’re rejecting expertise, saying you know better and everyone needs to be nice… In an environment where that’s impossible.” He offers that nothing exists in isolation. Things like this feed into each other, and reflect a wider attitude across the nation.

The Pub Landlord himself has become an unlikely national institution. Although Murray laughs when the character’s elevated status is brought up. “It’s very odd. I always thought if you stick around long enough, you’ll become part of the furniture. That’s always been my game plan!” Some still conclude he genuinely runs a public house. Although a more mind-bending misconception is the character provides an outlet for his true feelings. “That’s kind of amazing, because it credits me with more deviousness and guile than I possess. Why the fucking hell would you bother? As a way to drive yourself nuts, that would be the best.”

During the 2015 election, Murray ran for Parliament in South Thanet. Some people believed he was David Cameron’s cousin and put up by the former PM to spoil the chances of fellow candidate Nigel Farage. “On a simple basic factual level, I’m not related to him. What was interesting, was how that happened so readily.” It was a warning sign of what was coming. We live in an age where facts are invented to fit personal narratives. Even sensible people were questioning his electoral motives, refusing to believe he was simply having a laugh. Rumours circulated saying the BBC had paid him to run, or that he was taking orders from the European Union.

“I was told it was unfair on UKIP voters, because I was going to confuse them – by UKIP supporters. I just thought: ‘Honestly, you don’t think much of them, do you?’” It prompts interesting discussion around democracy. Some suggest you shouldn’t stand as a candidate if not entirely serious, because it appears disrespectful. Conversely, our political system remains open to everyone, but there’s no compulsion to vote for anyone. “If you don’t like it, don’t vote for me,” he says with another chuckle. “It was a real window into how people think. Some people are determined to believe in conspiracy theories, and very often just can’t take the simplest explanation.”

If ever we were in need of some festive light relief, it is now. And one source of humour...

Brighton Dome is delighted to open its doors to spread some Christmas joy this December, with a series of...

Brighton Fringe is delighted to announce the first events of their new Autumn Season, running from Thurs 1 –...

A Student’s Guide to Safe Driving