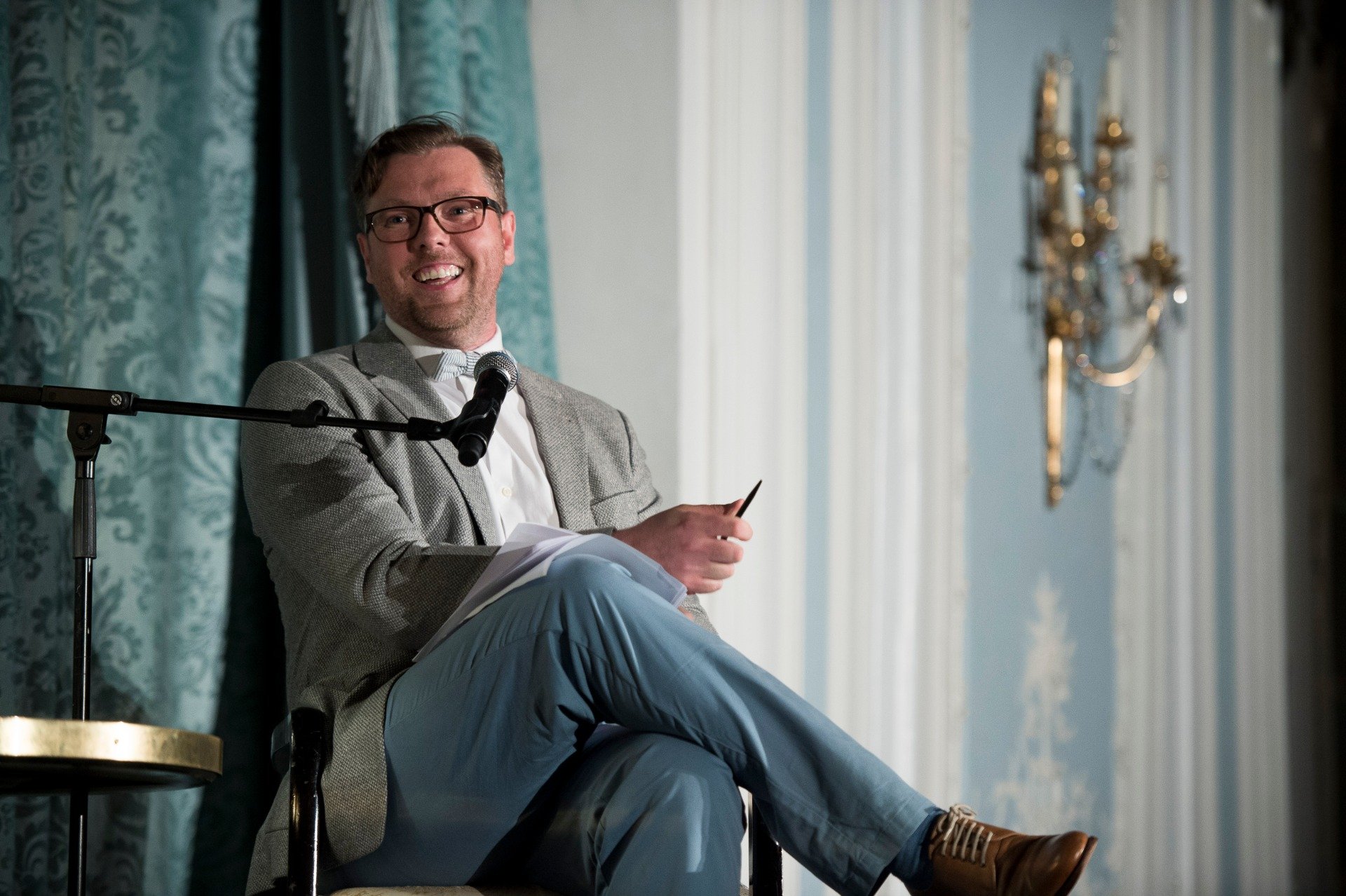 Glasgow-raised, Brighton-based, much-celebrated, further-hyphenated author, journalist, and presenter, Damian Barr is the author of the critically acclaimed (which is often a euphemism for high-brow and quite dull, but is most assuredly not in this case) memoir, Maggie & Me, about growing up in Glasgow, gay in a straight world, in Thatcher’s Britain and the aftermath of the IRA’s attempted assassination of the Iron Lady here in Brighton’s The Grand Hotel. 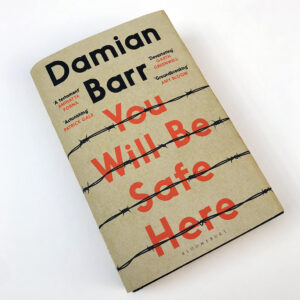 His latest book is the novel You Will Be Safe Here and is now available in paperback. The novel is based in South Africa, is set dually in 1900 and now, and seeks to uncover a hidden history. The first part of this eye-opening book is set in the Second Boer War and follows Sarah and her son as they are sent to a concentration camp at Bloemfontein, in the wake of the brutal adoption by Britain of scorched earth policy. “It takes you inside the tents, and to this place where she’s got to fight to survive.” The second and contemporary part features a boy called Willem who, “like me,” Damian tells me, “prefers books to football.” Worried that he is growing up too effeminate, he is sent off to another kind of camp: called New Dawn, they promise to “make men out of boys.”

Willem’s story, and in turn the book as a whole, was partly inspired by the harrowing case of Raymond Buys who, after a troubled childhood, in January 2011, at the age of 15, was enrolled at Echo Wild Game Rangers camp to help get him back on the straight and narrow. Three months later, with unspeakable injuries, he was pronounced dead.

Researching those events for an article in the Guardian Damian spoke with Raymond’s mother, Wilna, who would subsequently be a great support for the writing of the book, gave permission for the book to be dedicated to Raymond (it is also dedicated to the women and children that died in 1900), and was invited by Damian to read the book before he published it, to ensure it felt emotionally true.

The book is a remarkable achievement. And clearly one of personal fulfilment, to bring these stories to the fore, to emphasise how history will repeat itself if we don’t learn from it. “I felt a moral and personal responsibility to share this hidden history, and uncover the story of what happens in these camps in South Africa, so that people can make better decisions, and not send their children to these places.”

And it was in South Africa that the author found himself when the recent lockdown was announced, concluding a worldwide promotional tour for the book. Getting one of the last flights out of the country and arriving home he realised how serious the situation was; “I definitely had a panic at the start of it, thinking ‘I hope everyone I know and love is going to be okay. What can I do to help my neighbours? What can I do to help my community?’ I like that it’s made me feel a wee bit more connected to the people more immediately around me.”

I asked how he’s found lockdown – has it been, like it has for many of us, a quieter time? Perhaps a chance to start on another book? “I’ve been incredibly busy!” he tells me. As well as You Will Be Safe Here being published in paperback, he made Shelf Isolation for the BBC in the first couple of weeks (recorded at home, he investigated what to read, watch and listen to in lockdown), he is soon to start filming a second series of The Big Scottish Book Club, he and his wonderful team at the much-loved Damian Barr’s Literary Salon (normally a live show with an audience) had to move online and, on the day we spoke, he’d just come from a meeting with an esteemed production team about a TV adaptation of Maggie & Me.

He assures me that, hidden away within all that activity, he loves to relax by grabbing a coffee from Small Batch in Seven Dials, going to the nearby crescent and sitting on the grass talking to friends. He also finds time to get out on his bike, up to Devil’s Dyke or over to Worthing, and will often swim in the sea. Confessing to him that I’d not been in the sea for over a year I was summarily instructed to “Get! In!”

Quickly changing the subject, I asked him more about his Literary Salon. For those who haven’t attended one, either in person, or online, the format sees authors invited to chat candidly with Damian about their new book, their processes and inspirations, and will answer questions from the audience (hands up when in real life, digitally sent in when online: anyone can ask anything) and normally read an extract or two from their work. For anyone with a passing interest in books or above, they are a must, and offer a real insight into the imaginations and workings of some of the most renowned literary minds around. And it is clearly something that Damian himself, an enthusiast for skilled writing before a purveyor of it, enjoys as much as the audience. “Getting to sit down and interview Yaa Gyasi, Diana Athill, David Nichols, Jojo Moyes, Naomi Alderman, all these amazing writers, that feeds me as a writer.”

Other notable authors that have jumped at the chance to be featured on the salon include historian Dame Mary Beard, writer, broadcaster, classicist and comedian (show off!) Natalie Haynes, author of the Tales of the City series, Armistead Maupin, Academy Award winning screenwriter, Dustin Lance Black, and Everything but the Girl frontwoman, Tracey Thorn.

As a live show previously held at the Brighton’s Theatre Royal and at the Savoy in London, the switch to online naturally provided challenges, but, with an optimism and cheerfulness that is as apparent over the phone as it is when presenting the salon, he sees the positive aspect of such a move, highlighting how it makes it accessible for many more people. And it is that type of positive outlook, coupled with the fantastic team he frequently praises, that ensures the salon will not just survive through the pandemic, but thrive. “People really need that right now; they really need that space… You might read a book on your own, but you share your love of books with other people, and that’s what we try and create, a space for that to happen.”

We spoke, also, of how lockdown and the pandemic have impacted Brighton as a whole. “Brighton has vulnerable communities, there are a lot of poor people and a lot of people with insecure housing and insecure work, like lots of people in the arts,” he told me. “One of the things that makes this city great is all that creativity, but that is an insecure sector and I think we need to get more support from central and local government, to make sure that people have what they need, so the city can stay as what it is.” Overall, again, he is optimistic, and focuses on how local businesses have adapted and supported each other through this alien time. “Seeing Brighton respond characteristically creatively has been really encouraging.”

So, what was it that brought him to Brighton in the first place? “Oh God, that’s so simple – queerness.” It was a place he felt safe to be himself. “I’d come here to do a school quiz when I was a teenager, and it was like ‘Oh my God, I’ve landed in the Emerald City.’  It was freedom. So that’s what got me here, and that’s what kept me here.”

Before asking a final, rather clichéd question, I thought I’d try a daft one and asked him which character from The Simpsons he’d be and why. “Ooh, that’s a very good question…” (Daftness vindicated.) “I mean it’s probably Lisa: nerdy, stubborn, worried about not fitting in…”

And so, onto my final question, one that I thought he might be bored of hearing, but one that he certainly didn’t give a boring answer to. If he had one top tip for aspiring writers, what would it be? “Stop calling yourself aspiring. You’re either a writer and you’re writing, or you’re not.”

And with that excellent advice, and simple nod to ambition and commitment, I think back to earlier in our long and extremely enjoyable chat: consequently, I’m now off to have a dip in the sea before I get in trouble.

Maggie & Me and You Will Be Safe Here are both widely available and highly recommended. 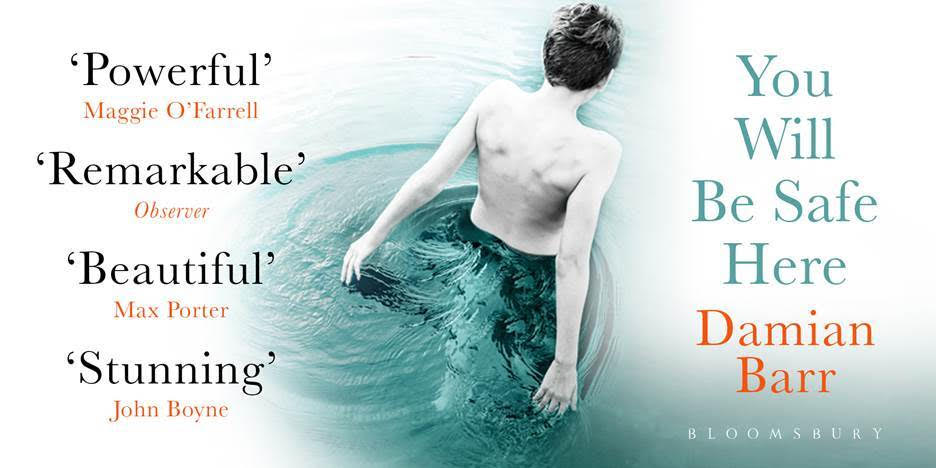