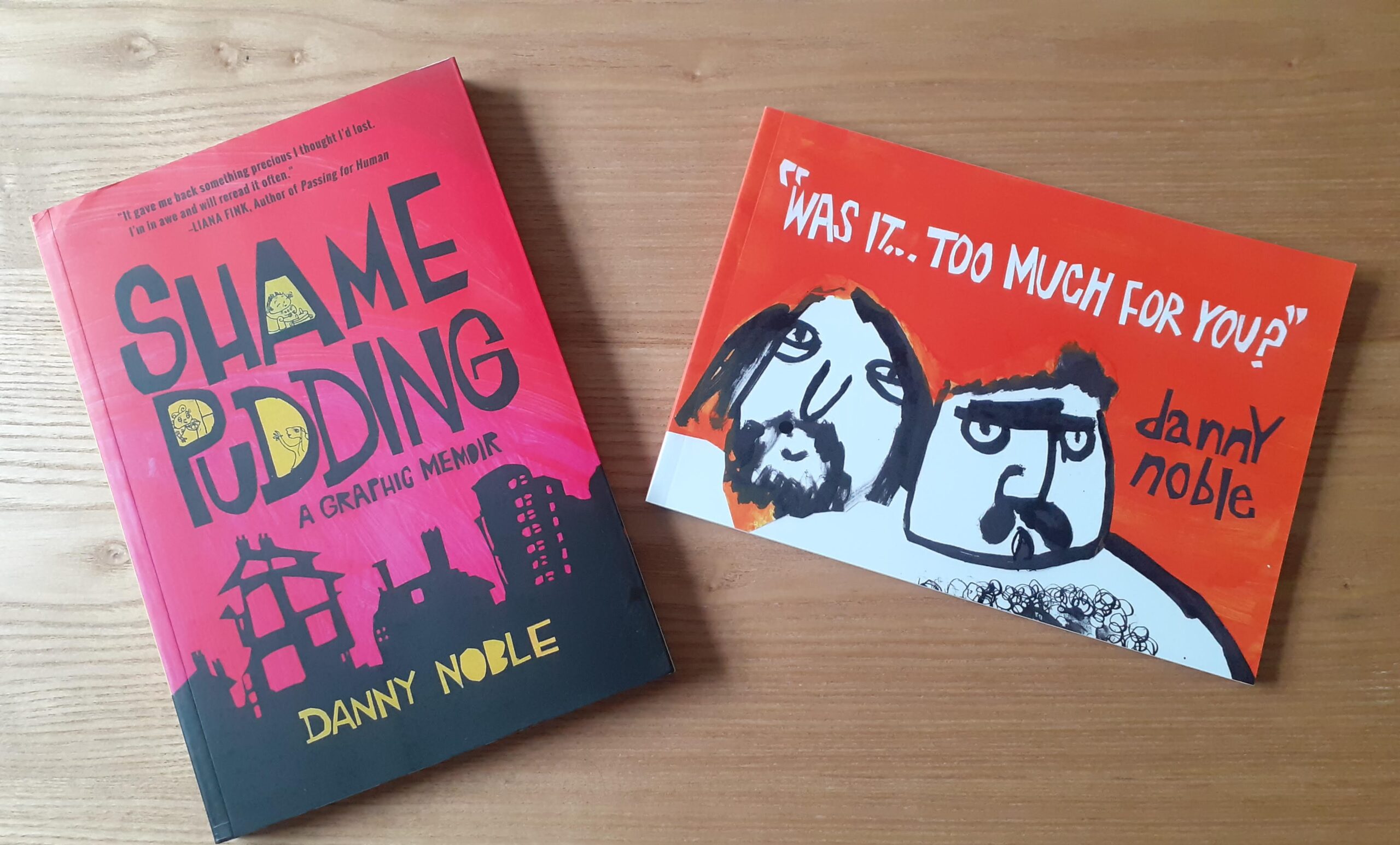 This October saw the UK publication of Shame Pudding, the tender and hilarious new graphic memoir of the hugely talented local author and illustrator, Danny Noble. Detailing life growing up in Brighton, like any great novel or memoir, you quickly become deeply immersed, and your absorption is further enhanced by the playful and poignant illustration that accompanies this refreshingly offbeat, yet wistfully familiar world.

The book’s title comes from a Yiddish phrase, yelled at Danny by one of her two Grandmothers who don’t only feature in the book, but star in it. In fact, they would star in any book they were in, and they are portrayed so charismatically you can’t help but feel bereft for not knowing them. Danny’s relationships with them both, clearly hugely important for all three of them, are as heart-breaking as they are heart-warming.

However, this memoir is far more than the relationships the author has with her family. Through unflinching honesty and the use of powerful imagery and visual metaphor, the book delicately unpacks the layers of inner turmoil to be found in adolescence; the insatiable, self-sabotaging doubts and introspection, the unjustifiably harsh self-criticism and exhausting insecurities. A beautiful, metamorphic relationship between the author and her inner self is portrayed visually, providing an undiluted impact with an immediacy that only the graphic genre can provide. 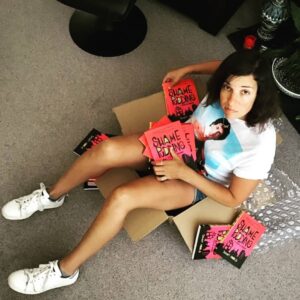 But don’t think that such a self-examination is in anyway maudlin or self-indulgent. More than anything, it is a joyous celebration of family and the experiences, good and bad, that make us who we are. It is a celebration of love and acceptance, and of our differences and our similarities. You’ll find yourself whisked back to your own childhood innocence with depictions of Christmas so evocative, the laughter and fizzing excitement come flying off the page, and before you know it, you’re grinning ear to ear and remembering asking the same question as soon as you wake up: “did he come?”

Reading Shame Pudding will arouse pretty much every emotion you’ve got inside you. But ultimately, as I turned the last page, the overriding feeling I was left with was being joyously uplifted. And wanting to call my Granny.

Danny Noble lives in Brighton. As well as Shame Pudding, she has published Was it… Too Much for You? and illustrated two children’s books for Adrian Edmondson, Tilly and the Time Machine, and Junkyard Jack and the Horse That Talked. If that wasn’t enough, among other things, her has featured in numerous anthologies, and she entertains large followings on Instagram (@mundy_morn) and Twitter (@mundymorn), and sings in the ska band The Meow Meows. This year she jointly won the Comedy Women in Print Award, graphic novel category, with Posy Simmonds (Cassandra Darke, Gemma Bovery).

Believe it or not, between all that, Danny found time to speak to me about her work, the best bits of Brighton, and bad housekeeping.

What can readers expect from your poignant memoir, Shame Pudding?
A big, warm, Jewish grandma hug in book form. Shame Pudding is the story of how I grew up as a weird little anxious kid in 80s and 90s Brighton and found my voice through drawing, politics and a bit of rock and roll, with a tremendously patient family never far away.

Was it difficult being so open and honest or was it a cathartic experience?
Both. Like all good self-indulgent artists my work is mostly about me, but I usually attempt to disguise it at least a little bit. Shame Pudding being so explicitly about actual people and events, I would sometimes wake in the night with palpitations about upsetting family and friends, but I think in most of my anecdotes I come out as the ridiculous one.

Did you complete the book and then look for a publisher, or did you have a book deal lined up? If the former, was it difficult to commit to such a project without the guarantee of publication?
I was messing around with various different projects but it was hard to hunker down and devote time to something substantial as I was working full time as a teaching assistant, singing in the band and studying on line, too. So, I wrote on my website that I was working on a graphic novel in the desperate hope that someone would believe it and give me a deadline. Luckily someone fell into my trap. Liz from Street Noise Books in Brooklyn had seen a comic I made for an anthology and wrote saying that she’d love to see what I was working on, so I got to work! 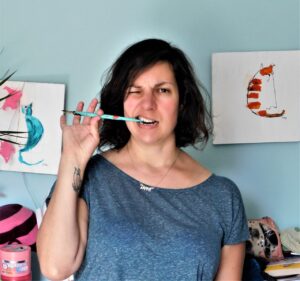 Does the fact that Shame Pudding was published in the US suggest that you’ve already tapped into the American market?
I’m completely unknown in America, and I wondered if my very British little story would translate. But Street Noise were willing to take a chance and I’ve had some very beautiful messages from readers in America and around Europe so that’s been bloomin brilliant.

The inside-cover bio alludes to hard times, living in a trailer in a park throughout several winters. Do you have any plans for a follow up memoir that might include that part of your life?
Ah, they weren’t hard times! It’s true I moved into the caravan because it’s pretty impossible to live in London on a teaching assistant’s wage, but I loved my caravan. I may have once accidentally grown a mushroom in the carpet because it got so damp… But that was mostly bad housekeeping on my part.

How did working with the brilliant Adrian Edmondson come about?
About five years ago I noticed someone called Adrian Edmondson was following me on Twitter and I said “that’s funny he has the same name as one of my comedy heroes, Adrian Edmondson!” and thought no more about it until a couple weeks later when he tweeted something nice about my work and on further investigation I realised it was THE Adrian Edmondson and I better follow him back! About two months later he messaged and asked if I was interested in illustrating his first children’s book. He has no idea how he came across my work on Twitter but I’m very glad he did and he was a joy to work with.

You’ve had work published in a range of anthologies, as well as presenting your own web comics on social media: how difficult is it, as an illustrator and author, to get your work noticed?
Social media gives us a way to reach out directly to an audience, but also means that there’s several billion other people doing the same, so it can be easy to get lost in the noise. I’m horribly awkward at promoting myself and selling my work but I lurch around clumsily doing it when I can. I’ve found the independent comics community very supportive and this year as well as publishing Shame Pudding I was shortlisted for an Arts Foundation Award and jointly won the Comedy Women in Print Award graphic novel category, alongside the legendary Posy Simmonds. So, it feels like all the shouting into the abyss is finally paying off!

What was your inspiration behind the hilarious and brilliantly absurdist take on the relationship between Alan Bates and Oliver Reed in Was it… Too Much for You?
I was working on a daily comic diary called Monday Morning, and in one strip I fixed my broken telly only to find Ken Russell’s film Women in Love had just begun. The famous naked wrestling scene was just as amazing as I’d heard, and so naked Oliver Reed and naked Alan Bates began making guest appearance in my diary strips ‘til they became more popular than me and demanded a strip of their own.

How has lockdown been for you? Has it given you a chance to work on any new books or projects?
I think I’ve been relatively lucky in lockdown, but I’ve had extreme brain fog and fatigue so I’ve not been as drawy as I would’ve liked. I have kept a half lucid picture diary I might unleash on the public at some point, and I’ve begun working on very rough roughs for a comic I began working on 10 years ago but accidentally turned into a novel. I’m hoping to turn it back into comic form.

Who were your inspirations?
Too many to mention. I don’t know… Bananarama and Angela Davis.

Is there anyone you would like to write a graphic biography about? If so, what would the title be?
I get too worried about upsetting people. I’d rather write more thinly disguised comics about myself being a tit.

Do you still sing with your ska band The Meow Meows?
I do, though we’ve not been able to get together since lockdown. I’m very much missing playing with them and can’t wait to be a band again.

What do you like best about living in Brighton?
Brighton is as ridiculous and annoying as I am but I love it. It is music and fun and beautifully queer, with a pub on every corner. You can walk that way and get to tiny cobbled streets full of antique shops and that way and get to vast open green hills. But the best thing is the big, bonkers stroppy ocean just over there.

Shame Pudding is published by Street Noise Books
For more information about all of Danny’s work, please visit her website