by Louisa Streeting
in MUSIC
0

Pop music has been an unstoppable force in culture since its conception. The players in the genre produce catchy hooks and sweet melodies, offering irresistible earworms for most. Known previously for their cosy indie qualities, Girl Ray has taken a leap into the world of pop. The North London trio consisting of Sophie, Poppy and Iris have been playing and making music since they were at school together. Their bassist, Sophie, explains how the band grew to love pop music and how it trickled into the sound of their newest record.

Sophie began her musicianship in classical guitar, but after reaching a high grade, she decided she was frustrated at not being able to dictate what she played in lessons. She met vocalist and lead guitarist, Poppy, at an after-school club that played rock music. “I was really impressed because she could play proper chords, and I just wrote music like a nerd.” The formative years of youth is a time of building relationships, with music taste often creating a bonding moment in friendship circles – the girls were brought together through a mutual appreciation of indie.

Sophie decided to ditch guitar and learn to play bass. “Poppy just taught me the basics, really. I was just trying to channel the girl from School of Rock. Slowly I became me.” Sophie explains how Poppy would say composing and writing lyrics was her form of diary logging. “Those songs were just for herself to begin with to vent. I think for all of us in this new record, it’s a slightly happier message.” 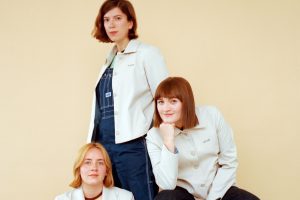 Their wordplay Earl Grey is a lo-fi, indie debut filled with fuzzy guitar riffs and gentle harmonies. Girl takes a slightly different direction, seeing the band reinvent their dreamy melodies to create music “to fall in love to”. The album’s first single Show Me More is carried by Sophie’s upbeat bassline, infused with lyrics about romance. “Half of [the songs] were written with the summer in mind – at least for Poppy. She loves the summer, the South of France, the heat, the romance.” Sophie tells me the girls have grown into pop together. The band initially met Poppy’s liking to Calvin Harris with scepticism (no stranger to songs about summer himself), but they all bonded over his contagious, anthem-like music.

When recording and producing their second studio album, they faced unavoidable delays leading their summery synth-pop record to be released early November. “People can dream of the summer”, she jokes. Although their synth-heavy album reflects the band’s fond summer memories, their sound was moulded along the way by Ash Workman, producer of Metronomy and Christine and the Queens. “He knows”, Sophie begins. “But he’s also really up for experimenting and doesn’t know what’s going on as well which is nice.”

Girl Ray will play an intense stint of shows in the UK, with dates around Europe and concluding in Paris. “I was always so terrified of playing live, it took a lot of forcing myself to do it and now I really enjoy it.” Sophie remembers watching Cat Le Bon when she was 17 and this having a transformative effect on her self-assurance. “It’s better to at least act confident even when you’re not. It definitely makes a difference.” 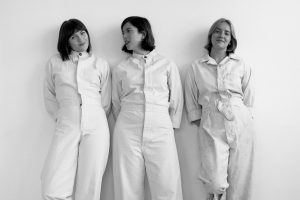 While touring an album can be intense, Sophie emphasises the importance of finding normality to keep level-headed on the road. “A sit-down meal is always a good place to relax if there’s time where you can face each other, talk and eat nice food.”

Films and podcasts are also useful staples for each of the girls when travelling around. The band will be joined by Lysandre, their fourth member for the Spring tour. Although Girl Ray has recently supported bands like Metronomy, they are eager to sink their teeth into headline shows of their own – as best friends.