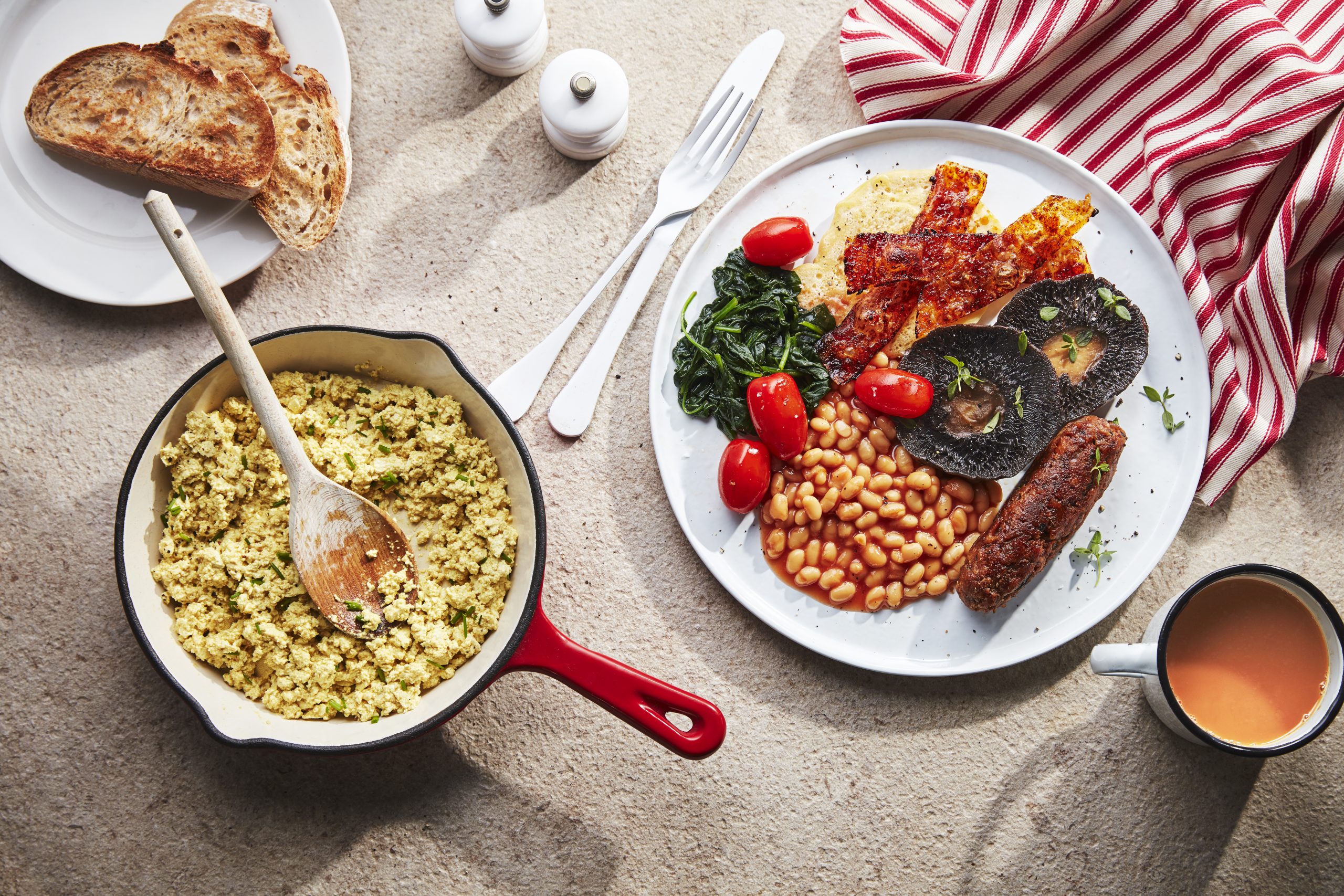 For many Brits who have attempted and failed to be a vegan, it was a craving for the classics that broke their resolve: the fry-up, the Sunday roast, bangers and mash, fish and chips – not to mention the temptation of a teatime biscuit or slice of Victoria sponge. And though the idea of experimenting with new cuisines that lend themselves more willingly to plant-based ingredients can be exciting at first, life can quickly get in the way, and the imagination can falter when faced with an empty supermarket trolley and an equally empty stomach.

Aimee Ryan, author of the Wallflower Kitchen food blog has come up with a book of plant-based versions of the classics to help out dabbling vegans. It’s called Great British Vegan and assures us in the blurb that ‘whether you’re vegan, flexitarian or merely interested in cutting down on your meat consumption, there’s no reason you can’t still indulge in all your favourite British classics, using easy-to-find ingredients.’

I spoke to Aimee over the phone on a Monday afternoon that was attempting to give us the winter wonderland snowfall that the rest of the country seemed to be having. After we lamented Brighton’s patchy-at-best snow covering, Aimee told me about her journey into veganism. In the summer of 2014, she gave herself a Veganuary-like challenge of a month as a vegan, and the habit stuck.

‘I had a few food blogging friends, or blogs that I followed, who were vegan, and I was curious as to why they were committed to eating no animal products at all, instead of just cutting down or being vegetarian. I did some research and it was one of those things where I couldn’t unlearn what I had learnt. When I decided to try it out, I wasn’t necessarily trying it thinking it could be something I could do forever; it was just curiosity. And I found it so easy and it felt right, so after that month, I continued.’

It’s easy to forget how far veganism has come in the last ten years or so. In the years between 2014 and 2019, the number of vegans in the UK quadrupled. We’re one of the world’s most vegan countries, with Brighton reportedly the most vegan-friendly city in the UK. This was one of the reasons Aimee decided to move here in 2017.

Back in the mists of time when we could go out to eat, one of Aimee’s go-to vegan restaurants was Purezza, which was actually the UK’s first plant-based pizzeria, and has premises on St. James’ Street and Western Road. Her other favourites include Foodilic and Wai Kika Moo Kau in Kensington Gardens.

Aimee stresses that her passion for promoting veganism stems from an ethical standpoint. For her, it’s the environmental impact that evokes the most striking statistics, and the effect of taking small steps, like having one meat-free day a week, can make a huge difference on your carbon footprint. Aimee’s mission is to nudge people in the direction of making these small changes to their routine, by suggesting tasty, easy alternatives and letting the food (with a side order of stats) do the talking. Her dad is a testament to how easy this change can be.

‘My dad was a typical meat-eater. He loves his steak and bacon, but in the past year, he has become almost fully vegan. There is a company called This and they do vegan bacon. He will have that bacon instead of pig bacon. He makes a lot of recipes from my book. He just doesn’t miss eating a lot of meat now that he knows that he can have the same flavour and that familiarity. He thinks it’s easy. I prefer to just introduce people to more plant-based recipes. Just because that’s my approach.’

Her new book is the culmination of that philosophy. Everything in there will be comforting and familiar. The sumptuous pictures look just like their non-vegan originals, from crispy bacon and scrambled eggs to haggis, neeps and tatties. Coming up with these recipes wasn’t always an easy task, however, and took a great deal of experimentation and hard work. The trickiest one to get right, Aimee tells me, was the Yorkshire pudding.

‘I had a love-hate relationship with those Yorkshire puddings. I don’t know what it is. They have their own science. They’re very fickle… I finally got them where they emulated what I remember Yorkshire puddings being like, but it took a lot of experimenting. Instead of eggs, I use gram flour or chickpea flour. It gives it that slightly eggy texture. I don’t know what it is exactly. It creates that doughy but puffed up texture. It just works.’

It’s never been easier to be vegan

With books and blogs like Aimee’s, plant-based alternatives lining the supermarkets shelves and high-profile initiatives like Veganuary to give you the initial impetus, it’s never been easier to be a vegan. And perhaps more importantly, the image of veganism has changed. We discussed how certain methods of activism can actually put people off becoming a vegan.

‘If someone told me not to eat meat and then showed me all this horrible footage, I would probably just want to shut down and not look at it, because it’s too aggressive. I prefer a gentler approach. That’s how I got into veganism. That’s my approach with other people as well. Obviously, I think activism is important; it’s just not my personal world.’

Veganism has become friendlier and more inclusive. Rather than violence and shouting in the streets, the message is more often spread by bloggers and writers like Aimee, in the form of, ‘these are the stats, this is what you can do to cut down on your meat and dairy consumption, and here are some nice things to replace the meat with.’ Of course, it needed the militancy of animal rights protestors to bring the cause into the social consciousness, but now, it feels like a critical mass has been reached and a tendency towards plant-based leaning diets can only continue to gain momentum.