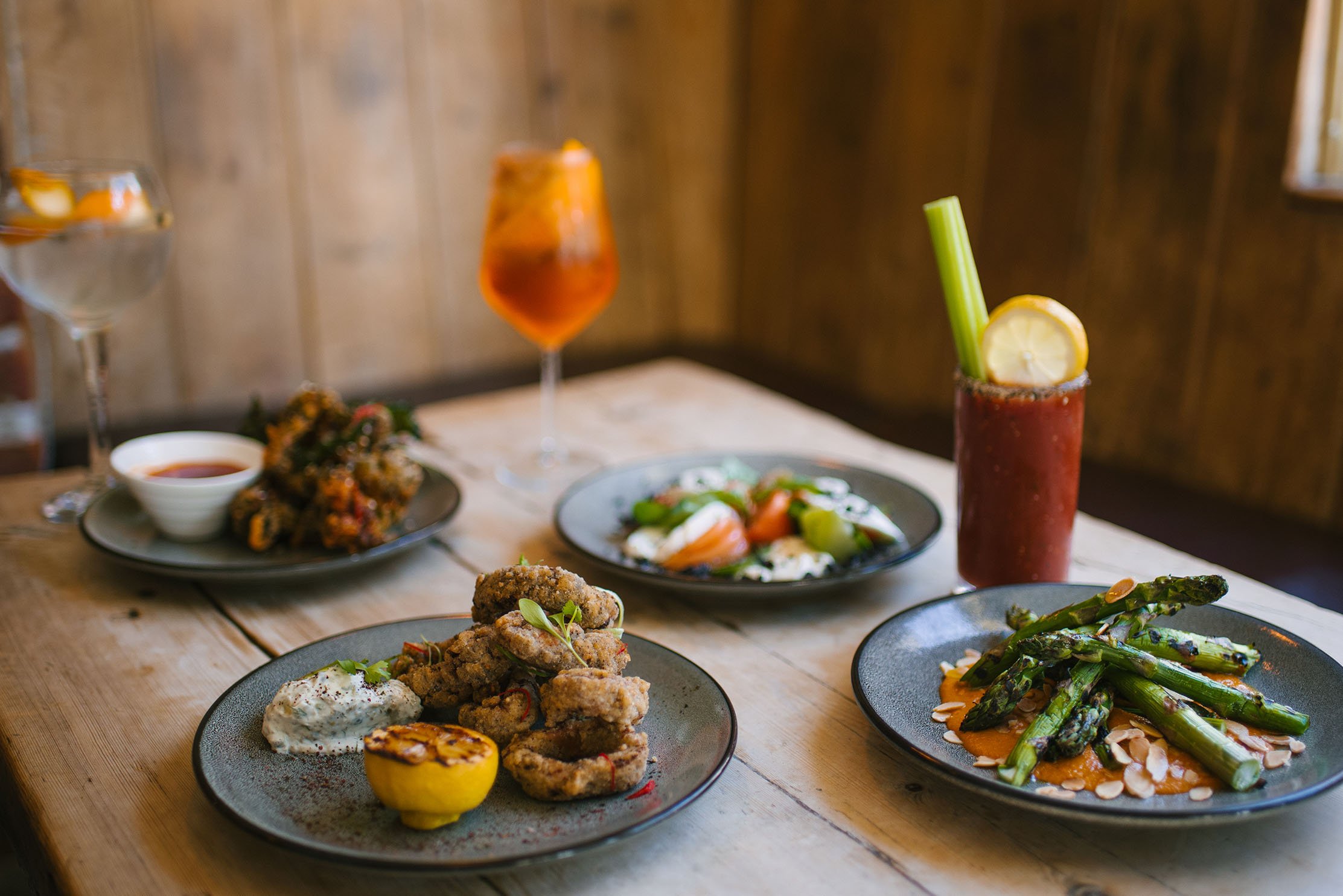 As I walked the short distance from my home to Earth & Stars, something told me I’d earnt this meal that evening. It’s not too long after the pub’s menu has been reimagined by Brighton’s dynamic chefing duo, Wolfsmouth. The kitchen now offers an eclectic array of small plates (also functional as starters) and a variety of main dishes.

To start, we chose two dishes from the small plates menu: crispy squid (£6) and Tempura sprouting broccoli (£6.50). The squid was coated in a thick but delicate peppered batter, which fell apart pleasantly in your mouth. The broccoli covered in nutty sesame seeds is cut through by the sharpness of the sweet and sour sauce. Both dishes are large, but we finish them anyway (although, if anyone has been to The Paradiso Social, they will know their small plate portions are extremely generous).

One of two vegan main dishes, the Panko squash burger is enormous in both size and taste. The patty used a thick and fresh slice of butternut squash in a light crumb (£11). I loved how the zing of the scotch bonnet jam and the mellowness of the smashed avocado balanced each bite. Pub favourite, Fish & Chips, was placed on top of the most delicate mushy peas, puréed to perfection (£13.50). The batter was crisp and clung to the fish. We dipped thick- cut wedges and the burger’s fries into the pub’s in-house homemade sauces, ketchup and vegan mayonnaise. Holly, who looked after us, said she was now a convert from Heinz and so we took her word for it! Both sauces were faultless, full of flavour.

Wolfsmouth and Earth & Stars very kindly offered us to return for their Sunday Roast – an offer I could not turn down after our delightful evening meal in the week. My dining partner and I chose the two vegan roasts due to their distinctiveness. Although, I did note – avid omnivores can enjoy the choice of 60-day aged beef rump (£16), chicken breast with pulled thigh (£14), or apple glazed and herb crusted pork chop (£15).

The first choice is Roasted Jerusalem Artichoke and Soaked Celeriac Wellington (£13), straying away from the conventional mushroom-based filling the vegetarian version usually offers. The thick, flakey pastry held together with every bite of the Wellington, with lovely layers of spinach, pine nut, and Kalamata Olive Tapenade. The other vegan option is slightly unusual for a roast – a tart filled with heritage and sundried tomatoes, wild garlic, chilli, and topped with char-grilled aubergine. This main component brings a warm kick to the rest of the meal, with the heat of the chilli lingering comfortingly on the palette. The shortcrust pastry does not disintegrate under the wet fillings. The tart is a risk that strays away from a traditional roast, but it certainly pays off.

Both meat and vegan roasts are served with glazed carrots, two types of cabbage, green beans, celeriac and parsnip purée, and summer peas. The purée adds such a Despite the long list, I would have loved a slightly larger portion of veg as they were incredibly fresh. Fear not, as extras can be purchased for just £2.50, including seasonal greens (Yorkshire puddings are £1). The garlic roast potatoes were perfectly crisp on the outside and soft in the middle, and the dairy-free cauliflower cheese is a wonderful touch for the vegan roasts. Both are paired well with lashings of the pub’s rich miso gravy.

The Caribbean Kitchen at The Druids Arms

Both meals were punctuated with friendly staff and a warm atmosphere inside the pub. Thank you to Holly and the rest of the team for looking after us so well. Now with five separate sites dotted all over the city, Wolfsmouth’s mini culinary empire continues to pick up the pace, with two new sites to be launched in a few weeks’ time. I applaud Jack and Will for their rapid expansion and continuously bringing winning flavour combinations with their dishes.