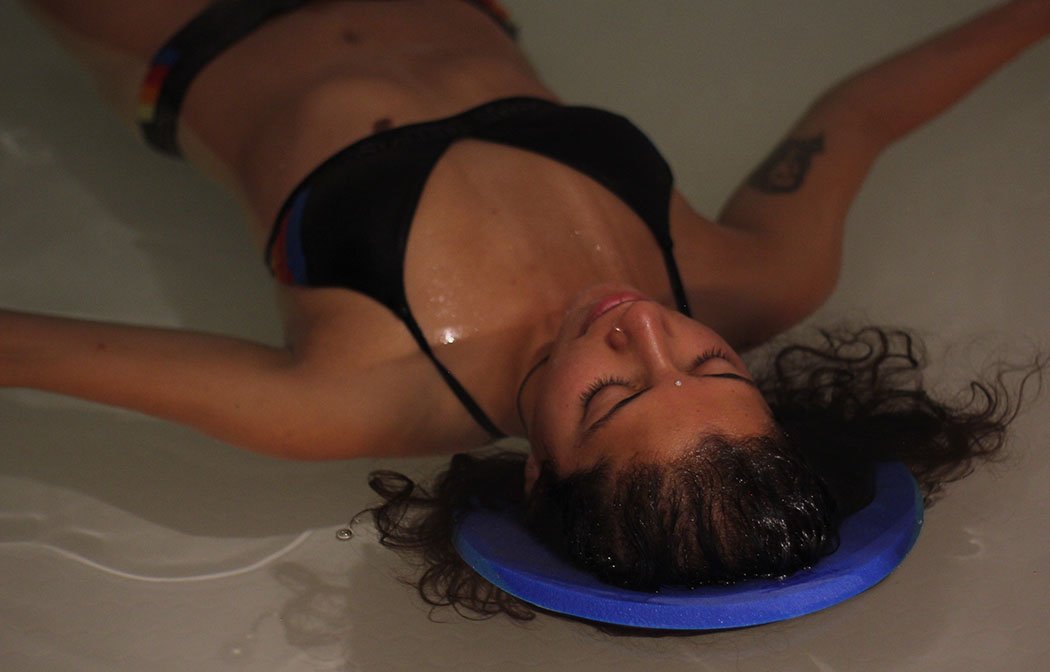 Since they were first used in 1954 to explore the effects of sensory deprivation, floatation tanks have fluctuated in popularity, appearing prominently in the 1980 Ken Russell film Altered States and ultimately gaining widespread acceptance in recent years.

The benefits are considerable, with those who float reporting the treatment relieves stress, anxiety, jet-lag, insomnia and muscular aches and pains. It’s even supposed to improve concentration, memory and energy levels – all by simply lying in a shallow pool of Epsom salt water heated to body temperature, naked as you came into this world.

But how exactly does it work?

“It’s interesting what happens to your brain when you take the outside world away,” explains Effie Love, who opened About Balance in East Street four years ago. The location has since changed (you can now find them in  Gloucester Place), but the ethos remains the same: providing wellbeing and treatments to the masses at affordable rates. She adds: “Within 40 minutes of floating, your brain waves change from alpha to beta – or even theta, which is what happens when you fall asleep or just before you wake up. You might find you feel ‘bored’ – but that’s good! It makes our brains more creative.”

Intrigued, and mid-way through a particularly digitally-heavy week, I decide to give it a go. Predictably, it does take a little while to fully relax, but as the initial panic of not being able to see nor hear anything dissipates, along with my sense of direction, slowly my worries go with it too. And then the magic happens.

Without the distraction of every day stimuli, my brain was left to form its own images and ideas, and before long I was basking in the sunlight kilometres off the coast of The Maldives, my inner critic gone. Emotions both high and low came and went, and for a moment I became almost childlike, the floating offering a sense of freedom from societal expectations as I playfully lapped at the water around me. With nothing to think about for a whole hour, I was able to process everything I had been mentally storing all week, and by the time the 60 minutes were up, I felt lighter; freer. This lasted the rest of the week.

The digital age means we’re rarely free of interruptions (research shows the average person is now distracted around every 40 seconds), but floatation therapy offers a welcome haven from the blue screen it would be difficult to replicate elsewhere.

Floatation sessions at About Balance Brighton cost £55 per person (£35 with in-house loyalty ‘Karma card’), and £100 for two people.

What a little prick

ABOUT US
BN1 Magazine is the leading source of entertainment and lifestyle news in Brighton & Hove. From comedy and theatre to clubbing, music and festival line-ups, we cover a range of events across Sussex and beyond. We can help you find a fabulous vegetarian restaurant, catch an amazing new band at The Great Escape and see a hypnotising performance at Brighton Fringe. Sometimes all in the same weekend… Whether you’re a student and new in town, trying to pack plenty of family fun into a visit or a local planning a massive night out, we’ll tell you everything you need to know. From pubs and bars to art and shopping, it’s time to kiss those lonely blues away in one of the world’s most interesting cities.
FOLLOW US
© Copyright 2019 BN1 Magazine. All Rights Reserved. >Privacy Policy
MORE STORIES
HEALTH & FITNESS