I’ve always had a fondest for Brighton’s Harbour Hotel and it’s reframing of British luxury hospitality. The seafront location affords sweeping vistas to the wind farm, and the arrival of its quirky glamour inspired a rejuvenation amongst the surrounding area. Inside this restored Regency building is a beautifully decorated bar, adorned with art as diverse as Jamie Reid and Rubens. It’s a cool place, but still welcoming. This evening, as the longest day starts to fade, the Burger Queen and I are checking out Harby’s, the hotel’s bold, but somehow reassuringly familiar, new eating concept.

This ground-floor restaurant has been formed into a loose reimagining of the American diner. But don’t expect checked tiles, bored waitresses or acres of neon. Reference points are subtle, leaving the food to speak for itself. The space is larger than first impressions suggest. Interesting and varied seating areas are tucked everywhere, including some snug booths at the rear and a long table to accommodate all but the most numerous of groups. The latter offers a superb view of the open kitchen and lovely stained-glass beyond. The result of excellent interior design or luck (I can never tell), even if the place is rammed it still offers an intimate and inviting dining experience. 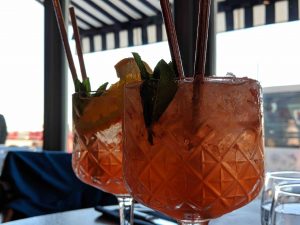 To enliven both paillettes and spirits, we select a Harby’s Spritzer (£7.90) to accompany our animated menu dissection. As you guessed, this is a house special, blending Brighton Gin, Aperol, prosecco and strawberry. It’s summery and fruity, everyone’s favourite local brand gifting a clean, slightly orange finish. The menu is dazzling in its plurality. There’s something for even the fussiest of eaters here, populated by thoughtful and creative reimaginations of classic dishes.

Most alluring on the menu was a vegan Mac & Cheese (£4). I know a thing about sauces, my hearty roux being the toast of Hanover. Cynically, we select this to represent the extensive vegan offerings – cheese is a difficult thing to replicate. Considering it’s completely dairy-free, this bad- boy is interesting, even better than traditional versions I’ve sampled across the city. I won’t divulge the methodology here, but if you’ve eschewed animal products, yet still crave creamy comfort food, this may hit that spot. 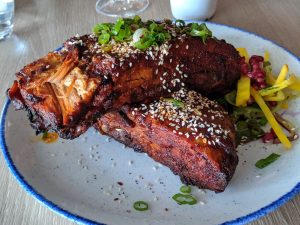 The Burger Queen, for once, didn’t have her meat shoved in a bap. Ribs is her new thing and here Harby’s brings its A-game. The St Louis Belly Ribs (£16) are 18-hour smoked and glazed with a rich barbecue sauce. Although only a half portion, most of this generous serving will be coming home in a doggy bag. The plate is piled with succulent looking meat, superbly smoky and slightly spicy it separates from the bone with minimal effort. Alongside sit triple-cooked chips (£3.50), chunky and crisp on the outside, the fluffy centre completes a lovely melange of textures.

To complement the meal, we order a crisp Valencian Bodegas Covinas Rama Viura (£18). This is dry, fruity and light, giving suggestions of exotic fruit with a delicately floral note. In fairness, it could have been a little cooler, but the wine bucket quickly dealt with this. As we’re next to the sea, it seemed appropriate to sample some seafood. Monkfish in Prosecco Tempura (£18) is another house speciality, joined by smashed peas, even more, thick-cut chips (hooray!) and tartare sauce. The prosecco bubbles make the batter as light as you could ever imagine. It tears easily, allowing access to some delightful monkfish. Sometimes not an easy fish to cook, it’s tender to the bite with a lovely sweetness in the flesh. Adding to this are perfectly piquant tartare and subtly minted peas, to bring balance to it all.

Food to boost that winter mood

Harby’s manager, Matilda, tells me the Harbour Group wanted to try something different in Brighton. “It’s a bit more casual and for the young people.” The menu has been designed to encourage sharing, stepping sideways from formal dining without compromising on inventiveness and taste. Where Harby’s succeeds is creating a comfortable and inclusive environment, which gives equal attention to omnivorous and vegan dishes. It proves great food doesn’t have to be staid or pretentious.

We leave it at that, attempting not to over-eat despite several temptations left upon the menu. Even a dessert might be too much, but Matilda presses a box of beautiful cupcakes into our hands as we escape to the bar and its extensive cocktail list. This presents five different Expresso Martini offerings alone, so we continue a very enjoyable evening.

Harby’s at the Harbour Hotel is at 64 Kings Road, Brighton.