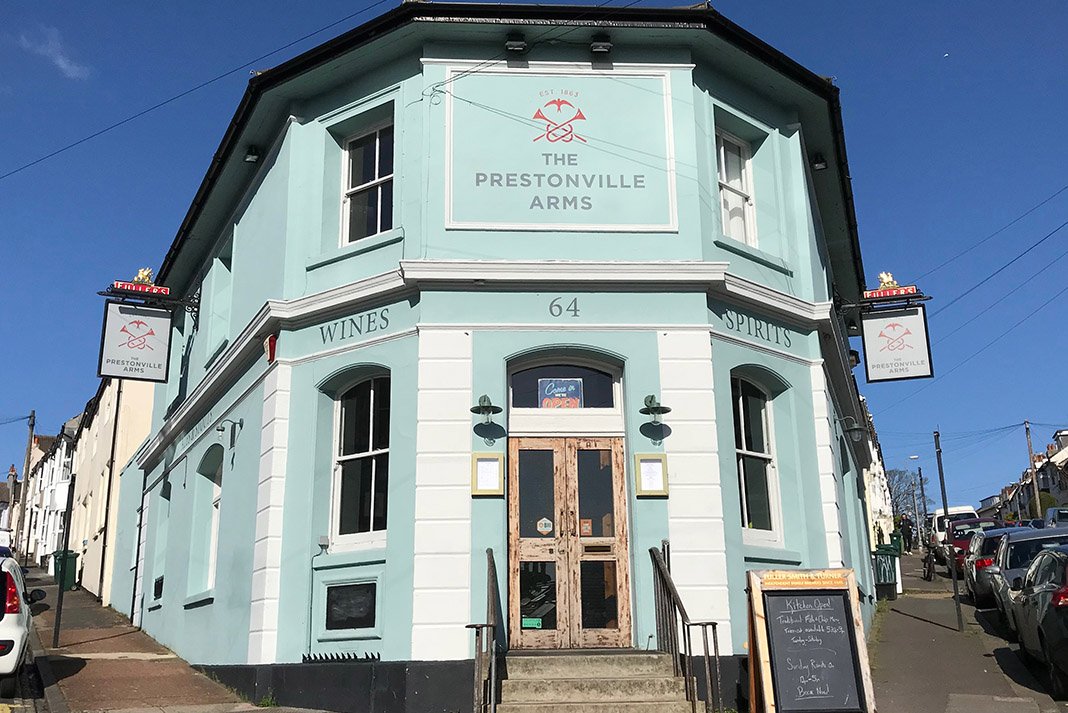 The older I get the more general life seems to piss me off. Brexit and all the associated embarrassing shenanigans would be pretty high up there. As would people that jump queues (how very British of me) and the man that lives downstairs who plays drums and is resolutely refusing to get any better (well he might be trying but he’s certainly not succeeding). To ensure I’m not just wandering around grumpily shouting at strangers I have to neutralise all these negatives and partake in activities that make me happy. A glass of wine and a book, binge watching a great series on Netflix or a lovely meal in nice
surroundings usually do the trick and it’s this last one whereby The Prestonville Arms on Hamilton Road came to my rescue.

Scurrying in on a cold March evening and I was hit by an immediately welcoming atmosphere. A large oval bar, manned by the lovely Dan who runs the place with his wife Danielle, is resplendent amongst the warm wooden floor and tables. Interesting Brighton pictures and prints line the walls and small set of stairs lead to a lovely little nook in the pub for those wanting a more intimate seating area. Most importantly (certainly for me anyway) is that it is completely devoid of the try-hard décor and atmosphere that unfortunately pervades a lot of the pubs and bars in Brighton. This is reflected in the
simple but satisfying menu of fish and chips. We decided to chow down on Beer Battered Haddock (£7.45), Breaded Scampi (£7.45), Regular Chips (£2.95), Mushy Peas and Beef
Gravy (£1.50). Even better if you are in a bit of a rush or fancy just grabbing some food to go, all of it is offered as a takeaway and comes in a fair bit cheaper.

Taking my first bite I was pleased to note that the haddock had been treated with the utmost care and battered with real skill. The flaky, flavoursome and succulent fish was complemented by the crunchy batter. After every bite the scampi exploded with a juicy, fishy loveliness which is really hard to achieve- I often find scampi to be dry and uninspiring. The chips were chunky, well-cooked and plentiful and even better when
smeared in the creamy yet fresh-tasting mushy peas. I was also incredibly impressed with the gravy Fish and chips often get palmed off with the really cheap, gluey stuff however this was wonderfully beefy and had a beautiful pour.

As if I wasn’t happy enough, I decided that hey, I’m in a pub, so I may as well be drinking too. Usually I’m one of those annoying people that starts losing interest in things once they get popular however I just can’t leave gin alone, in fact if gin were a person I would suggest she get a restraining order against me. So it was easy to choose a Tanqueray and
fever tree tonic (£5) to slurp while waiting for dessert. It wasn’t long before an attractive Apple and Red Berry Crumble with Vanilla Ice Cream (£4.95) and a Sticky Toffee Pudding with Toffee Sauce and Ice Cream (£4.95) arrived. The sticky toffee pudding was rich, warming and sweet and was accompanied by a beautifully gooey sauce. The crumble was awash with the tartness of the gloriously cooked fruits while still retaining the
comforting taste of a really good dessert. Bravo to Craig – chef extraordinaire!

Realising that as a Seven Dials resident, this place is pretty much on my doorstep, so a week later I decided to give their roasts a go. Now I take my roasts pretty seriously, most
Brighton residents do, so they had a lot to live up to. I’m a sucker for roast pork so I went for that and it came with Garlic Roasties, Glazed Beetroot and Carrots, Cauliflower Cheese,
Buttered Greens, Root Veg Mash, Giant Yorkshire Pudding and Gravy (£14) and ample veggie options for the non-carnivorous amongst us. The pork fell apart with each jab of the fork and the crackling was crispy and moreish. Perfect potatoes that were crunchy on the outside and fluffy on the inside, expertly cooked al dente veg, a particularly cheesy cauliflower cheese and a scrumptious yorkie. I saw a table who were particular fans of the beef gravy ask for a bit extra and I liked how friendly and enthusiastic the response was, especially when some pubs can look a little surly at such requests.

The One Where… Deliveroo Comes Through with a Moist-Maker Sandwich

After experiencing two really lovely meals at The Prestonville Arms it’s safe to say this won’t be the last time they see my cheeky face, and I suggest if you haven’t been yet that it jumps to the top of your list.

The Prestonville Arms will also be on the Artist Open House trail during May. So be sure to pop in for a drink and admire the art on display.