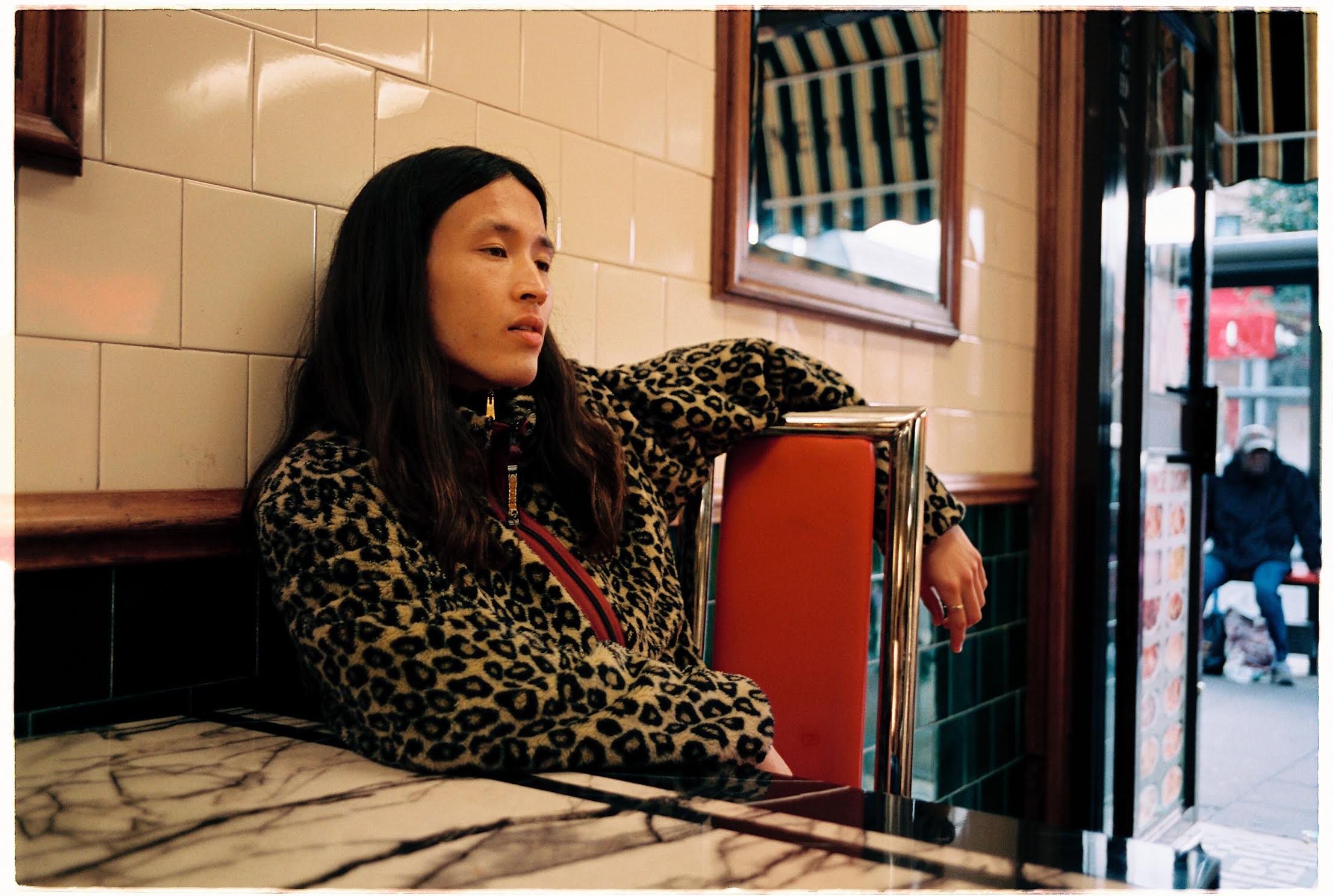 Natty Wylah is a rare find. Until very recently if you searched for the 26-year-old rapper online you would glean scant detail. A little gold here and there sifted from the internet’s gloom. All that changed two weeks ago with the release of his fiery debut single WHOAMI on Spotify.

Describing his track as “heavy and venomous” it’s a disquieting sound. Lashing out at the cultural displacement he felt as a kid, growing up in North London of Chinese heritage, with a ‘homeland’ he felt no connection to. This dissonance has created such fertile ground for him as a lyricist. I caught up with Natty on the cusp of his single release to find out what makes this elusive artist tick.

Your lyrics are visual and metaphor-driven, urban landscapes are reframed with a poetic eye, what influences inform your writing? “I like contrasts and dualities. Falling leaves against the tarpaulin of a building or some shit like that” Natty says. Tracksuited in pastel pink with long boyish hair, he is relaxed and candid. “Want one?” he offers me a chip from his plate.

Inspired by Leonard Cohen “the great writers” he relishes the task of unlocking the meaning “you’ve really got to dig in, I’d like to move to that sort of output” he says. He’s a big Murakami fan after his girlfriend put him onto Kafka on the Shore and he lights up with enthusiasm about his favourite author: “He’s the boss. Unbelievable, he leaves you so contemplative and confused at the end of every story but also you really feel like he’s touched something that’s unwordable.”

He started rapping at the age of 13 for laughs with his close friends “typical teenage stuff, nerve-wracking” he says “but the rapstyle I was emulating wasn’t personal, it was more the performance aspect of it.” When he wasn’t freestyling he was dabbling in graffiti around the parks of Queens Crescent and Kentish Town. Obsessively sketching and practising his craft, he said: “It felt like an adequate way to go and express myself in a calculated, secretive, rebellious way. I liked the anonymity of it.”

And it’s from this same outsider stance that he observes the surreal in the mundane, travelling on trains, in parks, watching someone come through with a dog or a change cup, talking on the phone in a different language. I wonder if silence is an important consideration for him when it comes to writing, how he uses the breaks. Yeah, the space in-between, he agrees. “There’s a piece by Polarbear (spoken-word poet, Steve Camden) he’s sick – Jessica – it’s a love story about his childhood sweetheart. Polarbear said the spaces between words deserve to shine.“

It’s something you have to be aware of he tells me, especially when you’re rapping. These condensed poems are so rapid it’s important to allow people time to interpret. Another guiding light is MF Doom and how he works with listener anticipation, steering away from cliches and old motifs. “He leaves a space in your mind where you would have predicted something’s going to happen, and does something maybe subliminally related. It’s an interesting way to offset your typical rhyme pattern” he says.

Performing with live band Sunken has taken Natty’s delivery to a new dimension, with jazz and hip hop influences at play, it’s a step up from the ‘beats and bars’ of his youth. He met Lynchian-esque Sunken at a fundraiser gig in Manchester five years ago, raising money to teach skateboarding to kids in Palestine. Headed by Poppy Billingham, the band learnt his instrumentals in less than a week and played the gig off the cuff, they’ve been collaborating ever since. He describes his performances with them as “jams finding a balance, teetering on some fault that makes it exciting”.

With a mixtape produced by Srigala, Purple Cloud and Nine 8’s Mac Wetha set to release next January and a gig at the Windmill Brixton under his belt, Natty’s come a long way since those teenage years, penning raps in his bedroom. How did it feel to play at such a legendary venue? “It’s really nice to play at the Windmill, the sound in there is wicked. The tinsel topped it off” he laughs.

He puts headphones on to listen to a mix of one of his tracks and gives his verdict: “It needs to be even more fucked up, I’ll mess with it” he says, and breaks into a warm smile.