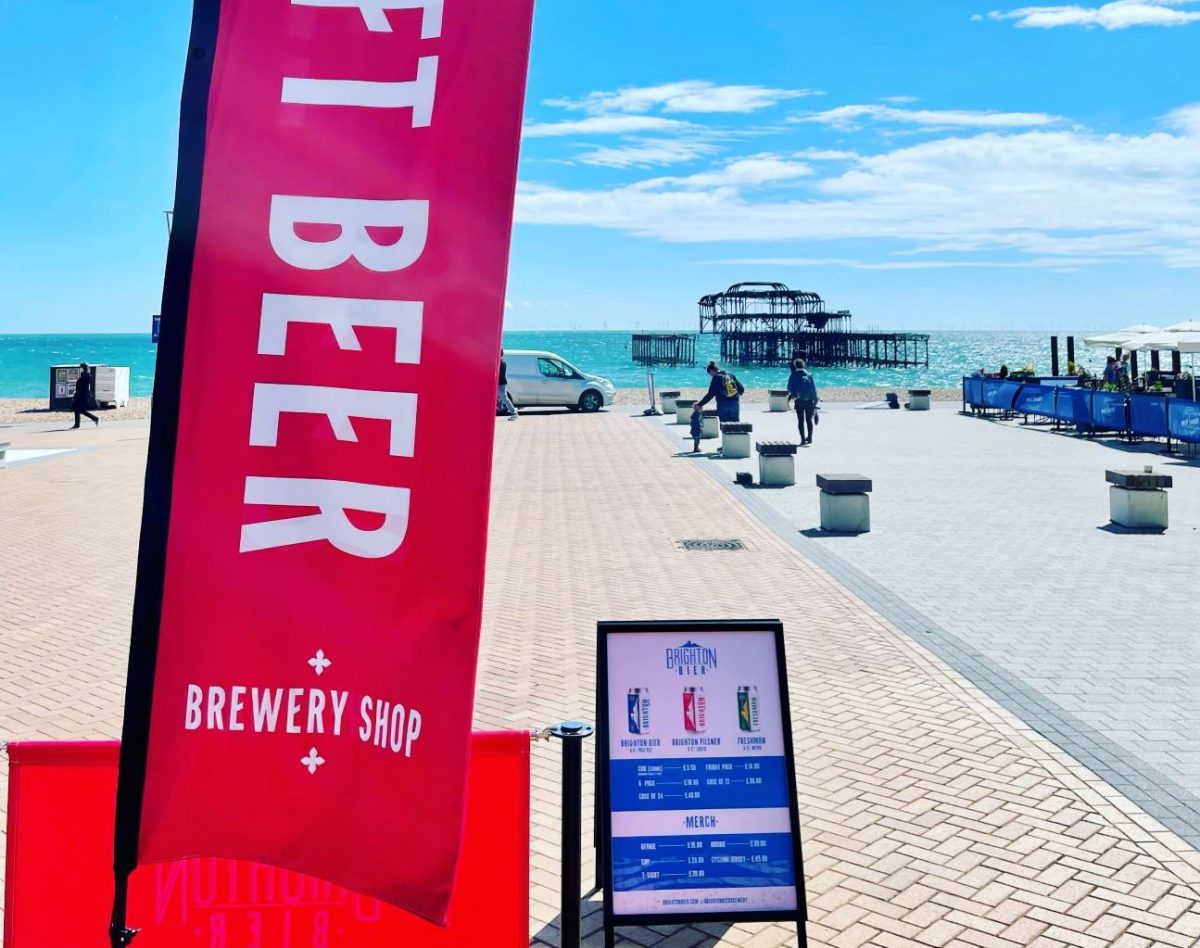 We catch up with owner Stephen to find out what the craft beer (or should I say bier) company have been up to since the pandemic.

When did Brighton Bier start brewing?

Brighton Bier began brewing in 2012 in Kemptown and we moved to our current premises just down from Sussex Square in late 2014. Over the last decade we’ve seen the craft beer landscape evolve dramatically and the local scene here in Brighton has changed so much in that time. There’s now a growing number of brewers in the city and we have a really vibrant craft beer scene which is fabulous to see, whereas when we started we were the first commercial brewery in the city since the 70s.

As a brewery, we’ve always embraced the attitude, ingredients and flavour profiles of modern progressive beer styles and breweries from North America and beyond brewing Pale Ales, IPA’s (West Coast and NEIPA), Porters and Stouts. I’d like to think, we specialise in building big flavours into beers with high drinkability at sessionable ABV’s, making them approachable and affordable.

Over the years we’ve been fortunate enough to win a number of international awards, which is very humbling as the beers are blind tasted by some of the top people in the industry. Last year one of our beers FAT BOY STOUT won ‘World’s Best Milk Stout’ at the World Beer Awards. That was a pretty big deal. We’d won a few Golds and ‘Best in the UK’ before but never the overall title, which is a great accolade for Gary the Head Brewer and Founder of Brighton Bier.

In addition to the new taproom at the brewery, we also run the Brighton Bierhaus, on Edward Street not far from the Pavilion, which has over 100 beers available and the Haus on the Hill in Hanover, which just won ‘Best Roast’ at the BRAVO Awards. We’ve also recently opened a shop on the beach next to the i360 and opposite the West Pier selling cold beer gifts and merchandise.

The pandemic feels an age away yet we are still feeling the economic consequences.

How did Brighton Bier cope and adapt during this period of restrictions?

The pandemic was a really difficult time for everyone across all walks of life and it was very tough for the brewing industry. We did what we could to be nimble and try to constantly adapt to lockdowns and the changing restrictions. I’ve got more grey hairs now, but hopefully we’ve managed to navigate the difficulties and can now focus on the future. We’ve now got a home delivery service with online orders delivered by local zero-emission heroes Zedify and most importantly have transformed the brewery with a new state of the art brewhouse from one of the US’s top manufacturers and a brand new taproom following the amazing popularity of our pop-up last summer.

It’s great to see the Brewery with its extended outside seating. For anyone new to the area or looking to venture down, what can they expect and what street food offerings do you run?

We’ve transformed the outside of the brewery into a colourful beer garden at the weekends, we’re lucky that Aroe painted our containers outside as well as doing an amazing piece of art down the length of the brewery inside. We’ve got seating for about 50 people outside and a similar number inside which makes the taproom a great space year round regardless of the weather. We’ve always believed that craft beer should be fun, and I’d like to think we’ve created a really fun space at the brewery. We’ve got an incredibly diverse range of customers which is wonderful to see and is what we believe beer should be all about.

In terms of what to expect at the taproom, we have new beers launching almost weekly, 8 ever-changing draught lines and a fridge of guest beers plus other drinks for non-beer fans, a couple of retro consoles (PS1 and N64), foosball and corn-hole (the Ultimate American tailgate party game), chesterfield sofas if you grab them early enough, and street food at weekends.

The taproom is open from 5pm – 10pm on Thursday and Friday and then from 1pm to 10pm on Saturdays. Through the summer we’ll be opening on Sundays from 1pm til 7ish with a laid back vibe so expect to see bloody marys hitting the menu, beer flight deals, plenty of great vinyl, Sunday papers and the best crisp butties in Brighton!

The number 1 and number 7 buses stop right outside the brewery so its incredibly simple to get here, but if you fancy a stroll then we’re just off the seafront by Black Rock and personally I’ve always loved just meandering through Kemptown so we’re a very easy walk from the centre of Brighton.

You have a new shop on the seafront next to the i360. What can I buy on my way to the beach?

The new beach shop has been a lot of fun pulling together. You can buy beer (of course) as well as a great new range of merch, books on beer and also for the gamers out there we’ve found some beer board games. We’ve also been collaborating with local producers, so we’ve got some candles we made with Green Valleys and are launching a new hot sauce using one of our beers with Brighton Hot Stuff who make amazing sauces.

Over the summer we’ll have tables outside the shop, with one of the best beach views in Brighton, and we’re giving 10% of the sales at these tables to ‘Save the Starlings’ who are raising money to try to reverse the massive decrease in the Starling population and so save the amazing murmurations we see over the Piers in Brighton.

What’s your best seller? (and do you do gluten free beer?)

Our best seller is a FRESHMAN, which is a very easy drinking, juicy hazy 4.5% NEIPA and a beer that we just can’t make enough of!  We don’t currently make any gluten free beers, but it is something we’re seriously looking at so stay tuned for updates on that post-summer. The vast majority of our beers are vegan though.

Any upcoming events we should know about this summer?

We’ve got a busy calendar of events planned through the summer details of which can all be found on our website and our attention is already turning to Oktoberfest ideas at the brewery and the World Cup. You can also hire the brewery on certain days for private parties or events.

If customers bring a copy of this BN1 magazine with them we’ll give them 10% off their first round at the brewery and we’ve actually just launched a new reward programme which you can sign up to on the website or in any of our venues which enables you to earn stamps every time you make a purchase at the Brewery, Bierhaus, Haus on the Hill or Beach Shop with various prizes and special promotion deals for members when we launch new beers.