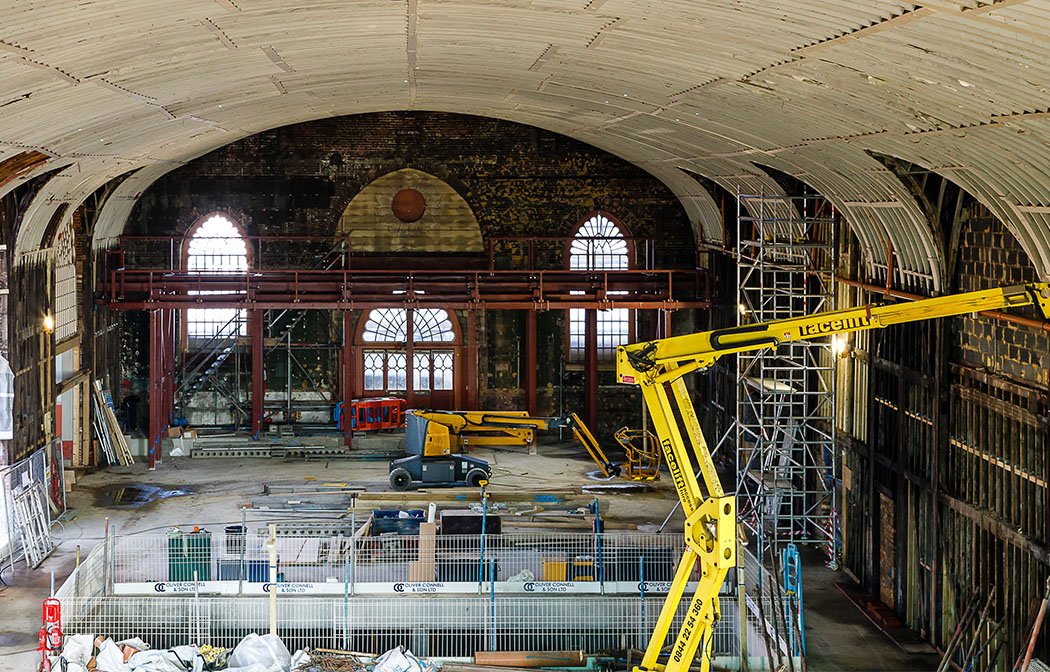 The story of Brighton’s Dome and Corn Exchange is inexorably entwined with the city’s own development. Beginning as a lavish riding school and stables, these two buildings gave the Prince Regent a thirst for Eastern opulence, inspiring his Royal Pavilion’s remodelling into an utterly unique landmark. Brighton’s reputation as place where dreams flourish, no matter how outlandish, was sealed.  Now owned and operated by the city as arts venues, their reach is remarkable.

From Let’s Dance to Van Morrison and Patti Smith, a huge audience spectrum is engaged. “It’s extremely precious in the way the city has positioned itself and told its story,” Andrew Comben, Brighton Dome and Festival’s chief executive, tells me. “Everything else which has come off the back of it, from the serious to the frivolous, from the hipster reputation and the exotic, the creative and fashionable to the slightly seedy, all of that is  wrapped up in the Royal Pavilion Estate. And it’s vital that we preserve it.” The Corn Exchange’s custodians have been looking at its long-term liabilities – a mammoth and sobering exercise.

In its time, the Corn Exchange has hosted hospitals, concerts, conventions and a United Nations conference. Subsequently there’s years of zealous remodelling to be addressed, rather than a few holes to patch. “It was very clear that we needed to plan for some major interventions,” Cobden adds. “Ensuring the roof was stable and that parts of the building weren’t subject to flooding.” Stirling Prize-winning architects FCB Studios were engaged to create a vision for the future which embraced the building’s heritage. Around 18 months into a huge restoration project, and this historic structure is still presenting surprises.

A few features survive from  1808. Renovating these to any former glory is an intricate and loving task. Renowned for their work on environmentally sensitive and sustainable buildings, FCB previously helped restore Windsor Castle. Together with contractors R. Durtnell & Sons, the oldest building firm in the UK, they are finding features like the timbered ceiling offer a unique set of challenges. Now covered in lead paint, its 18m spans are being delicately stripped back. “It’s a 200-year-old barn, for want of a better word, which has been given various facelifts as it’s been handed over between generations,” says project architect, Tim Healy. “The story we’re trying to tell is how it was used and celebrated by the Prince Regent. Whilst we’re not going to have sawdust on the floor, we are taking it back, as near as we can, to how it would have been then.”

A core aim of the work is to offer a physical expression of how Brighton Dome delivers art to the community. Creating an open frontage on New Road, with a café/restaurant overlooking both the street and Pavilion Gardens, offers a different access point for the venues and the wider Royal Estate. Further into the building will be new foyer spaces, utilising a unused area once hidden between the Corn Exchange and its sister Studio Theatre.

Here will be an incredible atrium, opening up the two huge windows in the Exchange and allowing natural light to flood in.  FCB have cut an incision into the building’s fabric and dug a huge basement, to bring the complex together and unlock its full potential. “Everyone’s well aware of Brighton Royal Pavilion,” says Healy. “But, I think there’s a greater story to tell with the Dome and Corn Exchange.”

Improving conditions for both audiences and artists, the language of how those spaces connect is honest and open. Additionally, an ingeniously designed new creation area will host resident companies and associated artists, encouraging new work and offering a home and support to a range of other initiatives.

These new spaces create a hub for everyone who is interested in what arts and culture can offer the wider community. “The venues are a really important meeting point and asset, but ultimately it’s what we do with them matters,” say Comben. These help the Dome and its partners to reach out to the city and lives. Already they enable indicatives like Miss Represented, where venerable young women at risk of exclusion can find a voice through arts and  culture, take performance to the suburbs through YouPlace with Brighton People’s Theatre and platform personal narratives with Storytelling Army. “We shouldn’t underestimate the barriers that civic building and arts organisations can put up to people,” adds Comben. The Corn Exchange, Studio Theatre and Dome are all public assets, so it’s important everyone knows they are welcome to come in.

Brighton Dome and Festival face the same financial challenges endured by all UK arts organisations. Creating a sustainable future for the Corn Exchange is costing a cool £21.2 million. A substantial percentage of this was secured from the National Lottery through Arts Council England, Heritage Lottery Fund, Coast to Capital Local Growth fund and several trusts and  foundations, meaning 90% of the funding is in place. A public funding appeal has just been launched, seeking to raise £252,000.  “We want everyone to feel they’ve had a part in the restoration of these buildings,” say the Corn Exchange. “Every donation, small or large, really helps.” Public donations to this ‘Build Brighton Dome’ community appeal will also be matched pound for pound by The Roddick Foundation.

Walking around the site, you realise how much is involved in this mission to reunify the whole estate. As work continues, it’s been revealing glimpses into the past. A historic paint analysis is being carried out, to examine the previous refurbishments, while archaeologists are still making discoveries about how the building was used and viewed. Even now, from car parking to restaurant staff, 1,241 local jobs are directly impacted by these venues and the attendant activities surrounding this one-time market. That’s not to mention the multitudes entertained, informed and inspired by events it stages. Bringing these antiquated and esoteric structures into the 21st century has taken a design which is brilliant, both in its sensitivity to a heritage building, and the way it brings an innovative openness to a much-loved Brighton landmark. “It’s going to be phenomenal,” says Healy. “Everybody  you talk to on site, from each different trade, they are really excited by it.”

New Queers On The Block returns for 2020

All you need to know about Burning The Clocks 2019

A Christmas Carol at The Spire