For the first time in its ground-breaking 53-year history, Brighton Festival has been cancelled for 2020. The largest annual, curated multi-arts festival in England, over 120 cultural events were scheduled across the region, including 17 premieres, commissions, co-productions and many Festival debuts from international artists were scheduled for this year. Led by Guest Director Lemn Sissay, it aimed to build an ‘Imagine Nation’ with the help of a diverse range of artistic talents from across the planet.

As a small consolation, we’ve asked a few of the people involved in the Festival to pick a few unforgettable moments from past years.

Since I joined Brighton Dome & Brighton Festival 12 years ago, I’ve been to so many incredible events it’s difficult to choose one specific highlight. One event that stands out in my mind and perhaps for many of the thousands of visitors who witnessed it was Dr Blighty, an immersive installation that transformed the Royal Pavilion building in 2016. Produced in collaboration with Nutkhut as part of 14-18 NOW to commemorate the First World War Centenary, Dr Blighty recalled the unexpected episode in Brighton’s history, bringing together the experiences of Indian soldiers and local people who cared for them. It was such a moving tribute and will always stay with me as an iconic Festival moment.

This particular performance stands out for me because it was epic in so many ways. The piece was composed by the late Sir John Tavener, who brought together a cast of nearly 400 singers including local choirs. John positioned them all around the concert hall, with some actually up in the Dome roof, to create an immersive surround sound experience.

In the final section, an additional 250 singers poured into the hall and joined in with a Persian chant as they processed out of the building, leaving the audience looking mesmerised by the whole event. It was probably one of the most complex pieces we have ever staged in the Festival’s classical programme and it really changed the perception of how classical music can be presented to audiences. 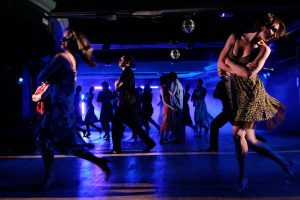 This event encapsulated everything I love about the Festival – dance, theatre, storytelling and music, all brought together in the beautiful Grand Ocean Hotel in Saltdean which added a dramatic and mysterious atmosphere. What made it special for me was seeing the performance with my Festival colleagues. We all travelled there together on the bus and I think it completely changed our attitude to what the Festival can do and how art can affect audiences. A few years later, me and my husband walked up the aisle to Utopia by Goldfrapp which is played in the final scene of the production, so I always connect the event to our wedding day.

I had only moved to Brighton a couple of years beforehand, so 2018 was my first year of experiencing the Festival as a working photographer. The Festival had loads of great artists playing that year, including the phenomenal Ezra Furman, but the highlight for me was a double whammy of British soul collective Jungle with support from singer Rae Morris. The stage was flooded with bright light and the band were silhouettes against the stage for most of the night, but I managed to get a shot that captured the party spirit! I can remember the famous old Dome building shaking to the sounds of thousands of dancing feet.

For the Birds, Hollingbury woodland, 2017

Some of my favourite aspects of Brighton Festival are the outdoor events and one of the most memorable was For the Birds, produced by artist Jony Easterby in partnership with the RSPB. The sound and light installation took place after dark high on a hill in Hollingbury. The woodland was transformed into a magical and often meditative world of birdsong and stunning visuals, with a surprise around every twist and turn of the paths. Experiencing an aspect of Brighton’s landscape in such an extraordinary way left me thinking more about our relationship to nature and it was one of the most talked-about events of that year’s Festival. 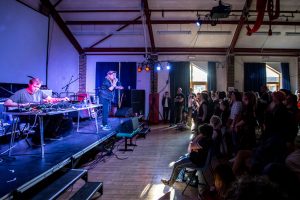 When Kate Tempest said ‘ye’s to being guest director in 2017, I knew we were on a journey to something amazing. It was her passion that no ‘velvet rope’ should come between people and their creativity that inspired her idea for ‘Your Place’, taking the Festival out of the city and into the communities of Hangleton and East Brighton. When she performed at both locations, electricity radiated around the room and an anonymous audience became a powerful community of common experience and joy. All barriers disappeared. I will never forget when she finished her set, no one left. We stayed, said hello to each other, talked to people we had never met before, we were all elated.  It was the best feeling ever.

Brighton Festival will still be streaming content online during the 2020 lockdown. For more details, head to: www.brightonfestival.org

ABOUT US
BN1 Magazine is the leading source of entertainment and lifestyle news in Brighton & Hove. From comedy and theatre to clubbing, music and festival line-ups, we cover a range of events across Sussex and beyond. We can help you find a fabulous vegetarian restaurant, catch an amazing new band at The Great Escape and see a hypnotising performance at Brighton Fringe. Sometimes all in the same weekend… Whether you’re a student and new in town, trying to pack plenty of family fun into a visit or a local planning a massive night out, we’ll tell you everything you need to know. From pubs and bars to art and shopping, it’s time to kiss those lonely blues away in one of the world’s most interesting cities.
FOLLOW US
© Copyright 2019 BN1 Magazine. All Rights Reserved. >Privacy Policy
MORE STORIES
CULTURE