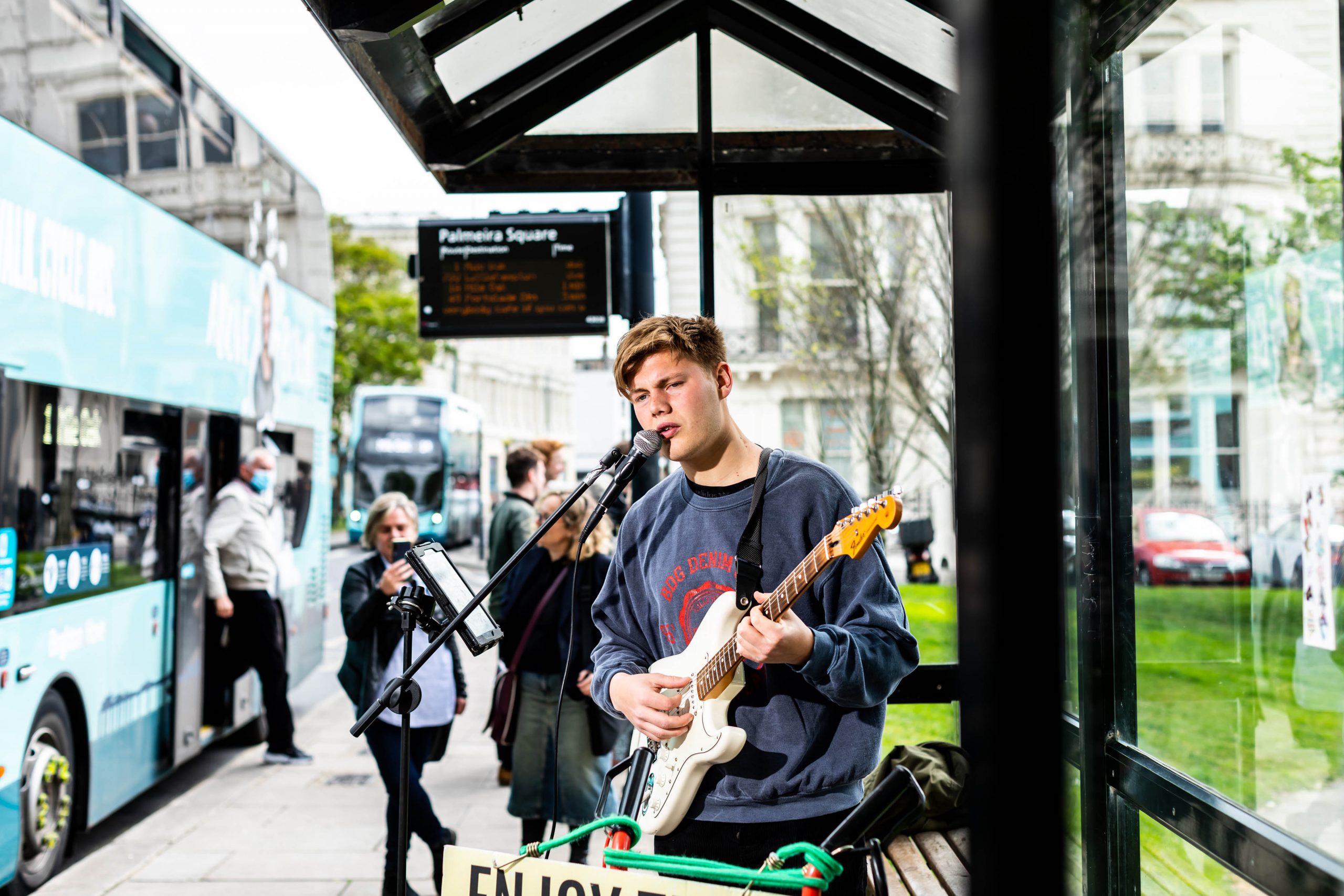 The streets came alive with the sound of music from today (May 17), as busking became legal again across the UK and public transport capacity increased.Licensed street musicians are once more be permitted to perform, and to accept donations, in towns, cities and at railway stations, bus stations and stops – as long as social distancing is respected, and large crowds avoided. Their return comes alongside a return to commuting for many workers and an increase in the frequency of buses and trains. From today, buses can allow more people on board with relaxed social distancing guidelines.

The government has said all forward-facing seats can now be used by people sitting side-by-side, as they can on trains and tubes. But many guidelines remain, including wearing face coverings (unless exempt), no standing passengers and respecting hands-face-space, where possible. Rear-facing seats and seats within 2 metres of the driver must also stay empty.

To celebrate music on the streets, the bus company teamed up with Brighton music college BIMM to showcase new talent. Josh Robinson, 22, is a guitar player and singer who has been busking across the South East for nine years. He is a familiar face around Brighton and a recent graduate from BIMM.

“It’s my main source of income. During lockdown I’ve been concentrating on writing but it’s amazing to be back out in public again. People can often overlook how important buskers are for towns, but we play a role in entertaining people, cheering people up and connecting with the community. I’m looking forward to seeing some familiar faces again.”

Alysha Hutchings, 21, is student who began busking in towns in Hertfordshire and Essex as a teenager and now busks regularly in Brighton. She said: “The whole point in making music is to enjoy the reaction and to interact with the audience. To not be able to do that for a year has taken the whole joy out of music. “It will be wonderful to be out performing in front of people again.”
To celebrate the occasion, Josh and Alysha performed today at Brighton & Hove’s Palmeira Square in a socially distanced event under Covid regulations.Martin Harris, Managing Director for Brighton & Hove and Metrobus said: “Busking has been an important starting point for some great artists like Luke Cresswell, who was behind the amazing stage show Stomp! There’s some serious music talent on the city’s streets.

“On another note, I am so pleased we can welcome more people back on to our buses, which are clean, safe and ready to go. It’s an encouraging sign.”

Together the People 2016 in pictures

“Busking is the lifeblood of our towns and cities. It is fantastic to see its return. This is how so many young musicians get their break and we have missed them sorely. I hope we will all show our appreciation!”

Busking is legal for anyone over 14. However, in many parts of the country, street musicians need to apply for a licence from their local authorities. They do not need a licence in Brighton & Hove. At stations and rail depots, buskers must seek permission from public transport operators in first instance.
Profiles
Josh Robinson
Josh began busking with an acoustic guitar in his childhood town of Hemel Hempstead at the age of 14 when he only knew one song – Free Fallin’ by Tom Petty. Within days, he was able to make enough money for a microphone and an amp, setting him on the road to a music career.

Alysha cites Christina Aguilera and James Brown as influences. She sings, often accompanied by a guitarist, and either busks or plays at gigs up to four times a week. Her first busking experience was in Hertford, close to her home town in Essex, and she’s now a final-year student at Brighton’s BIMM college.