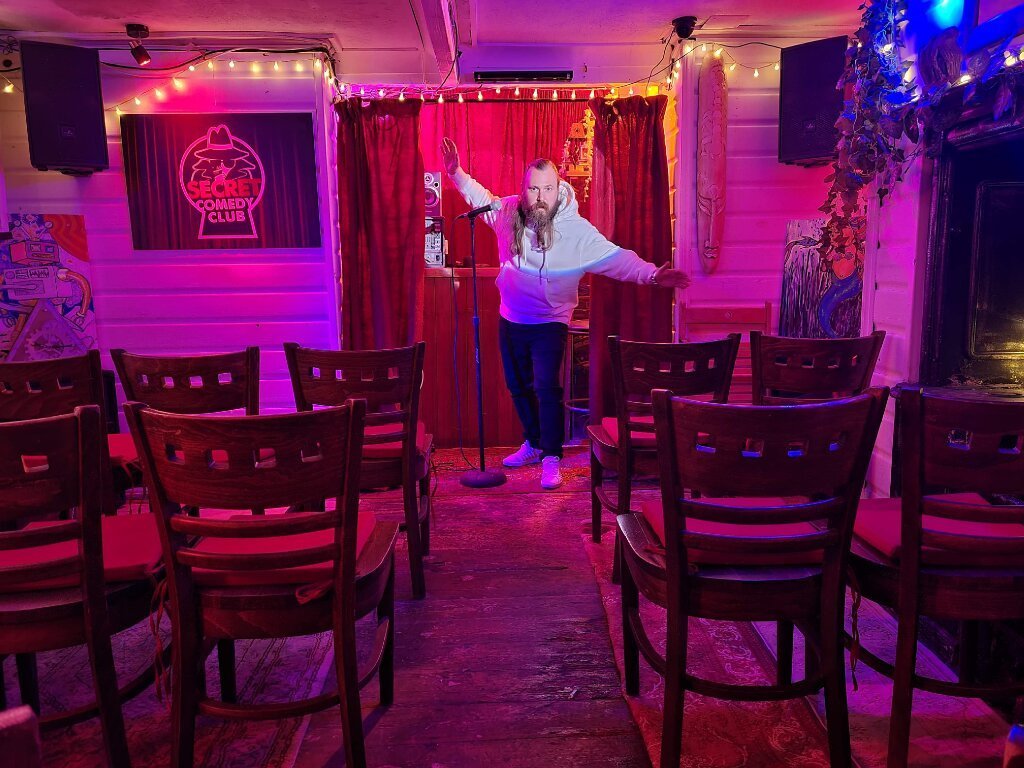 Up a small, quiet street by the i360, my photographer and I were looking around for the Brighton Secret Comedy Club, realising in the process, why it got its name. If we had not spotted the Comedy Club signs amongst the busyness in the window of the venue, we would have easily mistaken it for a cosy café or a quirky flat. But luckily, we found it.

We had arrived quite a bit early, so we decided to take a seat on the curb outside of the building to just look over our questions. Then out pops a short Portuguese man with a smile reaching from ear to ear. “Are you ready to come in or are you having a fag?” We laughed and jumped up from the curb to follow him into the venue. He had a long, full beard and hair longer than mine and it almost felt as though I was about to get a tour of the lonely mountain from Gimli himself.

We walked into the bar area and got hit by complete randomness. The room was filled with a mixture of colourful and bizarre objects; you didn’t know where to look. As well as the bar full of booze, there were bongos, water guns, Portuguese vases, Buddhas, abstract posters, plants and lots of objects shaped as chickens. You felt like had just you walked into an eccentric, wacky person’s home.

This was certainly the vibe that Alexander, the owner, wanted to create. “I think that has been my main selling point, the homeliness of it, because literally, that was my dad’s, that was my grandmother’s. Everything in here has come from my house in Portugal. Almost everything has a story. And, I don’t know if you believe in this kind of stuff or not, but picking up the energy of being in people’s homes. It has that a little bit.”

The venue was just so Brighton. It felt as though Alexander was destined to live in Brighton, and he brought the passion, good hospitality, and culture of Portugal with him. “It is very different when it comes to comedy nights, you know, some people get scared if they are going to get talked to and there is a lot of apprehension when people go to comedy clubs. I try to make them feel as comfortable as possible and just say hello to everybody and say goodbye to everybody, and just give a friendly kind of vibe. I think it comes quite naturally, because in Portugal, we are very hospitable and we are always the big hosts that are happy to have everybody.”

It is true. Alexander is an excellent host during the comedy nights as he not only serves drinks, but he also orders pizzas from the Italian place across the street for the audience and comedians. However, the relationship between the Italian pizza owner and himself, a Portuguese, can become slightly heated, “He [the Italian pizza owner] has the best pizzas in Brighton, but he’s so Italian and sometimes I can’t deal with him. Me being Portuguese, we end up clashing, like, ‘man don’t act all Italian with me or I’ll start acting all Portuguese with you, and we will fall out. We are going to have a little Latin falling out here.’”

He then led us towards the LED-lit stairs going down into the basement, which is where the stand-up takes place. It felt as though we were walking into the secret garden, down the little staircase and into a warm, cosy room. I knew that if I were to attend a comedy night here, it would feel like the rest of the world did not exist. It is so secluded with such a familiar and warm energy that you don’t feel like you are at a comedy club, it feels like you are watching it with your mates at home.

One thing I always find interesting is the opinion of people in the industry on the lines and boundaries comedy is allowed to cross and the meaning of comedy itself, and I found that Alexander’s views were so interesting and so honest. “As long as people are funny, I try as hard as possible not to not book people, because as long as what they are saying is funny then it is funny. That is one thing that I personally try to stick to in comedy right now, because I found the freedom of speech element of comedy was getting a little bit watered down over time. I feel like there is a comeback now, that people are not really into it anymore, but there was a time where people shut things down too much and wanted to shut comedians down. It is like, ‘if you don’t like it, you are perfectly fine to leave, you don’t have to shut it down for everybody else.’

“That is one thing from comedy which I like, because I think that comedy is supposed to be the place where you satirise society. In order for people to able to do that, you need to be able to say whatever you want to say. That is the only way. Historically, comedy is keeping politics and kings and other people in check, by funny plays or funny this or funny that, where they are satirising what is going on. It has always been heavily political, comedy. And I think it should be. There seemed to be a moment there, where it did seem to be in jeopardy.”

We left the interview feeling like we had found a really beautiful and hidden venue which provides such a unique experience. What I took, as to why the Brighton Secret Comedy Club is so special, is its variety in comedy and its intimacy. “The amount of times a group of people have all met here and then gone to get drinks together afterwards is just really nice. It is a friend-making place.”

It is open from the 17th May and there are comedy nights hosted every Tuesday, Wednesday, Friday and Saturday, and each night is a little bit different, from booked comedians to open mic nights. So, if you are into comedy and looking to have a night of laughs with your mates or a date, make your way to the Brighton Secret Comedy Club and expect a wonderful evening as it truly is Brighton’s hidden gem.

Find out more at www.artistacafe.gallery