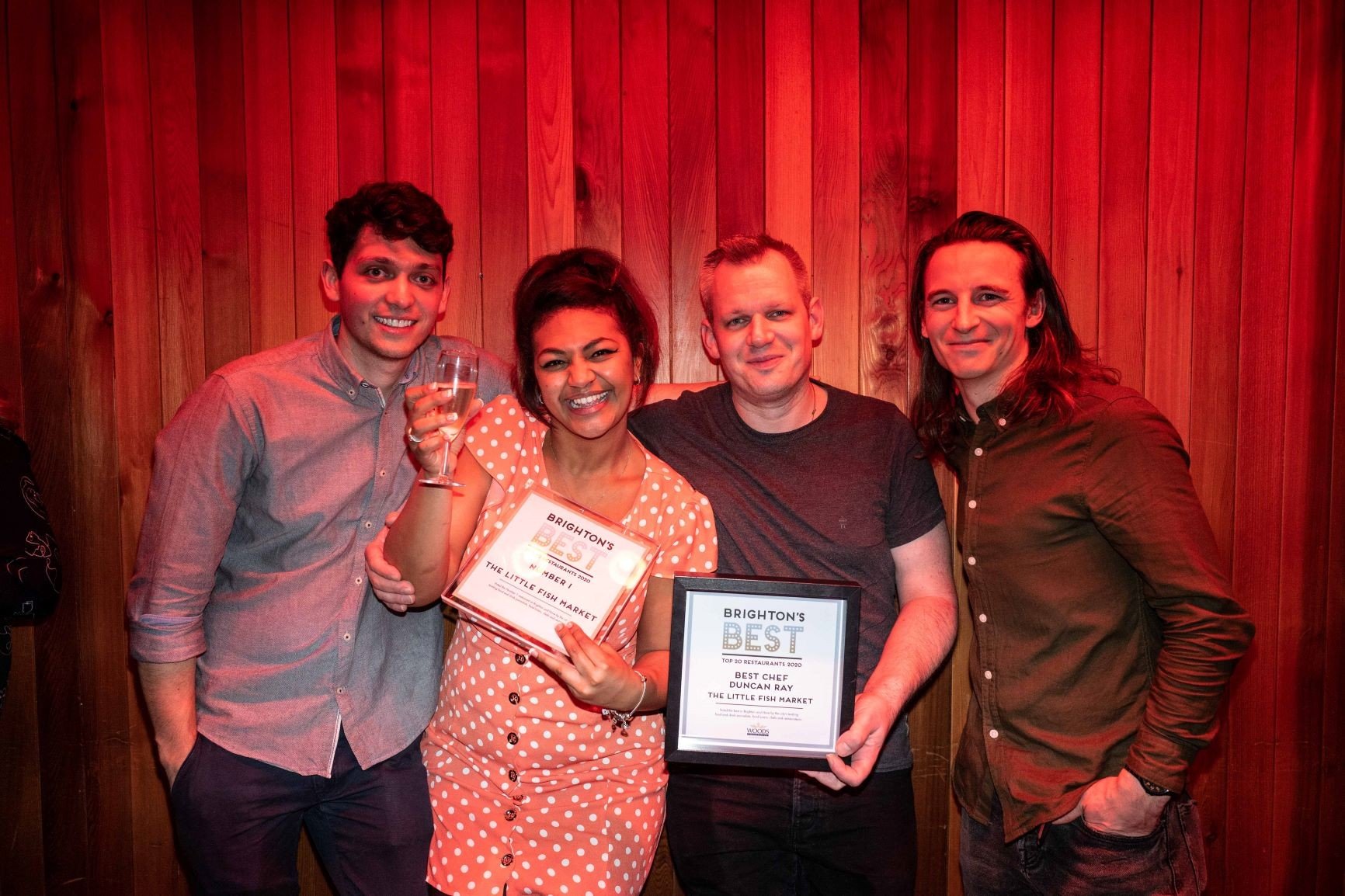 ‘It means the world to us to be in the Top 20. The love in the room was incredible,’ said Thompson. ‘We were delighted to win Best Wine List because we’ve positioned ourselves as a restaurant that specialises in wine. The Brighton restaurant scene is booming, it’s massively competitive now and we just want to carry on and continue to be a part of that. Roll on next year’.

However, Wild Flor couldn’t prevent perennial favourites – fine dining The Little Fish Market and authentic Japanese-style Izakaya restaurant Bincho Yakitori – retaining their respective number one and number two spots; four years in a row for Bincho and three for Little Fish, whose chef and owner Duncan Ray also picked up the Best Chef prize for the third year in a row.

Announced at a packed ceremony held in central Brighton in front of the biggest crowd in the event’s history, the awards also saw a further three brand-new entries to the top 20 list: The Flint House, the latest addition to the Gingerman restaurants group serving small plates with exciting wines and great cocktails; northern Thai specialists Lucky Khao; and The Paradiso Social with their imaginative sharing plates.

TV chef and former Michelin star holder Matt Gillan won the Best Out of Town award for Heritage, his chic restaurant with rooms set in the picturesque village of Slaugham in West Sussex, where his Great British Menu-winning goat-based dish “The Herder” is one of the many highlights.

‘It’s been the best year to eat in Brighton that I can remember in 30 years of living in the city. Choosing which restaurants to vote for was trickier than ever,’ said Brighton Best co-founder Andy Lynes. ‘It’s a tough time for the hospitality industry right now, but Brighton is showing remarkable resilience. We had nearly 100 different restaurants voted for by our panel, which just shows how deep the quality and diversity of Brighton and Hove’s restaurant scene goes’.

Now in its fabulous fifth year, Brighton’s Best Restaurants is well established as the premier restaurants awards in the city and the south-east region, and has been embraced by the industry and public alike. The awards are voted for by experts including local food writers, chefs, restaurateurs and business leaders, all of whom boast an intimate knowledge of the Brighton and Hove restaurant landscape. As with last year, the main voting panel was boosted by a ‘Super Jury’ of ‘Dedicated Diners’ – a group of Brighton residents hand-picked by the organisers for their prolific dining habits both in the city of Brighton and Hove and around the country. Votes are hand-counted by the organisers and carefully monitored so that panel members cannot vote for any restaurants they own or invest in, ensuring the list’s integrity.