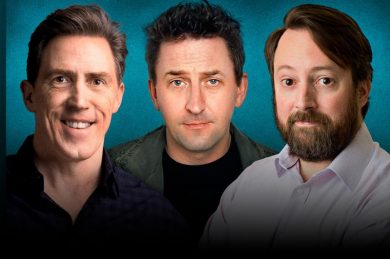 I am a big fan of the Would I Lie To You BBC show, so when I heard Brydon, Mack and Mitchell were coming to the Brighton Dome as part of their Town to Town tour, I jumped at the chance to find out what was in store.
Rob Brydon opens the show appearing on his own, with his flattering demeanour and family-friendly jokes, whilst flapping around the stage doing an array of impressive impressions, including Mick Jagger. Then after 10 minutes of flapping, he introduced David Mitchell and Lee Mack to the stage.
The setup was the three of them seated, in discussion, about what things annoy the people of Brighton & Hove after surveys and emails had been sent through before the show. Lo and behold – parking was the number one gripe Brighton folk had about the city. This format went on for a while as they tried to get the top answer from the audience and bringing a bit of competitiveness to the format.
The second half was more entertaining with the much-loved master-raconteurs interacting with the crowd. Questions or dilemmas were written on pieces of paper during the interval and read out randomly from Rob Brydon. This definitely increased the improv-vibe and gags thrown at each other, with Lee Mack striding into his element.
The first audience member asking how she can get her son to study for his GCSEs which led to hilarious solutions and outcomes from the three. Another audience member asked how she can visit her other half’s flat after not seeing it for over a year, which somehow led to more improv impressions from Rob Brydon (as you would expect!). Lastly was the amusing audience mention of an Ayahuasca retreat (a hallucinogenic drink if you didn’t know what Ayahuasca was, which the three of them were clearly unaware) sending Lee Mack off on a barrage of confusion and anecdotes.
Overall the evening was very entertaining with civilised banter from the three bouncing off each other in a well-thought-out setup which gets enough participation without feeling awkward.