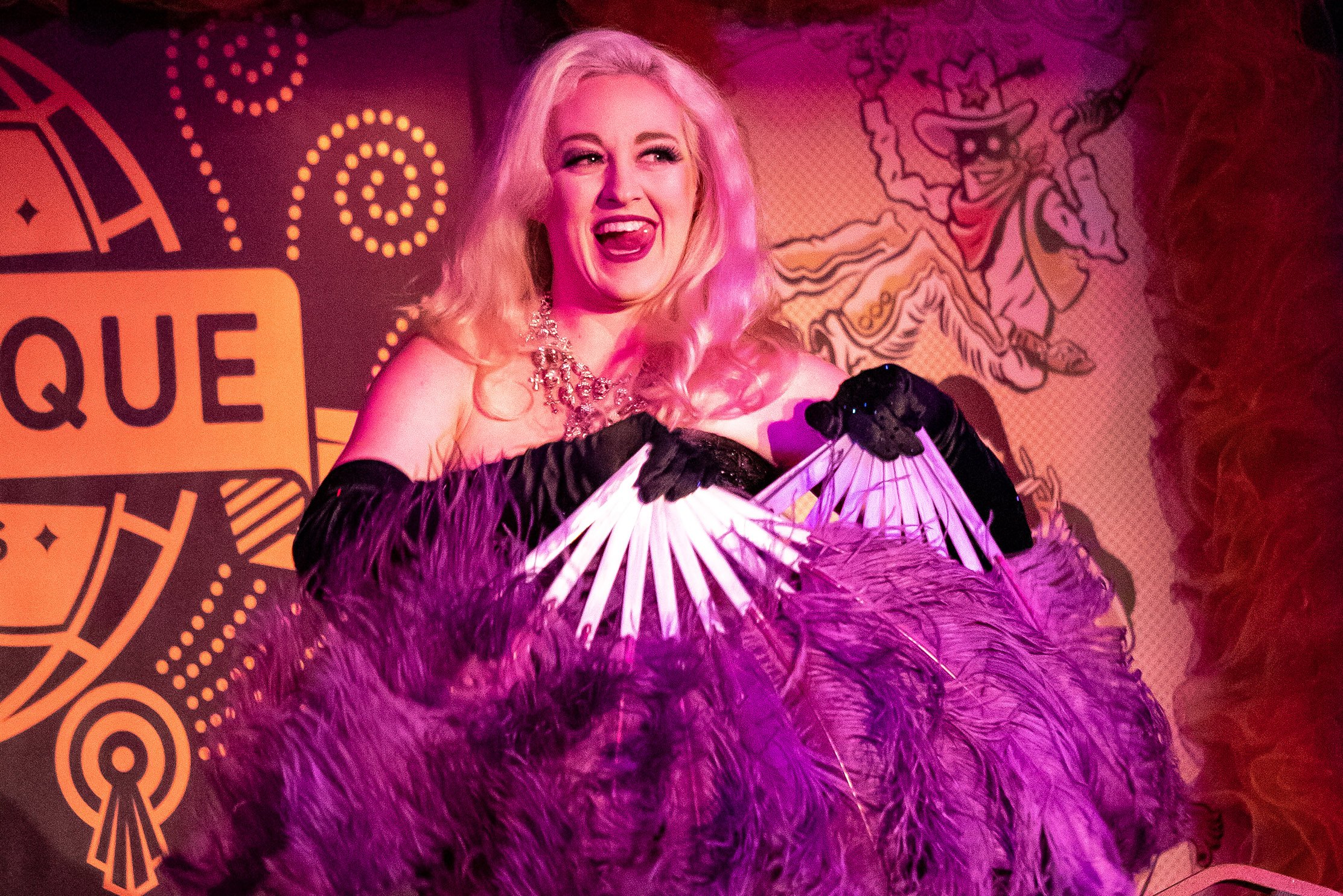 Living in Brighton, I stumbled across a Burlesque show in a little underground venue. There was such an array of colourful, sparkly, sensual and unique performances. I had been belly-dancing for eight years so I spoke to the organiser about performing as a variety act in the future. My first gig was for Carolyn Ailsa at Blind Pig, and it snowballed from there. I did my first Burlesque routine as a librarian for a back-to-school-themed show and it was liberating. I kept creating more characters, acts, and costumes, and here I am six years later with my own burlesque troupe, Foo Foo Fighters and have over 20 acts.

For the uninitiated, what happens at the World Burlesque Games?

It runs like a burlesque show, the host introduces the performers and they come on and perform their act, but it’s also a competition. There are four crowns: British, Variety, Alternative, and International. The competition is spread out over three days with a closing gala on the fourth.

What helped you clinch the British Crown?

Performing over six years has grown my confidence, stage presence, and professionalism. I think the premise was creative and strong, and people enjoyed it. But winning was a shock! The act is something I’ve had in the back of my mind for a while. It shows behind the scenes of a Burlesque act; getting to the venue, unpacking/faffing, performing, rushing home, with an internal monologue of intrusive thoughts. Burlesque is very glamorous, but people don’t see the rushing around, the late-night dash to catch the last train whilst eating chips and drinking a can of G&T. Most of us are on our own as solo performers with lots of travelling and dragging heavy suitcases, and I thought it would be fun to share that side.

Where’s the best place you’ve visited as a Burlesque performer?

Oh, that’s a tricky one. Different shows take me on different adventures. Belfast was fun. I did a show in Mansfield and had a stop-over in Nottingham where I found the oldest inn in England. But I think my favourite place is Edinburgh Fringe: lots of history, you meet so many amazing, creative people, and if you’re lucky you have time to catch other people’s shows.

Where do you get your outfits from?

I create my costumes myself. I try to find pieces in charity shops and online and then alter them with my limited costume making skills! If there are specific pieces like a headdress or item of clothing that I need custom designed, then I will work with designers or buy from costume makers.

How do people react when you tell them what you do for a living?

Very positive really, people are quite excited to hear what you get up to as a Burlesque performer.

What does a day off look like for you?

Has living in Brighton influenced your career in any way?

It catapulted me into the wonderful world of Burlesque for sure. Brighton is definitely the town to raise your freak-flag and find your tribe of creatives and weirdos. It allowed us to create Cabaret Lab, an open-mic for cabaret acts, where I have been able to test a lot of ideas in front of an audience.

Who do you credit with bringing Burlesque into the mainstream as much as it has?

I guess Dita Von Teese, everybody in the mainstream knows of her. I’m sure London Burlesque Festival has been a big influence, along with other international events globally.

What does the future look like for Burlesque, and for you?

I’m hoping it stays popular, because it gives people confidence, and it’s a bit of escapism. New sub-genres pop up like Nerd-lesque, Gore-lesque, etc., so I don’t think people will get bored of us just yet! As for me, I’m going to continue to create and perform as much as I can, as well as teach and inspire the next generation of Burlesque dancers.

What’s your favourite Christmas present that you’ve bought someone?

My fiancé Jack Kristiansen hosts cabaret shows and is known as the ‘Joker of Burlesque.’ I found a pair of Batman and Joker cufflinks which I got irrationally excited about, but the wait until he opened them was excruciating!